Titian spent three years perfecting Bacchus and Ariadne for the Duke of Ferrara because it was essential to showcase his talent outside of Venice. By the time he started it, he had been recognised as the top artist of Venice and appointed its official painter, but it was time to prove he was equal to his Florentine and Roman counterparts.

He intended to demonstrate he was the best living artist alongside Michelangelo, and not because Leonardo, Giorgione, Bellini and Raphael were dead by 1520 but because he developed a radically different style. He was aware that the new generation of artists mostly tried to improve on Raphael and Leonardo by adding long necks, stylised poses, and exalted postures, and believed their formal exercises were leading to a loss of emotional authenticity. Michelangelo himself famously lamented about young painters copying his ceiling in the Sistine Chapel, “My art will make a horde of artists petty fools”.

I was surprised to discover that there were plenty of videos and talks about this painting on the web, varying in length from 2 to 30 minutes with none explaining why it was a good picture.

Sometimes, the lack of explanation is compensated by an abundance of assumptions, some of which are surprisingly…insulting to the intellect of Titian. For instance, Mattias Wivel, National Gallery’s curator of 16th-century Italian paintings, in his 20-minute video on the subject, speculates that Titian added the bronze vessel and the lemon-yellow cloth in the bottom left corner as an afterthought. He hypothesises that Titian, having completed the painting, looked at it and realised that the bottom left corner was empty, and decided to add something to it to balance the composition. Really? Titian was working on the painting for three years, and at the end of the tunnel, he suddenly saw the light and realised he made a mistake that needed correction? No, the simple truth is that Titian worked on the painting on and off, juggling his commissions, and might have waited to see which tint to use on the cloth to highlight the bronze vessel better, only deciding on it when all the other colours were in place. Because the vase is not a mere device to put the author’s name on it, but the starting point for the whole conversation, as we will see in a minute. Other experts talk about the vividness of Titian’s colours or his mistake in painting the sails of Theseus’s ship white instead of black, and no one tells or shows what is so exceptional or innovative about this particular work. So, I suggest you watch the National Gallery video first and come back with your appetite wetted for answers. If you want a quick dive, here’s a three-minute video from Smarthistory:

If you want to move ahead immediately, here’s the long and short of the myth in question:

On Crete, Theseus, a young prince from Athens, kills Minotaur and escapes the labyrinth with the help of a magical thread that the daughter of Cretan King, Ariadne, has given him out of love. He promises to marry her. They sail to Athens and stop overnight on the island Naxos. In the morning, Theseus deserts Ariadne and sails off. She is left heartbroken when suddenly an uncivilised drunken group of people and creatures emerges from the forest. It is unclear if they are led or followed by Bacchus in a lion-driven chariot. It’s hard to say how much that clocks up in horse-power but must be enough to impress Jeremy Clarkson.  Bacchus falls in love with Ariadne at first sight and proposes on the spot. Ariadne tries to escape him three times, fails, and finally agrees to marry him because he’s pretty, insistent, has access to an unlimited supply of wine and promises her immortality in the form of a constellation. Who knows which one of the arguments tipped the scale…

I encourage you to read more about it because I don’t want to rewrite and repeat the wiki page. I intend to expand on it. Here’s the painting’s wiki page, and here are the original stories, by Ovid and Catullus. The two stories have differences between them but don’t try to “spell-check” Titian’s imagery against any one of them. None of the stories reflects what was really happening anyway. For starters, there are no forests on the barren piece of land that is Naxos.

Let’s look at the painting again and try to list everything that’s happening there.

Everyone (even the tiny characters at the background) is doing something, often performing multiple tasks. Ariadne’s body is running after the ship, but her head and mind are no longer there. Bacchus’s arms are still reaching out to his companions, but his body rushes to Ariadne, and it is done on such a powerful impulse that he abandons any attempt at a graceful leap. Even the cheetahs are exchanging glances.

The movement of characters goes in all directions, and I am sure you don’t need my arrows to feel the chaos. It is enough to meet the eyes of the faun boy to become a witness to the sudden partying. Do you know why it feels sudden? Because we read left to right, and this direction is expected. When it happens the other way around, we get disturbed by its “wrongness”.

You see, now the appearance of the procession is somehow more expected.

But whichever way I flip this painting, it doesn’t make it less chaotic. The paradox is that this easily-readable chaos is built on сrystallin-grid order.

To understand how Titian ordered it to make it look chaotic, we need to look for the Golden Ratio. Luca Pacioli’s Divina Proportione, illustrated by Leonardo, was published in Venice in 1509. It became a huge influence on artists the moment it went off the press.

The Golden Ratio line separates the painting in two parts. On the left side, we have love. It is love at first sight between Bacchus and Ariadne, and something akin to work-place flirtation between the cheetahs. Contrary to what the National Gallery says about them, Titian did not portray the cheetahs from live models in Alfonso’s Zoo. Shortly before Titian completed this painting in his studio in Venice, he was assisting Alfonso’s ambassador to shop for antiques and rare objects, and the list had cheetahs or leopards on them that they failed to procure. It is logical then that Titian saw the chance to satisfy his client’s unfulfilled wish at least in the painting, and replaced the lion that was meant to drive the chariot with this flirting couple. On the right side, we have the party, but another Golden Ratio line splits it into two parts as well. The group on the right side of it is oblivious of the love story unfolding in front of them – they keep doing what they had been doing before Bacchus fell in love and leapt off his chariot. The middle part is interesting. It engages with the love storyline through Bacchuses body movement, the inquisitive glance of the girl with the cymbals, and connects to the viewer through the eyes of the boy faun. 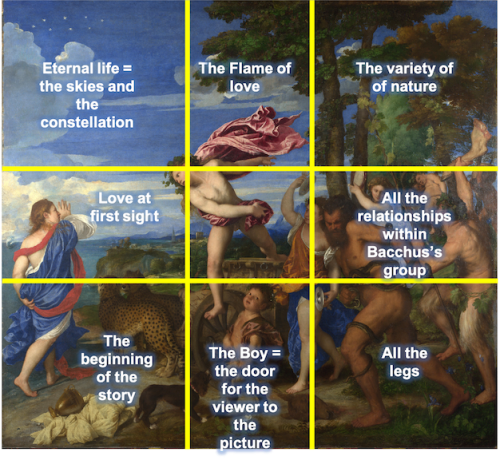 This drawing is self-explanatory. I especially like the cat-door opening for the viewer. The boy looks at the viewer from a separate space, and if you manage to crawl in there no other character in the picture is going to notice you. If anyone else among the group looked out at the viewer, the effect would not be the same because the cat-door wouldn’t be there.

As for the bottom left corner, indeed, if you thumb out the bronze vessel and the lemon-yellow cloth you’d get a dull spot. But this is the point from which the story grows. The vase is a symbol of lost love.

When Titian painted his Profane and Sacred Love in 1516 for his future friend’s wedding (they didn’t become friends right away), he showed the vessel filled up with water from the well of love.

In Venus and Adonis – showing the moment when the two lovers part forever – a similar vessel is shown upturned in 29 out of 30 versions of the painting: 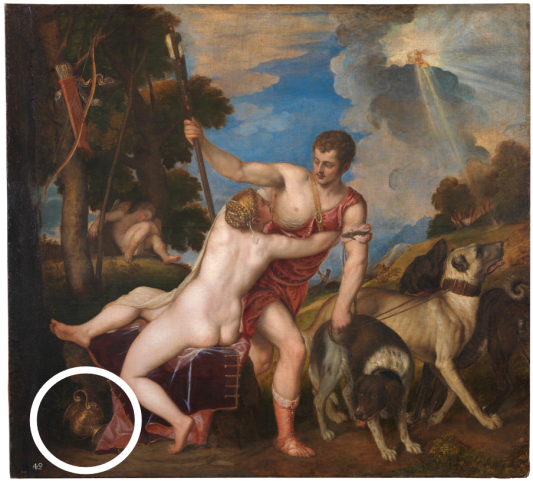 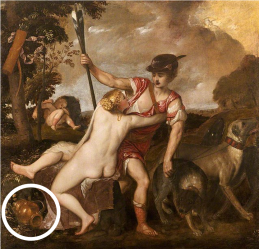 The vessel is the symbol of the lost love between Ariadne and Theseus – she leaves it behind to immediately find her new love, though in reality there was a lot of anguish and running along the shore before Bacchus appeared.

So, the vessel is explained, but what is the lemon-yellow cloth doing there? 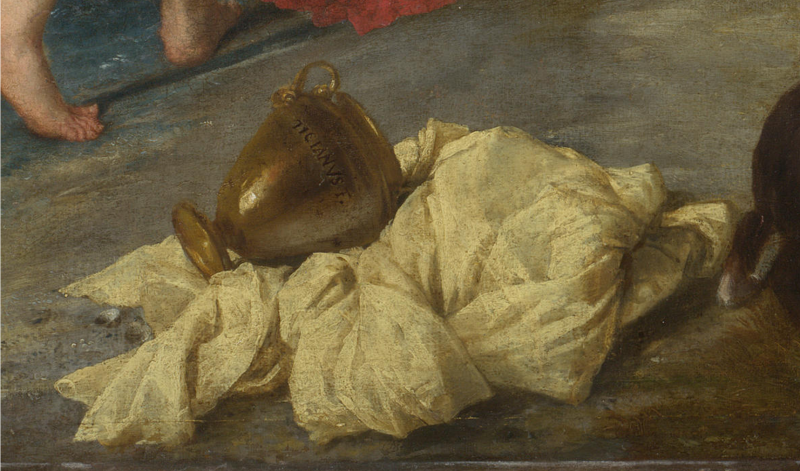 It is easy to assume that it is a crumpled bed-sheet, but no, there is no mention of a proper bed in any version of the story. The only reference to any piece of cloth can be found in Ovid “…and upon a long tree-branch I fixed my shining veil.” This is how Ariadne was trying to signal to Theseus that he marooned his bride on the island.

And indeed, I think it is a bridal veil, the kind that was common in 16th-century Venice:

It is not just her first love that Ariadne is leaving behind, but – true to the myth – her wedding.

Someone should let Mattias Wivel know this.

I’ve talked about the structure of the painting, but it is just the first part of the story. In the second part, I will talk about the illusion of movement and dynamics that Titian created in it, and not just using multiple diagonals.

In the meantime, you can try to think of all the diagonals Titian used to create this dynamic scene but don’t forget to come back in a couple of days for Part II.