Some time ago, I wrote about my dislike for socialist revolutions because they are inspired by the intention to make the world a better place but come at the expense of freedom. Then I promised to discuss what it may mean for the arts and artists. And then I was overwhelmed by work – and I am sorry for the time-gap.

Regardless of my dislike for socialist revolutions, they are objective reality, and not because Marx believed that under-performing capitalist countries are turning their workers into proletariat who have nothing to lose but their chains. The US is not an under-performing capitalist country, is it? And still, the growing popularity of Marxism is quite visible. An alternative theory posits the necessary – and often sufficient –  condition for a revolution is a surplus quantity of disgruntled and disenfranchised youth, and this seems to be the case today.

It’s great if the youth’s energy can be channelled towards something different from the change in the social order like it was back in the late sixties when the Western world rock-and-rolled into the sexual revolution. Today, it is directed towards statues. Tomorrow, it may overthrow a few parliaments and much of common sense. Who knows. What is known with certainty, though, is that almost everyone is worse off in the post-revolution world.

Indeed, the only industry that is known to benefit from revolutions is the arts, if not in terms of sales volumes, then through the emergence of new, forward-looking ideas, as the demand for artistic output both increases and changes in nature.

First, a revolution needs to organise, unite, and guide the masses, which necessitates the development of unity symbols and identity logos.

As the masses are poorly educated on average (history knows not a single revolution carried out by a horde of intellectuals) these symbols and logos need to be simple, easily seen from a distance, and clear on the message.

The first thing that the French Revolution had designed was the tricolour cockade.

Bolsheviks had a red flag, MeToo sports pink everything, and BLM has a fist. Socialists lag behind now, because the meaning of the crossed hammer and sickle is understood by fewer and fewer people each year, and while a hammer can still be used to break shop windows, what exactly is one supposed to do with a sickle?

So, put it in your notebook – opportunity No.1. Design identity symbols.

As revolutionary masses have a collective mind, they need iconic images that create mental short-cuts to shared ideas. Any ideological movement or cult can be a client as well, so you don’t have to wait for a revolution to start exploring this avenue.

The first artist who created an iconic revolutionary image, a powerful short-cut to Liberty, was Delacroix, and it was again the French Revolution, but the one in 1830.

Being able to craft an image like that is not easy, but it is a sure way to get the artist’s name into art history books.

Jim Fitzpatrick would forever remain an obscure painter of Irish folklore if not for his Che back in 1968. Who would be interested in Shepard Fairey’s simplistic anti-capitalist sentiments were it not for his Hope icon? 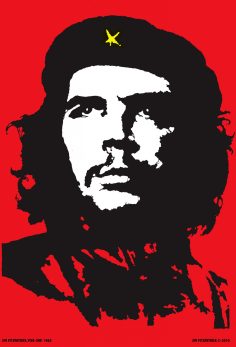 Symbols are hard to nail, but it is not impossible.

Banksy, the fastest artist to add his name to a virtuous agenda, has just set an example with his idea for a semi-toppled monument. 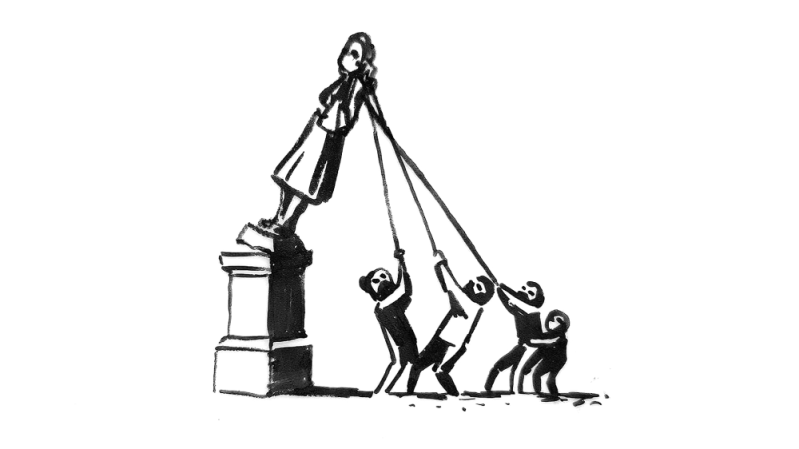 All you have to do is list the essential ideas of the current movement, define universal imagery that fits each of them, link it up with a few words, if necessary, and place an order with T-Shirt printers.

You need to remember who you are going to talk to, of course.

If, for instance, I choose the group of Native American intellectuals, well-versed in modern art, as my target audience, I could come up with a conceptual re-work of Fontana’s cuts:

Of course, I am just as far from the plight of the Lakota tribe as Jim Fitzpatrick was from the Cuban revolution, so yes, this advice is cynical.

Shepard Fairey (the Hope poster boy) who has been made rich by the capitalist system he is creatively criticising, would agree.

It was opportunity No.2. Visualise revolutionary ideas. And don’t forget a call to action.

But the major opportunity is not about exploiting the immediate needs of uneducated masses. It is about capitalising on the underlying motivation of their educated leaders.

All revolutionaries who were serious about their revolutions, be that Princes of the Church in the Dark Middle Ages, the Jacobins, the Politburo, or Mao, wanted the arts to help them in the moulding of the New Man, worthy of living in the societies they planned to build.

They all were quick to realise they couldn’t build their new worlds before they destroyed the old ones, and it represents a severe limitation to artists because when an old world is dismantled, the wallpaper of its art concepts is torn down together with the walls. You can’t be a revolutionary artist if you stick to the old-world methods and styles.

The first step is to develop a new visual language. El Lisistsky made history with his “Prounes”, graphic elements that were meant to become “hieroglyphs” for the new world’s lingo.

Lisitsky was a hands-on man, and when he was developing his “prounes”, he thought of architecture, of all the buildings of the future that would be constructed from these elements converted into 3D blocks of concrete: 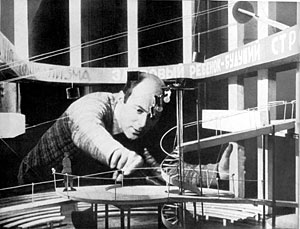 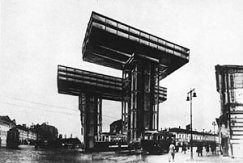 But it was not the architecture that made his famous. In 1920, using the new language of “prounes”, he created a poster that has become iconic. It says “Beat the White [Army] with the Red [Army] Wedge”.

As an exercise, you may try imagining, say, a prison of the future and work backwards toward the “building blocks” that it is made of. Maybe you will stumble upon a new visual language.

Step No.2 is to develop the narrative that will help shape the New Man. Man here stands for all humans, of course.

Again, revolutions of the past can provide some guidance. The French revolution didn’t produce much art, perhaps, because Ingres or David had not developed a new language first. Still, it paved the road for artistic concepts of the Russian Revolution over a century later. 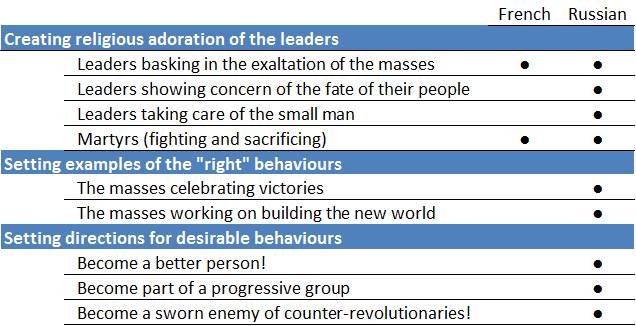 This gallery gives an overview of the most iconic images representing each of the dots – read the captions!

You may not know most of the Russian Revolution paintings (except Rodchenko, I guess) but these are iconic images that until very recently have been shaping the mentality of hundreds of millions of people (and providing very comfortable lifestyles for their creators).

Alas, as of today, the state of socialist or anti-capitalist art is sad. I don’t see a single example worthy of mention, and I’ve been looking really hard. It is a gap that begs to be filled, and it is just the right time to start working on it. There is something in the air today that smells of at least a cultural revolution: the cancel culture, the toppling of statues, the renaming of universities. I don’t care what new name Yale will be getting. I don’t care for the Theodore Roosevelt statue in front of a museum that’s one and a half oceans away from me. Why? Because I’ve had my share of “progressive people of all the countries in the world shall unite” in my first 25 years of life in the USSR, thank you very much. Virtue signalling was not invented by modern social justice warriors. It was invented back in the 1920s and 30s, when Soviet newspapers would dedicate half their space to the collective condemnation of enemies and solidarity letters with friends of socialism, with the headings like “Workers of Steel Plant No.5 all signed Letter Requesting Enemies of State to be Executed like Rabid Dogs”.

I am just curious what will begin appearing on the clean slate of art when all the statues are toppled, dissenters are cancelled, and Charles Dickens books are burned. I am REALLY INTRIGUED. Because sometimes revolutionary art is great, but oftentimes, it produces nothingness, especially when the establishment jumps on the bandwagon of revolution and privatises the steering wheel.

Are recognised celebrity artists capable of doing anything revolutionary?

Let’s have a look at a couple of new works from two big names.

This a sculpture by Gillian Wearing, a 57-year old Young British Artist elected a lifetime member of the Royal Academy of Arts.

Another ex-rebel, Tracy Emin RA, is now using blue paint to express her self-isolation blues that are – no surprise there – connected to her exposed vagina. Again. The world is collapsing around her, families lose their income, people are terrified because they don’t know how they are going to feed their kids in a month, statues are toppled, crime rates are on the rise – but for her, this is all secondary to how sad she feels because she moves from her old house to a new, much bigger one. No, I am not joking, go to White Cube website and see it for yourself, if you want. Well, that may resonate with her current collectors but will they be defining the trends of tomorrow, post-revolution?

Why do I think Wearing and Emin are weak and minor? Their art is so much expected, predictable, and – as Clement Greenberg would say – it’s easy stuff. It doesn’t make you uncomfortable, it doesn’t challenge you. It comes all the way to meet the established taste.

This is why I don’t believe the existing art establishment would be able to produce a truly relevant art, but I have faith in new names.

Just don’t be dead serious about it. Try to be tongue-in-cheek because when future generaitons scoff at revolutionary art of the past, they’d still appreciate “between-the-lines” resistance.

Petrov-Vodkin is an example of how to be a darling of the revolution leaders (the Central Committee of the Communist Party in this case) and subversively criticise it.

When Stalin’s repression machine started picking up speed, Petrov-Vodkin, creator of iconic images for the revolution, made this painting, “1919. Dread”. He said he was referring to the time when the revolutionary Red Army and counter-revolutionary White one were taking and re-taking cities, so he showed a Bolshevik in fear of the White army re-taking his city. The clock on the wall shows 9:34 though, an indication that the artist talks of a different time. Instead of leaving the city, the man is looking out into the night with impending doom written all over himself and his wife. There’s nowhere to run because it is 1934 when you can’t hide from Stalin’s goons.

Imagine the brave new world and express how you feel about it. That’s the key to your future breakthrough.

PS The featured image for this post is Ivan Vladimirov’s 1937 painting “Foreigners in Leningrad”. Note the wary teacher who accompanies the platoon of determined young Pioneers past the fat and monocled capitalist guests to the Soviet Russia whose cars have been precautionarily stopped by the militiaman. No privilege to the privileged!