In totalitarian-minded societies athletes, willing to sacrifice their health for the prestige of their country, are seen as heroes. Like soldiers, dying to expand the empire or to protect its size, sportsmen serve as living proof that the Supreme Ruler or Ideology of the Empire is doing the right thing.

The Ruler’s policies make his country stronger than its adversaries; his care fosters men and women who are mightier, faster, and jump higher than people from enemy states.

When I was a kid, each sports event was a war waged by the soldiers of athletes. Commies vs. Imperialists. I guess it was the same on the other side of the great divide. Did the West feel Russkies were enemies during Olympic games?

I was so relieved when I thought it was over (not least because China made it meaningless).

It is no longer Socialism vs. Capitalism, though.

Once again, Russian television foams with hysterical commentary about the achievements of Russian sportsmen and failures of Team US or Team GB. I want to watch the Olympics, but I can’t, unless my TV is on mute. I want to watch sportsmen from different countries doing mogul skiing. not listen to a commentator chupa-chupsing the assumed grief of a skier from the US who didn’t make it to the top three in the finals.

From what I hear about television in the US, it is not that much different. It keeps savouring the twitterised failures of Sochi: rusty water or two lavatory bowls installed instead of a lavatory bowl and a bidet, and the ring that failed to open, of course. The news of an athlete who got stuck in the elevator make front pages. It must be pretty sour from the US end too, I guess. Again, it is all hearsay, so correct me if I am wrong.

If there’s a sport these Games are missing, it is Mud-Fighting.

I understand why it is happening. Putin wants to project the image of Russia that – in the opinion of most foreigners and a sizeable share of Russians – is not the real Russia, but his vision of the Great Russian Empire. A vision that no one outside of Russia wants to see re-emerging from the heap of the USSR debris. These games are seen by many as an illusionary screen, a mask, constructed and manipulated to hide a great ugliness. Like the one used by Tom Cruise in the Mission Impossible IV to sneak up to a security guard inside the Kremlin.

Who wouldn’t love to poke the illusion and see it collapsing?

A lot of it is true. Sending an unlit torch to a space station does look a perfect illustration to “empty ambition”. Having a former Olympic champion who lately became infamous for twittering a racist Obama photo and voting for the law that banned adoption of Russian children by Americans (and whose children and grandchildren, accidentally, happen to live in the good ole’ U.S.A) carry the torch to its final ceremonial destination was a perfect example of bureaucratic callousness.

So, I understand it.

It doesn’t mean I appreciate it.

A lot of money’s been spent on making a grand sports event when few – if any – other countries could afford spending the equivalent amount of money. Even if a half of it was stolen, the facilities are there. Athletes from across the globe are there.

I know the mud-fighting won’t stop, but I hope it just may subside.

That was politics, but this is an art blog. Artistically, I am disappointed that Sochi is an imported product.

Ninety nine percent of everything in Sochi was planned, done, made, produced by European or US designers. From slopes to the design of uniforms to the opening ceremony. It was financed by Russians, no doubt about that, but I am saddened by the lack of local talent, or rather the lack of trust in local talent.

Previously, when the Soviet Union was young and was organising its own Olympic games, called Spartakiada, Russian artists were at the forefront of things.

A Moscow gallery is exhibiting uniforms that they made according to some of those designs:

Posters, promoting the games were the topmost achievement in collage (author: Gustav Klutsis, Postcards for the All Union Spartakiada Sporting Event, 1928) 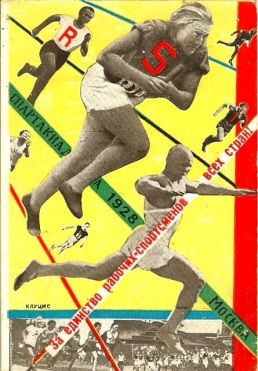 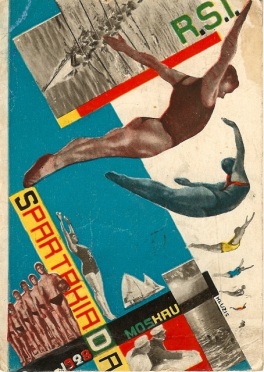 A weaving mill near Moscow was producing sports-themed fabrics – and the design, I have to say was revolutionary:

And of course, like as now, a lot of what was done for the games back then was a smoke screen. With the only exception: people genuinely believed in what the screen was showing, not in what it was hiding.

It is different this time: with all the grandeur of the Sochi games, few people believe in what is painted on the facade of Russia.

It is all right.

Can we have some Olympic fun now?

PS You may want to check Sochi’s unofficial sexist (but sexy) calendar that continues the sports&arts series.