Part I is here, and it shows why the structure of Bacchus and Ariadne is a work of genius. Now I will look into motion and dynamism of this painting.

Two lines tell the story in its entirety in this work.

The first one is the axis that goes straight through Ariadne’s body and the second one is the one that goes through Bacchus and is supported by the arrangement of ankles of two members of his party. They meet high up in the sky, with the constellation that Bacchus turned Ariadne into being the crown of this relationship. 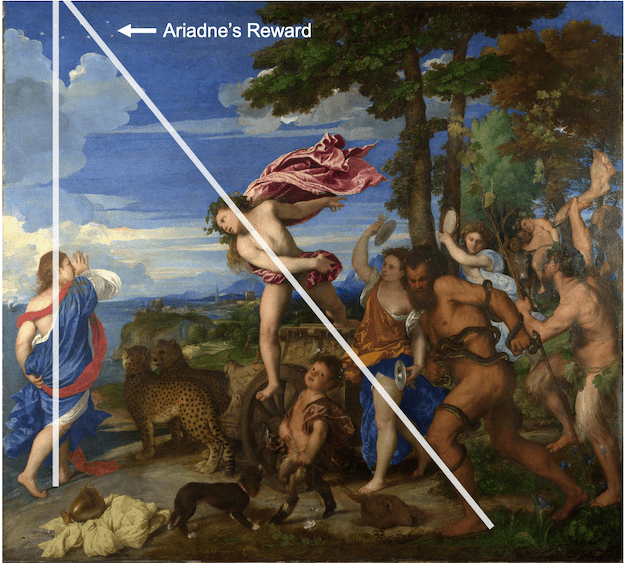 The corkscrew movement of the bodies pushes our attention upwards, to the constellation, even though Ariadne is moving away from the viewer and Bacchus leaps down, not up! 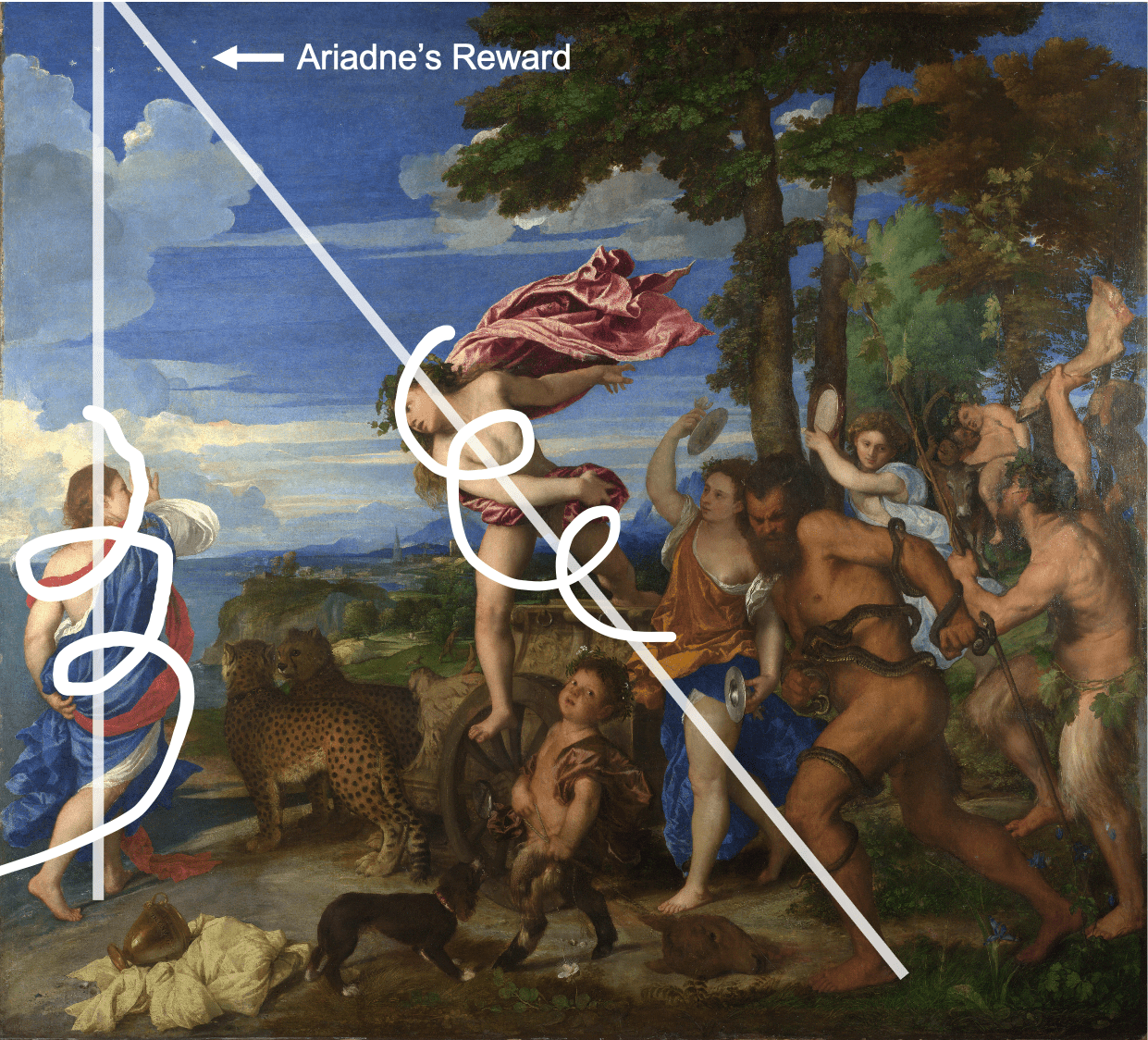 This is why Titian added the red sash to Ariadne figure, it is the tool to lift the viewer’s gaze to the ultimate reward.

Another principal diagonal is the one that the empty vessel of Theseus’s love shoots out through the group of ravers.

The line goes through all the essential counterpoints that you need to see to understand the group’s dynamics and what it is about. This line is like a kebab skewer with all the tasty bits: sex, wine, violence, bending nature to your will, and alcoholism.

If you watched any of the videos from Part I, you remember references to Raphael’s angel and Laocoon sculpture that was discovered ca.15 years before this painting was made. Titian haven’t been to Rome yet, but he might have based at least two of his characters on drawings sent to him by Sebastian del Piombo, who left for Rome in 1516.

This is Raphael’s fresco and the flipped over angel:

And I am sure you know the statue of Laocoon and his sons.

Like any great artist, Titian wasn’t borrowing, he was stealing. Stealing and putting to good use. What he also took, I believe, is the idea of motion pioneered by Paolo Uccello some eighty years before.

Uccello used spears, gradually changing their angle, to create the cinematographic effect of movement in his battle.

Titian did the same – and within a much smaller space of his painting. The vertical line (precisely at the Golden Ratio point) stops this crowd from spilling into the part that is about love at first sight. Yet, occupying just 3/8 of the total space, we the ravers’ group is crushing into the picture as a giant wave. 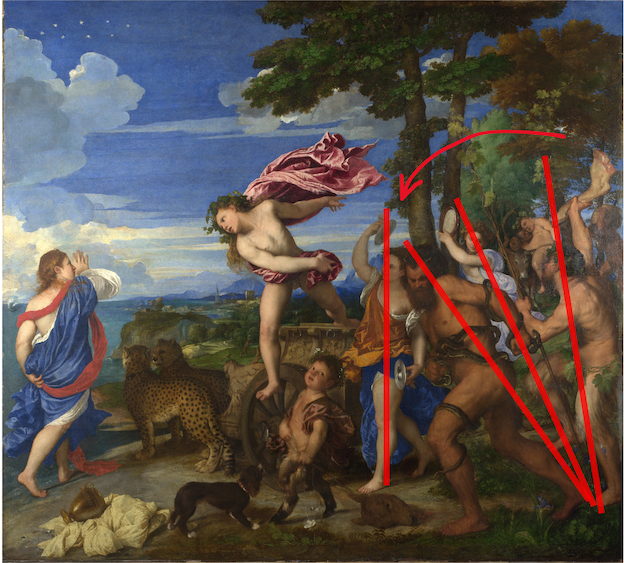 I am not talking about Titian’s use of colour to create rhythm because Smarthistory video discusses it at length, but there’s a colour-related fun fact I want you to know.

In 1517, Titian became the official painter of the Venetian Republic. This title gave Titian many perks and hundred-ducat annual retainer, but the important bit was the position of the head of the salt brokerage at the German trade house. This official post was given to Serenissima’s top artists because they were seen as experts on minerals. And, as you can see from the quantity of the most expensive lazurite blue in this painting, Titian put his access to minerals to good use.

The other interesting fact is about money. Titian took Bacchus and Ariadne to Ferrara himself. It was the last piece in the puzzle of Alfonso’s camerino d’alabastro – and Titian produced three other paintings for it besides retouching Bellini’s work. When Titian first visited Ferrara in 1516, he and the Duke agreed on a hundred ducats for each painting. After Titian installed Bacchus and Ariadne in the palace, the Duke threw a spectacular bash in Titian’s honour. And when the party was over, he paid him only a hundred ducats for all the work. Titian never complained though – in the end, the Duke was a stepping stone to a much more affluent clientele. Were this fact known widely, we might have a new phrasal verb – to titian oneself into – defined as “to elevate onself into an advantageous position by accepting a set-back”.