“I want to have it unseen!” I want my brain to throw it up in a special WC designed to come clean after a heavy dose of a particularly nasty visual experience. That’s what modern public art in Russia does to me 9 times out of 10. Alas, neuroscience has not found the right method to purge memories. Being exposed to bad art is one thing, but hilariously bad art is like a sexually transmitted disease. You can’t help passing it on whenever you get in contact with other people. And this is what I will be doing now. I warned you. You’ll want to unsee it, and help won’t come.

Four horsemen of Apocalypse are common knowledge.What is not in the wiki, is the recently introduced fifth horse. It will hunt down and sexually abuse those people who’ve read “50 Shades of Grey”, and recommended it to others. Or simply discussed it with their friends. This four-meter high monster can be found in Voronezh, a large city in the south of Russia. It looks relatively normal from half a mile away:

But as you get closer, you begin wondering. Why does it bite a rail?! Oh, thank god, you didn’t take the railroad to get there, but what about aunt Natasha, who did?

yes, the area immediately below the belly, the lower parts:

The readers of “50 shades of grey”, beware. It is not even erect.

You try to make sense of it, and as you walk around the horse, you are in for a further blow.

Yes, the horse has two anuses and one has been engaged.

In a few thousand years, when this horse is unearthed by alien archeologists, interesting theories of evolution will disrupt their alien science. The simple explanation that the artist was just a gay man who could not come out in an orthodox country will never pop up. Aliens will board up their UFOs and fly away, because you don’t mess with a planet that used to be home to such species.

What I find amazing is that in a country where gay men have to live in relative secrecy, this sculpture proudly exists by the road that links this city to Moscow.

And now, give me your hypothesis on why this horse was cutely wrapped once: 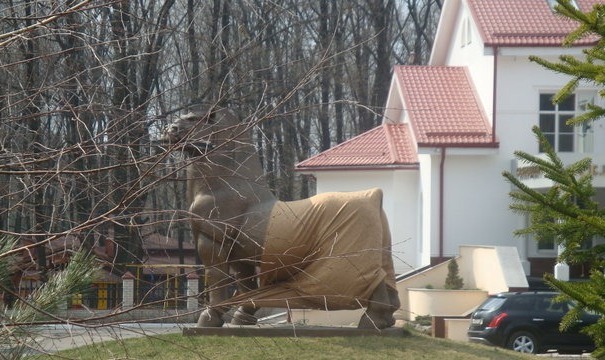 The correct answer will be here tomorrow (with another example of public art)!