While I am in the process of walking you through a Mexico City Sunday market, the Daily Prompt asked me to Write a piece of fiction describing the incident that gave rise to the phrase, “third time’s the charm.” I don’t write fiction, I aint’ no writer. So, I’ll just play back history, as it happened. Let’s start with a chart. 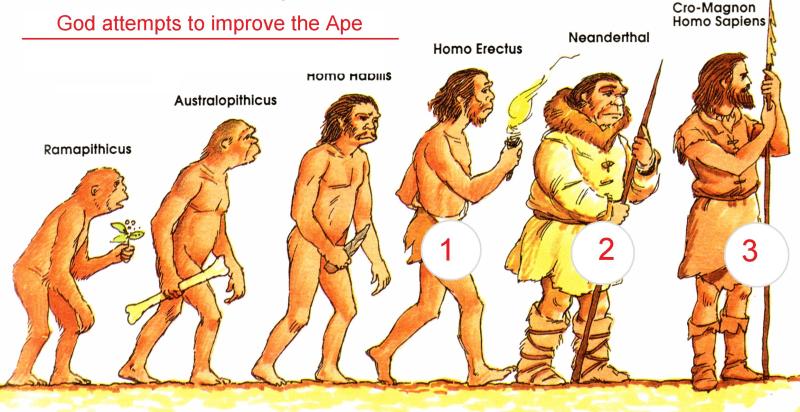 Everyone knows that initially God wanted to improve an ape (three figures on the left), but all He got was the new apemen bleeding to slow death from the many cuts they inflicted on themselves with the stone tools God had made them to play with. And after all his attempts at ape improvement failed, God said, “Thou shall burn in hell, thou stupid idiots!” and gave them fire so that they’d burn themselves.

Strangely, that marked the first step in producing the man as we know him today (Figure marked “1” in the chart above). For the Homo Habilis indeed tried to fire up his own bottom, but instead of burning himself to death, he straightened up. It pains to stoop when your bottom is one big first-dergree burn. And thus, the Homo Erectus was born.

Homo Erectus was God’s first human disappointment, for he thought fire was his only weapon, clothing, and light. There was no glamour, no fashion, and no entertainment. God was bored, for thousands of years were passing by, and Homo Erectuses were still impossibly far from inventing the concept of a toilet, let alone soft toilet paper.

You know, said God one day, I think I shall bash you on the head. A God’s thought is the Universe’s action, but the Universe misread, and instead of bashing on the head, it bashed Homo Erectuses in the head, and made it bigger.

Thus, the Neanderthal was born (Figure marked “2” in the chart above). Neanderthal knew fire and how to undress a mammoth. Fur coats promised progress. There had been only one problem with this second attempt, which only recently was discovered, when scientists reconstructed the Neanderthal man:

And God said, “Are thou crazy? I want to see the Texas Ranger movies in the future but there’d be no point in making them if all people look like Chuck Norris!”

So, the Universe wispered, “Let’s leave just one Chuck Norris, this great product of millions of  years of your efforts at evolution. For the movies. Now is the time to admit the evolution didn’t work out.”

And the Universe wispered, “You are God. People are impossible to change. Make them anew, from scratch”.

But God said, “No. I’ve tried to grow a man out of genetically suitable biological material”. I spent millions of years turning bacteria from the sea in something as impressive as a Neanderthal. But they want to stay Neanderthal, and won’t ever evolve into a man capable of producing a Hollywood blockbuster. How do I know it will work this time?”

And one of the more obscure black holes chuckled back, “Third time’s the charm”

And this is how the Homo Sapience was born (Figure marked “3” in the chart above). A second after the phrase itself.

Strangely, many Homo Sapiences want to live like a Neanderthal. And many do!

PS Will be back with Mexico tomorrow.