Most of the last century went under the sign of using ready-made elements in traditional media (like, Cubists including real newspapers into their paintings) or on their own (like Duchamp’s Urinal). The idea is that when you take an ordinary object and move it from its  mundane surroundings into artistic space, it gets imbued with new meaning.

Sometimes this meaning is interesting, sometimes it is not, and sometimes it is so deeply hidden in the mind of the artist that you need two shrinks working in shifts to extract it (in the latter case all you actually need to sell it is just one Charles Saatchi).

I will not be taking you through the history of ready-made art today, but I will share three objects that I think are worth thinking about.

Richard Wentsworth did a stint with Henry Moore as his assistant, got brilliant education and is known as a very clever man with a great sense of humour.

He made his career, combining and juxtaposing materials and objects we see daily in our life in a way that gives these objects new qualities. For instance, he once suspended books from a ceiling, making them fly. A nice metaphor for knowledge, reading, and the role of literature in our life.

This art object is titled “Time and Place”.

I showed this picture to a lot of people, and asked them for associations. Each viewer was feeding back A LOT of things, but each time those things were different and highly individual. “Time and Place” is a perfect example of contemporary art that does not have an explicit idea embedded in it, but triggers mental processes that a message which is purely your own.

We step next to Wentsworth’s “Siege” which has a double meaning. First, it is a siege, like that of a castle; second, it is an ordinary French word, meaning “stool” or “chair”.

What is it? Some people of the more expressive and less formal persuasion even ask me “What the F**k is it?”, when I show them this photo. It is, well, two chairs with one straddling the other. The one on top has the balls. The one that’s straddled has a hole. The balls idea comes from “bola”. It was a device consisting of a rope and two balls that was used by cowboys to fetter, or hobble animals. The process is clear from this picture:

Most viewers agree the results work of art is somewhat indecent. A chair straddled a chair hobbling it with its balls, basically saying, “I’ve got the balls, that’s why I am on top”.

This was the artist’s response to the feminist ideas in the 1980s.

Many feminists would think it is a rude joke that is also not funny. Well, it is not rude, and it is funny. It is anti-feminist only on the surface. The funny thing is that is says, we, anti-feminist have only one argument left. We’ve got the balls, so we should be on top. We know we are losing this debate, and we know we can’t use this argument any more, so we’ll just show it.

It is the middle finger shown by the losing side to the winner. The fact that the losing side is perfectly aware of being left with the dumbest sort of argument makes it funny. 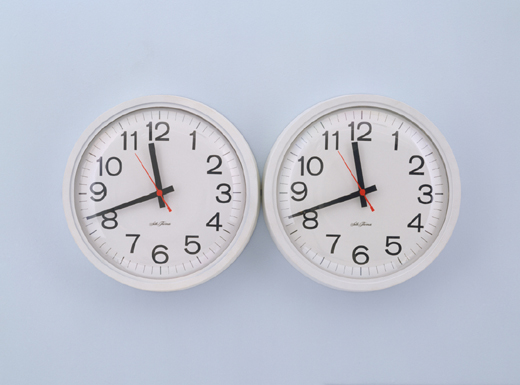 “Perfect Lovers” by Félix González-Torres (of whom Wiki says, “an American, Cuban-born, gay visual artist”. Why his sexual orientation should be right there in the first line about him, is beyond me. He was just a very good artist.) This is the artist who was chosen to represent the US at the Venice Biennale in 2007, ten years after his death.

When you first see it, you think, well, that’s too simple. Two clocks mounted on the wall. They show the same time. Perfect Lovers. He could have put a pair of any identical objects instead of the clocks and nothing would change. A simple metaphor. Not worth a second look.

And here is the trick. For it is worth a second look. The longer the cheap clocks stay side by side, the more obvious their differences become to the viewer. These are cheap clocks, they get out of sync with each other pretty fast. And the longer they are “together”, the more they get out of sync. That’s life. And, perhaps, one of the few moments when the romantic idea is reflected on by an artist in a way that is not sickeningly sweet.

Why this intallation is called Perfect Lovers if the clocks get out of sync with each other? How could these lovers stay perfect when the lag becomes obvious?

What needs to be changed in this installation for it to represent imperfect lovers?

I’d love to hear what you think. Please remember that these clocks can be a symbol of not only thoughts, actions, emotions, but stand for biological clock as well.

Another CLEVER example of ready-made art, one of my super favourites, is here. It is a naked Venus confronted by a pile of second-hand clothes. Fashion bloggers/lovers simply MUST read it.