LIFE IN ART HISTORY. When artists want to show life, they usually opt for cheerful and joyful images of it. In those rare cases when they don’t or can afford not to care about selling their work to a wealthy individual, they introduce someone who is very old or just show death in their picture. The fact that people of different ages look at life differently was common knowledge even at the time when the shrink profession was not even in the making.

The theme of different ages, normally split in three stages, has been present in art in the last 500 years, and each century and art school looked into this well of joy and sorrow with varying success.

Here are the milestones.

This painting is also called Reading a Song. Whatever it is they are reading the message is clear: the boy has to learn, the middle-aged man knows what and why is important, and the old man looks at us as if saying, “What a waste of time that was! Out of everything I’ve learnt, I was in need of less than one percent!”

Around the same time, another artist, from Germany, got concerned about the same topic, specifically about the way it related to women.

Three Ages of Woman and Death 1510 by Hans Baldung,

The figures are somewhat shifted to the left, like furniture in a room in which one wall is being painted, implying that this is only a part of a larger work, so we won’t be talking about the overall layout here. But look at the details, and think about

OK, if you don’t feel like thinking right now, let me take your hand and walk you through.

The small girl plays in the garden, and there’s a fresh apple on the grass (referring to the sin that made us mortal but also the freshness of youth – not forgetting of course that as soon as a fresh apple falls off its mother tree, it starts dying). The girl doesn’t see the Death figure.

The young woman looks at her reflection in the mirror. She’s most concerned about her looks, so she notices neither the small girl, not the older woman or Death.

The older woman can see Death, and tries to take its hand away from the unaware young woman, but this is – obviously – a futile attempt.

Some thirty years later the same artist produced another version of this work, strangely enough called The Ages of Man and Death.

This painting is much more expressive, but in a different way. Again we have to look into the details. The child is asleep and unaware of the Salvation (represented by a crucifixion in the skies) or Hell (that’s the action shown in the background). The child is, in a way, innocent, though already mortal. Its sleep is a metaphor for the eventual death, just like the one that used an apple 30 years before that. 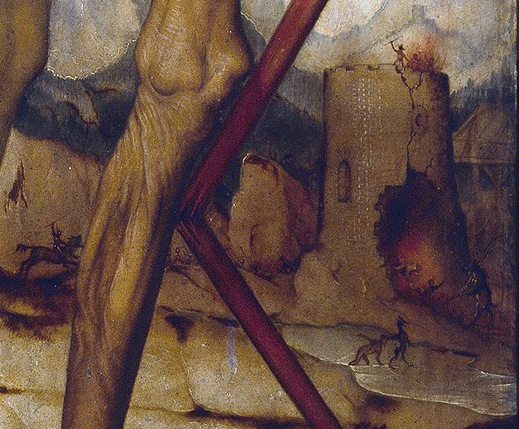 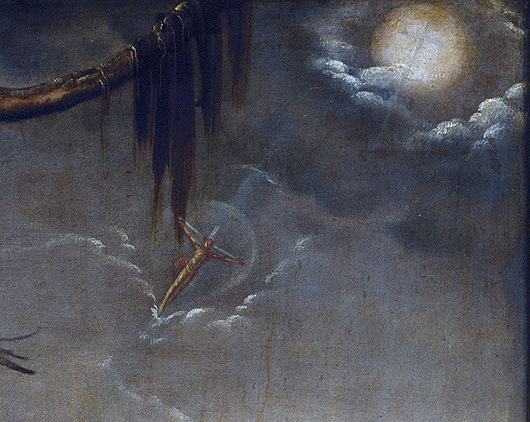 Death leads the old woman by the arm to the right (Yes, ladies, Hell is what Hans envisioned for you. He left you with some hope in the sky though, but you really have to strain your eyes to see it).

What I find thrilling about the painting is this fragment:

The old woman doesn’t weep as much, while leaving her younger self to “keep calm and carry on”. There’s a tear in the corner of her eye, but those eyes have wept out all the tears long before she accepted her fate. If the young woman is in grief about the frightening inevitability of death, the old woman (who is about to die) feels not grief, but sorrow for those who’d still live. Note that she can remember the details of her own youth – and that’s why she sees her younger self.

Psychologically, this is one of the most profound paintings of the German Renaissance, which hasn’t lost its relevance in almost 500 years.

Now, let’s jump 400 years to the year when the next big thing happened to the three-age-concept.

Read it right to left. There are a lot of symbols representing a lot of ideas, but you know what? I don’t think that a guy who committed a few unsuccessful suicides and had an obsession of screwing virgins can give me insights about the meaning of life. He was a brilliant painter, very talented, with interesting insights about life in Europe and Tahiti that he showed in his paintings, but life and death issues? From him? Seriously?

I am not saying this is not a great painting. The way the palette changes from right to left, the calculated turn of the head of each woman, the rhythm with which the viewer’s eye travels through it because the artist calculated the branches, the stripes of changing colour – it is a brilliant painting.

This painting influenced a lot of artists and a lot of thinking. It sort of showed the art world that visual artists can use new styles and techniques to keep talking and even say something new about life and death.

The more symbolic representation of the theme did not have to wait long. In less than 10 years, we’ve got The Three Ages of Woman by Gustav Klimt (1905).

Why I don’t like this painting. This is not true that at the ripe old age, women always get separated from happiness, are disconnected from life and its joys. This is a male chauvinist point of view. Old age is not equal to desolate despair. It often is, but not always. The genius of Klimt makes such an outcome convincingly inevitable. So, it is a great painting of a point of view I don’t want to support.

A painting calculated mathematically to create the impression that there’s some revelation coded in it. Brilliant marketing: people love talking about life and death, give them something new to talk about, introduce external influences (woman of varying age), materials (mid-age made of stone, old age made of wood, etc.), wrap it all up in a way that the eye loves to explore it – bang!

Again, a brilliant painting, in terms of skill, but without ideas that wouldn’t be expressed and discussed before. If Dali was best at anything, it was wrapping it all up in exciting gift paper.

If you know of an interesting work on the three-age topic of a contemporary artist, let me know!

If you want to say you don’t agree with me, say it! I’d love to hear what you think.

Thank you, Daily Prompt for inspiration!