The answer to Art Quiz #2 is “Napoleon of France as Mars the Peacemaker”. The statue stands in the courtyard of Pinacoteca di Brera which the Emperor of France established as a public museum, promising to send to it any important works captured by his army in other countries. 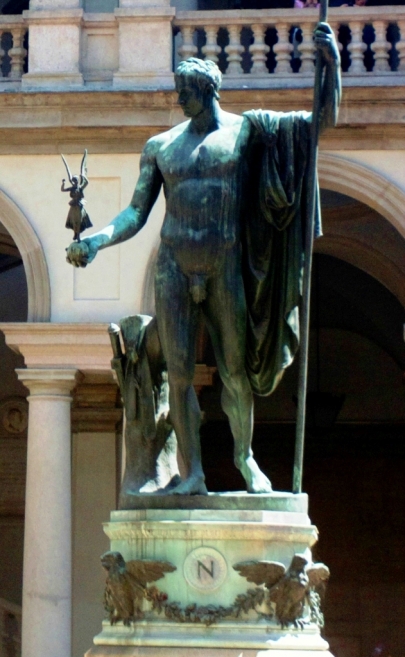 Artists have always been flattering their royal and dictatorial models, often slightly over the top but not in a way to make the model ridiculous. This work by Antonio Canova flatters Napoleon beyond reasonable adulation, save, perhaps for the size of his figleafed parts: Canova was the top classicism sculptor of his time, so he had to stick to the Ancient Greek standard of a 12-year-old boy’s willie.

Canova was so good at marbling flesh, so classic, and so sweet that it was primarily the French and Russians (as the two most sentimental nations of Europe) who fell for him. The largest collections of his works can be found in the Louvre in Paris and the Hermitage in St.Petersburg.

This is Canova’s Psyche Revived by Cupid’s Kiss, which is surprisingly more exciting if you look from behind. A Latin literature connoisseur may appreciate the fact that the book title from which the mythical story originated was “The Golden Ass“.

Surprisingly, the same – but marble – Napoleon by Canova can be found in London, at the house of Duke of Wellington, who is most famous for his Waterloo victory over the statue’s prototype. If you are in London, you may be lured to this museum by the fact it has a pretty good collection of paintings, with an amazing Correggio among other works.

Back to Pinacoteca di Brera.

Its buliding looks a bit like a cross between a medieval palazzo and prison on the outside, but inside it is (!) full of excellent works of art and (!!) empty of people.

You can sit there in the middle of a room on a bench and enjoy the works of art on the wall for half an hour and no one will cross your line of sight. All the tourists are worshipping the golden calf of consumerism shopping.

There’s an artist there I want you to remember, Giovanni Battista Cima.

He lived parallel to Leonardo (albeit about 10 years less), and anyone who’s got anything to do with landscape must know him. Cima was a pioneering user of atmospheric perspective and light/shade distribution laws governing our perceptions of objects depending on their distance from the viewer.

Look at this fragment of his Baptism of Christ (1492):

Now, there are several major works by Cima in Brera, but it is the details of his works I love most.

This is a group of saints. It doesn’t matter, actually, what are their names, except for Martyr St Peter with an axe planted in this skull. According to legend, after the top of his head was severed off, he kept praying.

The important bit is at the bottom, the angel-boy who tunes up his instrument. This angel makes the somber atmosphere of the painting so much less frightening. Look at the angel’s face and the attention he’s paying to the sound he extracts from his violin. He looks at you, but his ear and mind are occupied by matching the sound the violin produces to the ideal concept of that sound preserved in his mind. There’s a metaphor behind the boy as well. These saints were showing people how a proper Catholic should live. They led by example. You, when looking at them, have to tune up your life to the examples they provide. 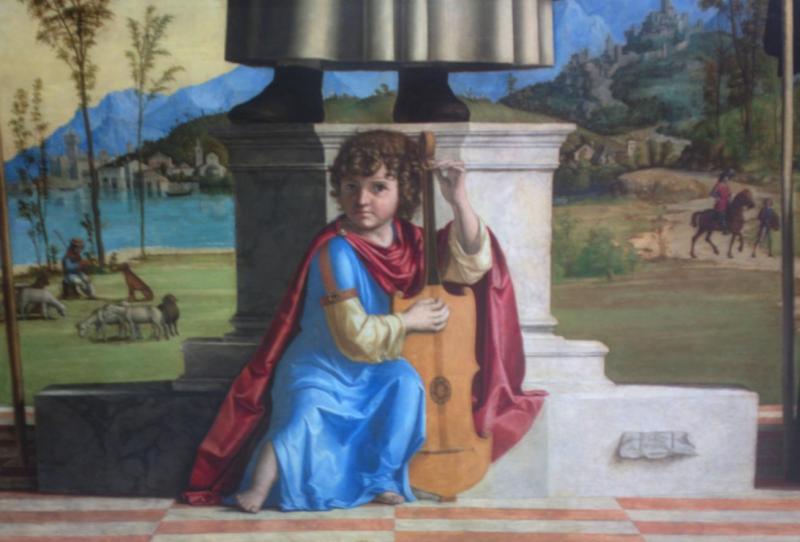 And – last but not least – listen to the landscape behind the boy. This painting alone is worth a trip to Brera, but there are more, so many more!