An apple a day doesn’t make you Galileo Galilei, but keeps doctors at bay if you throw apples at them with sufficient force and precision. When normal people see an apple-tree loaded with apples they think of apples. It would be a sign of deep emotional disturbance if one thought of pears.

Alas, if you are an art-lover (some say, “a twisted art geek”), you think of an artwork that has apples in it. Not normal. Some doctors believe it’s worse than thinking pears.

When I saw the apple tree above, I remembered the most ironic, comic, and humorous artist of the German renaissance, Lucas Cranach the Elder.

Look at this piece of comedy dated back to 1526.

The country bumpkin of Adam scratches his head in bewilderment. Eve looks at him with a sly smile, fully aware that the moment Adam bites on the apple, there’s gonna be some revelation, which we call today “erection” in pill ads and “arousal” in those novels that can be found on the top shelf at any airport newsstand.

Look at apples in this painting.

Now, let’s look at Adam and Eve a bit closer.

Do you see Lucas Cranach laughing while painting this? 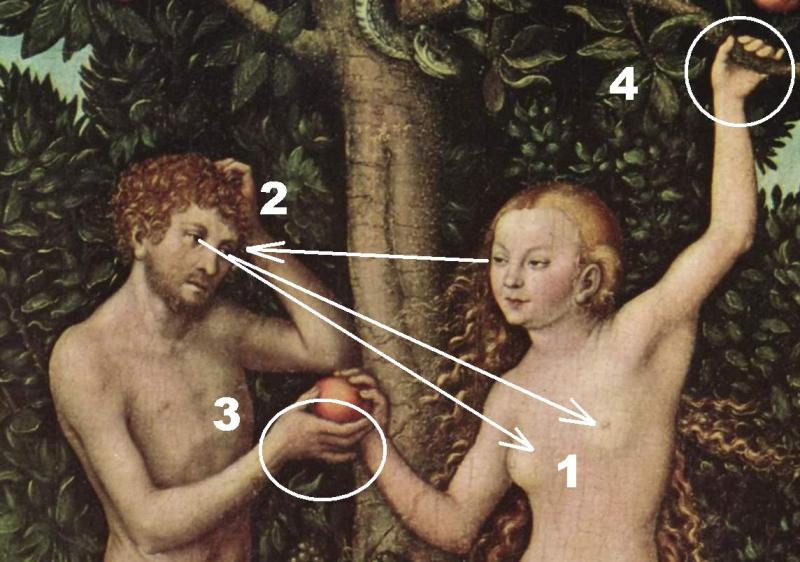 Adam is taking the apple, but he looks at Eve’s breasts, with a puzzled look that says, “Why the heck did she get those and I didn’t?!”

Men generally avoid looking women straight in the eye when confronted with a difficult question. A typical dialogue could be along the lines of “Darling, isn’t it time to decide when we announce our engagement? — Look what a funny green snake is up there!”

Eve, as a smart woman, looks Adam right into his uncertain eyes. Unlike men, women are known NOT to avert their gaze even when the gaze would better be averted. Eve is mentally prepared to burst out with “Stop looking at my breasts!” the moment Adam bites the apple, making Adam forever guilty of looking at the breasts and not the eyes. My fellow men, it all began there and then, so when you are confronted by the angry question, “Are you looking at my breasts?!” next time, your best defense is not “I didn’t look at your breasts!”, it is the line, “It was you who gave me that apple, [insert girl’s name here] !” You can add, “metaphorically speaking” for clarity and protection.

Look at how Adam takes the apple. You don’t take an apple like that! You take a breast like that if it is apple-sized. And the breast is offered for taking. One bite, and all Adam would think of would be breast-taking. Breathtaking experience, for which Eve is getting herself ready.

Yes, she understands there’s going to be some grappling, hugging, and the general turmoil associated with love-making. So, she decides to grab a branch, for stability.

But just look at the way her hand takes the branch. I am sorry, it is not about grasping a thick branch of the Wisdom Tree for equilibrium purposes. It is what her other hand would be doing after Adam bites the apple.

Do you see now what a clever comedy painter was that friend of Luther?

P.S. The most frequent mistake of a beginning artist is to paint apples all the same and perfectly round. It kills an apple tree, because it doesn’t grow perfect apples. All apples are individual, many have a flaw of character, some are so ugly you are reminded of a chemical factory a few miles away, which management has just issued a green-compliance report. Unless those flaws are shown, there’s no life in the painted apple tree.

I must thank the Daily post, for inspiration, as well as the old apple tree at my parents’ garden.

Is it your first time here? To sample stuff the blog has on offer, click on ABOUT at the top. You’ll find links to some of my best or typical posts there. There’s an Art & Fun shelf there if you feel like in need of a laugh. And don’t forget you can sign up for my new posts: there’s a “Follow this blog” form on the right.