‘Hello, Luke! I feel the power is strong in you, fly boy.’

Luke just landed on a cloud. He shaped a white fluffy chair out of it with a few Jedi-like gestures before replying.

‘You know, Peter,’ said St.Luke, making himself comfortable in his cloudy chaise longue, ‘this joke begins getting on my nerves. I’ve arranged for five more Star Wars movies to be filmed, but you stick to the 1977 line. That’s not fair’.

‘Life’s not fair,’ said St.Peter with a wink. ‘That’s what I keep telling people who knock on the Gate. Speaking of which, I need to ask you something, as, you know, the guardian angel of artists.’

‘It is the patron saint, Peter, not a guardian angel. Any more jokes you’d like to share now? ‘Cause I am truly busy, my drawing class begins in a minute, and I had to smuggle a truckload of Coke to bribe the demons to have Michelangelo out of Hell for 30 minutes to head it. I can’t have it wasted.’

‘Luke, do you remember why I sent Michelangelo down to Hell in the first place?’

‘He killed someone, didn’t he?’

‘Oh, no. It was Michelangelo Merisi, or Caravaggio, who did. Your Michelangelo almost killed a few sensitive ladies with his foul smell (and we made sure the demon that convinced him bathing was bad for health never left Hell or Mongolian steppes again), but we don’t send souls to Hell for trying. It was Pride. He wanted to create art that would live forever, banish death and make him equal to God. We’ve been sending ambitious people down since the Tower of Babel. Man ain’t no God, Luke. So, can you put away your painterly ambitions for a moment? It’s important.’

St.Luke watched St.Peter with the hopelessness of a shored-up whale that wanted to climb out to evolve but helpful people were pushing it back to the ocean again.

‘Peter,’ he said, ‘what art advice do you want from me then? Shoot it out.’

‘Oh, thank you, Luke. There’s that case of Malevich on my doorstep right now. He’s been in Purgatory since 1935 and now is the time…’

‘I thought Malevich was a Jew and we stopped handling Jews two thousand years ago, didn’t we?’ murmured St.Luke.

‘Who the heck is the patron saint of artists?’ Peter sounded sincerely surprised, ‘Malevich was Polish. Catholic Polish.’

‘So I need to know if Malevich qualifies as a creator of Great Art, to decide what to do with him’.

‘Yes, he does, even if it sends him to Hell. He did the Black Square, and that is a great piece of great art alone’. 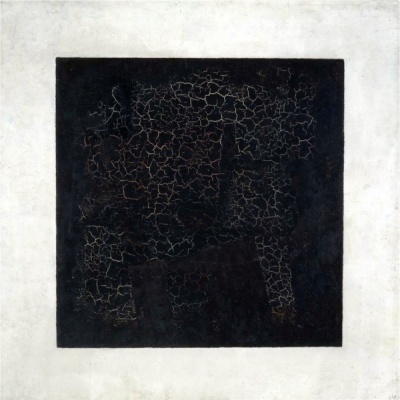 ‘Peter, you couldn’t. It is not a square actually. None of the sides of the black box is parallel to the opposite side or to any of the picture sides. There’s no black paint either. It is a mixture of colours that produces something your brain interprets as black.’

‘Why is it called the Black Square then?!’

‘Because people see it as a black square even though it is neither square nor black!’, said St.Luke in desperation.

‘Yeah, I got that far, but I still miss the point of this, hmm, mystification’.

‘Malevich created a dynamic and living symbol out of something that looks as a solid, fixed, unmoving and unmovable object’.

‘Why would he do it, if all you can see is just a black square?’

‘Oh, but here is the trick. People with poor imagination see a black square, but connoisseurs thinking outside the box can see a multi-coloured cube in this painting.’

‘Luke, your connoisseurs thinking outside the box are usually the ones whose thinking inside the box is best described by a diagnosis that makes it impossible for them to get a driving license’.

‘Peter, do you remember the times when veils were all the rage among women?’

‘Sure I do – I am still getting a few fresh souls a week who keep blinking and murmuring, “oh, now I know what’s behind the veil”.

‘Well, think of this black square as a veil. People who are curious enough to see behind it, would see white behind black, life behind death, volume behind flatness. They would be the ones to whom universe secrets are revealed’

‘Luke, I tell you what. I don’t think this is great art, I think this is – as you said – a trick. As he’s not a great artist, the Tower of Babel precedent doesn’t work. Magicians are welcome here as long as they stick to tricks and stay away from real magic. So, he gets transferred to Paradise this very moment!’

‘Oh,’ said St.Luke, ‘Thank you! I think this is the right thing to do, even though I strongly disagree with you on his greatness.’

‘Luke, you can have Malevich now as your teacher, class leader, or course director. No more sinful Coke smuggling! I’ll be sending Michelangelo back then, I assume?’

There was that awkward moment of silence when the clapping of hands is expected but no one cheers up.

St.Luke was whipping up his cloud chair into a growing Rococo sofa.

The Rococo sofa collapsed back into a chair of reasonable proportion.

‘And, Peter, next time a conceptual contemporary artist turns up, just let them in.’

‘So, no Babel Tower discussions for the next 50 years, flyboy?’, said St.Peter with mock disappointment.

‘No, and there’s a new Star Wars movie in the making. I hope you get to pick up another line!’

It’s the Weekly Writing Prompt that asked for a dialogue bringing to life the blog’s topic that made me write it. There are about 10 other points I could make to support Malevich greatness, but I decided to save them for later. Luke didn’t want to miss his lesson.