This is a post primarily for those who laboured through Part I and Part II, and want to learn a bit more about the painting we spent so much time studying. It may, nonetheless, be of interest to those who are curious about the economics of superstition. This is also my answer to the Daily Prompt about googling stuff. This is the kind of stuff I googled to cheer up my readers a bit, for I know that getting through the previous post in which Repin’s painting of barge haulers was dissected and analysed like a patient in Dr House series must have been a nightmare. And – after all the pain – I am sure no one has spotted a woman in this painting. Now, wait a bit, I will show her.

Initially, Repin wanted to show rich public leisurely strolling along the river bank and barge haulers cutting through the well-dressed crowd, but a friend of his talked him out of it. The killing argument was that if such a conflict between the rich and the poor was thrown in the face of the public, it would be not highlighted but devalued. Instead of putting viewers on the path of individual reflection on the plight of the Haulers, they would be forced into comparing clothes’ quality, as if they didn’t know the difference between expensive and cheap fabrics.

Were Repin to follow his initial instinct, he could come up with a painting like Riverside, by Telemaco Signorini in 1864 (five years before Repin first encountered barge-haulers on the Neva River near St.Petersburg).

A boring piece that doesn’t go beyond a simple statement: some people have to work while others are taking their kids and dogs for a breath of fresh air. Nicely done, though. The dog that pays attention to the sad procession while his owners look the other way is especially cute. I also like the guy to looks back at the viewer, engaging us to become active participants in this scene. It is a small work, an illustration of the day-to-day life to which the group of Italian artists that had Signorini among its members fully dedicated itself. 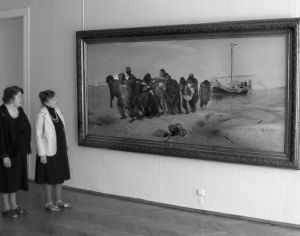 Repin’s canvas is a large painting, that can be studied for hours by artists interested in rendering light, textures, composition, perspective, and, above all, emotions.

To sketch the lead hauler Repin and his friends were chasing the team on the river in a small boat.

The painting was completed and exhibited in 1871, but then Repin took it off, and went to the Eastern part of Russia again, to repaint it. It took him two more years to finalise it.

Some details in the painting tell an interesting economic story. 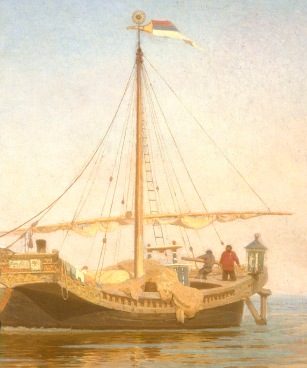 These barges were built for one-way trip (hard to believe, right?)

Upon arrival at destination, the goods would be sold, the barge disassembled into wood logs and sold as well.

She was not a durable kind of ship, built fast and for a one-off use, but the owner didn’t want it to sink, of course, before she makes it to the intended destination.

It was believed that such barges in some mystical way acquire better sailing qualities if they are covered by elaborate carving. There were carving masters in each trading city who would be hired to cover the sides with patterns. Repin’s painting documented this superstitious effort:

When these one-off barges were replaced by steamships, the wood carving industry collapsed, but its skilled masters soon found a new market niche. They went into real estate and started protecting houses, offering  to carve window and door casings.

This is how superstition, mysticism, wit, and the ever-present need to exchange labour for money produced beauty: 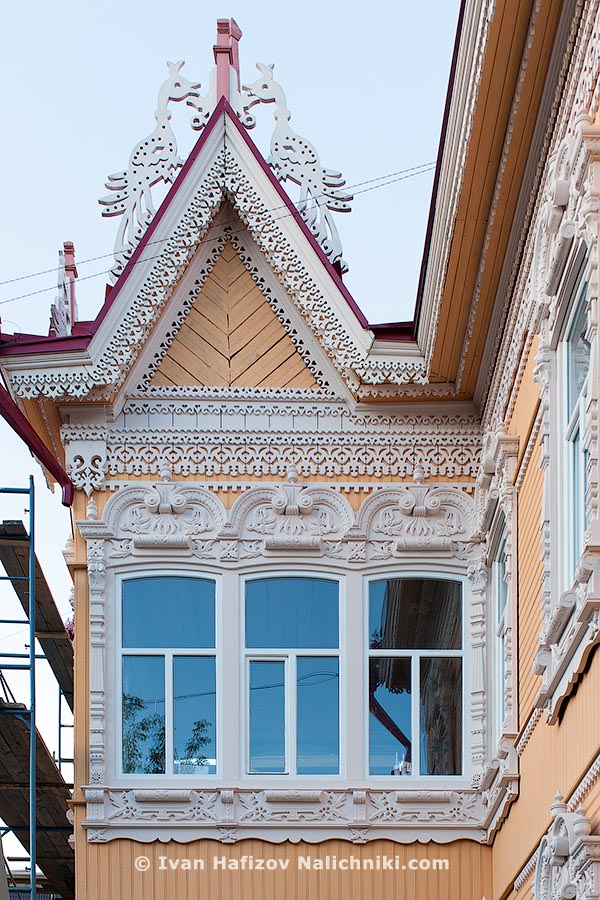 You can find a ton of amazing photographs at the photographer’s blog (I believe he is one of the few enthusiasts who travel Russia hunting for these images).

I am sure you’ve seen a woman in the photograph above.

If you look at the detail of Repin’s painting above you’ll see a woman’s head in a red scarf over the railing. She helps the boat owner (the guy in a red shirt) with cooking, and washing. She is always overlooked.

How many haulers are there in the painting?

It is also strange that most people in Russia or elsewhere believe there are 11 haulers in this painting. Well, there are 11 people who actually haul the barge, but there’s one other guy who is also the team’s member. He is steering the barge. So, the team is 12.

Did others paint men of this profession?

Repin was not the first or the only one artist to develop an interest in people who move vessels upstream. This is a gallery of works on this theme, and you may roam through it thinking of what these artists (including Monet and Daumier) did differently and what fascinated them in this profession.

Claude Monet. Towing of a Boat at Honfleur

The only monument to a barge hauler in the world, the town of Rybinsk, Russia

As any over-reproduced artwork, Repin’s painting suffered the fate of funny alterations:

I am sure a Simpsons version also exists.

My favourite is the cross between two Repin’s paintings. The Barge Haulers and The Unexpected Arrival that I covered in this post on Painting Surprise:

The painting was even reproduced on a Volga car, putting the Barge Haulers literally on a Volga:

And my last, but not least favourite picture is that of a snow sculpture from China: 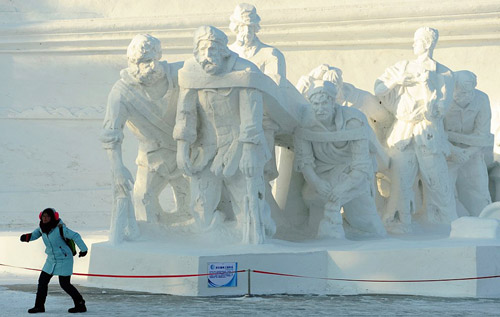 I mean, a snow monument? To melt after a few days? If I ever need to visualise the word POINTLESS, I’d use this photograph.

See you soon over Part III in the series on Russian intellectuals.