Russian fairy tales… From the few paintings in Part I of this series you could glimpse their cruel qualities. Russian artists instinctively felt the need to produce something more than just an illustration to those stories. They wanted to highlight the conflict, the moment of truth, the climax of the story, but not in a way that would simply illustrate the text. They wanted viewers to re-live the climax just looking at the painting, not reading or listening to the story.

The painting that closed Part I was based on one of the Labours of Ilya Murometz, the Russian equivalent of Hercules.

The tale is seemingly simple. Ilya the Knight stumbled upon a magical road sign telling him in large friendly letters that anyone pressing further was to lose his life and his horse. It also mentioned in fine print at the bottom that turning left would make the traveller rich, while turning right would change the traveller matrimonial status to “happily married”.

What direction would you choose?

No, this is not a trick. Money, Family, or an Adventure ending in Death?

It might be an easy choice but not for a Russian knight. Anyone can have money or families. Those alone do not provide meaning to life. Adventures (especially the ones ending in death) do.

So, Ilya – having spent some time deliberating his choices – decided to go straight ahead.

Soon thereafter, he was attacked by highwaymen (and because there was no highway, it was not the civilized approach with the “Purse vs Life” demands but a straightforward run to take the life first, and then take the purse). Again, the idiocy of fairy tale villains showed itself in all its glory. Imagine someone built like Arnold Schwarzenegger, in full combat gear, loaded with guns and rocket launchers as a Christmas tree with toys, driving an armoured vehicle. That would be today’s equivalent of a knight from the “once-upon-a-time” period. Now that someone is driving through, say, Southwark, London. Would it be wise for a bunch of street thugs to launch at him?

Ilya the Knight not so much defeated as humbled the villains. They offered him their clothes, their women and their riches. He didn’t take their garb (wrong sizes), declined their women (pumping iron and potency are not exactly best friends), and scoffed at their money. Any kind villager he met was happy to provide free bed, breakfast, lunch and dinner (and it was his job to insure that there were no unkind villagers left in the land). Having laden the fully repentant criminals with this multi-layered humiliation, Ilya galloped away to his next feat.

It is easy to define what must be shown in a painting based on this story. The tale’s climax is not the fight. It is the moment when Ilya had to make his mind in front of the prophetic stone.

How to show it to involve the viewer into this fateful moment?

The first version of this painting (Vasnetzov completed it a year before the final one) was showing the knight facing the stone:

It must cost a lot of money today, but it is not a great piece. It is a simple illustration, which does not involve the viewer, who watches the scene as a spectator in a theatre. Sitting in the first row, the viewer can appreciate the sombre expression in the face of the knight who wishes he had learned to read in Old Russian.

Vasnetzov changed only a few things in his painting and made it the Russian Icon of Dilemma. Compare the two versions side by side:

So, the artist involved us in making the life and death decision and highlighted and emphasised the inevitable aspect of death.

But why should we consider going forward at all?

Why does the eye starts roaming – quite involuntarily – in the space behind the stone?

The simple trick of maxing up contrast while killing brightness can help answer this.

I am sure you’ve seen it without my aid, but you might have noticed I am trigger-happy to draw arrows and stuff on great paintings. The eye is drawn to light areas. Using the lighter spots in the painting, Vasnetzov creates a path that takes us on a journey beyond the stone. The artist does not push us but subtly motivates us to explore the space behind the stone. 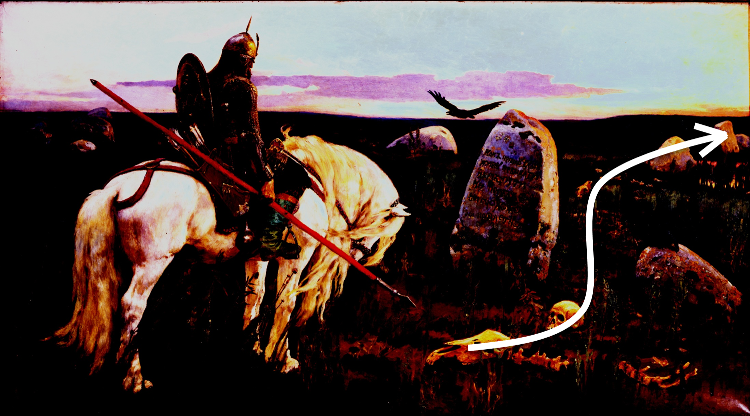 You may say children are better off without exposure to a conflict that even adults may not be prepared to resolve in a positive way, but there are two sides to any story. The side-effect of this painting is that children learn to disregard safety notices. In Russia, “Do not enter” is an informal invitation to come (“Authorised personnel only” is seen as too formal and is rarely used).

Yet, there are benefits in them, cruel adult conflicts of Russian fairy tale paintings.

Early development comes naturally. Having survived the tale of Ivanushka (diminutive of Ivan), who burned an old woman he mistook for a witch, or the story of Ivan the Fool (grown-up Ivanushka) having his crazy wishes fulfilled by a talking pike, Russian babies giggle at Grimm Brothers and their dark tragedies. When Russian babies are read the Grimm Brothers story of 7 goatlings who’d been eaten by a cunning wolf while their mom was away, their eyes betray the already adult question, “Where the heck was that goat of a father?!”

These are a few excerpts from a Russian forum for babies who can’t yet speak, but can pose questions that are far from being “infant”.

Amplified adaptability to the most severe circumstances and conditions comes next. Having read the tale of a frog who lived in a swamp but has grown to become a princess, no one is afraid to play in the mud during their formative years.

Certainty (not just a belief) that everything’s gonna be OK at the end, and if it is not OK, it’s not the end is complimented by confidence that if everything’s OK, it is a beginning of something dreadful.

“Darling, I knew you came to me from a kind fairy tale, but I’ve just realised why.”
“Yes, why?”
“They must have kicked you out of it”.