Once, I used this chart to explain three cornerstone requirements for an artwork to be appreciated by the public. It must grab attention, be easy-to-understand, and send across a relevant message that will switch on neural processes in the mind of the viewer leading to the appearance of memories, thoughts and ideas, which are to be followed by an emotional arousal.

Shakespear believed brevity was the soul of wit. Perhaps, in the written language this is so, but in the visual arts brevity is first of all the trigger of grabbing attention. A modern man is getting too much information to want to be distracted by unnecessary detail.

Graphic artists strive to minimise the number of colour areas and to simplify lines, mercilessly wiping out superflous details.

We don’t need to see everything to construct the required image in our mind. There are only 2 black forms in the drawing below, but they produce a complicated image of a face.

You also may notice the main black form resembles a big-nosed guy paying a large saxophone. It is very likely that was the artist’s intention.

The same principle applies to photography, especially its graphic, black and white category.

Look at this photograph by Billy Brandt dated back to 1952:

In graphical terms it took him 4 black smears or shapes/forms to define the picture, and, perhaps, he could get away with using just three. 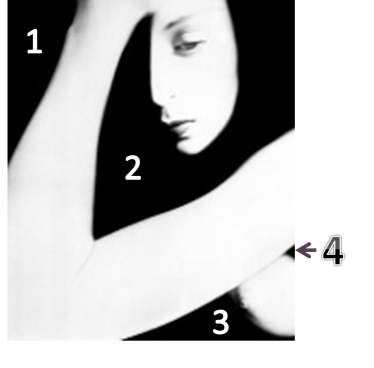 In 1958, Billy Brandt used just A SINGLE black form to tell a story: 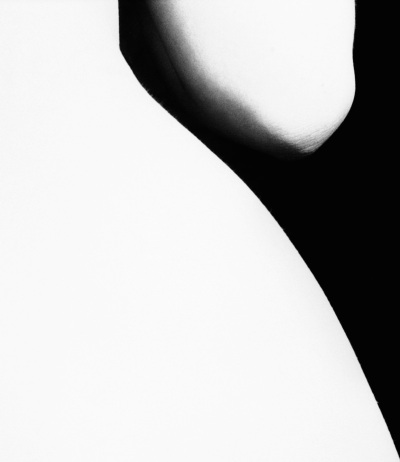 The main difficulty here is to identify (and exclude) details that are unnecessary to arrive at an image capable of sparkling viewers’ personal associations and keep or magnify details that are important.

A modern viewer doesn’t like too much detail: they are, perhaps, relevant to the artist, but hardly to an average gallery visitor. The complete absence of detail makes a work of art too general, and hence, not able to pick at the viewer’s personal “strings of the soul”, or, to be more precise, networks of neurons in the brain.

It is a very fine balance between creating an image that would be too generalised and hence empty of personal associations (“a woman”, “some woman”) and arriving at a depiction of something so detailed (“this is a man I don’t know, and no one I know wears a watch and tie like this”) that it also becomes a bell that can’t ring.

This Head of a Girl by Victor Dynnikov is a very good example of generalising the concept of a little girl who is over-cared by her mom (or grandma) and is – most likely – not happy about it:

The necessary detail: the striped hat, the puckered lips.

Brevity: our brain builds the striped hat out of stripes. The hat itself if not shown. There are only THREE large colour areas (besides the hat’s stripes). The girl’s hair and the collar of her coat are merged into a single shape.

I have seen a very personal resonance of this image with people in Russia.

Does it talk to you?

Among Dynnikov’s graphics works I have seen recently, I especially liked this brevity-is-the- soul-of-wit piece:

Two women and a man. This drawing is composed simply, but offers a lot of storytelling, with only a few shapes and very limited detail.

Can you gess to which woman the man in the middle is closer related?

I plan to share a few more “brevity is the soul of wit” images – in the meantime, let me know if you especially love any of this kind of images, send me a link, and I will have it referenced next time.

PS There is a strange kind of kinship between the graphics above and this photo: