As you enter the Royal Academy’s courtyard, you get face to face with a steel beast that stares back at you with the intensity of President Putin glaring at the map of Crimea.

This cross between Stephen King’s Langoliers and a huge vacuum cleaner is fast, deadly, and reflecting you if you get close enough.

I wanted to get away from its line of sight before it sucked me in, but when I crouched the beast turned into a howling cubist penis, which was even more disconcerting.

Lynn Chadwick is the name of the sculptor who made them in the 1990s, when he was in his early 80s.

Why would a man at this age want to make a scary group of steel animals? Perhaps, being married three times does it to you.

My all-time favourite group by Chadwick is this, aptly christened The Sitting Watchers (1974-1975). 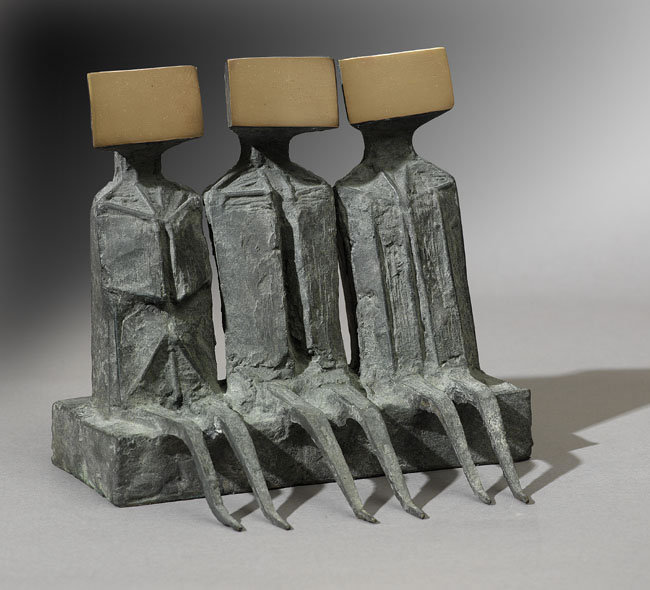 These attentively relaxed watchers, made at the time when typewriters were still selling well, suddenly take on a new meaning today: think of Snowden and his revelations.

And the symbolism of the observer’s face reflecting in the polished metal of the watchers’ “sceenfaces” enhances the unintended allusion.

It is also possible, of course, that Chadwick was not just a great sculptor but a prophet as well.

On a more serious note, when I was a kid, back in the Soviet Moscow and at about the same time these sculptures were made, we used to have a bench in front of each entrance to almost any apartment block. These benches were occupied, dawn to dusk, by three or more “babushkas” (old and otherwise lonely ladies) who would watch everyone leaving or entering the block. They’d wait for the passer-by to go beyond the hearing range to voice their opinion or suspicions. Many a girl in a mini-skirt would be branded “a whore” then. Often, when they would be still in the hearing range.

I am sure you had your own watchers.