Anyone who knows Matisse knows The Red Room, or The Harmony in Red, painted in 1908 for the dining room of a Russian collector. Most art lovers and Wikipedia readers are aware it was supposed to be blue, but Matisse repainted it because red was way better in terms of creating visual conflict and making the observers hungry. Neuroscientists confirmed some 60 years later that red colour drives the human brain to command the body to mobilise, that is to spend more energy than necessary, which (a) makes us more hungry and (b) pushes us to eat more, because we do it faster. So, Matisse’s choice of colour was scientifically justified even though he didn’t know about it at the time. 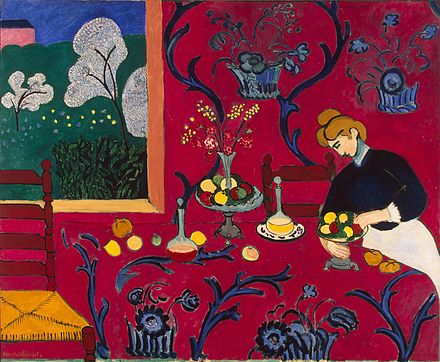 At the Hermitage (St.Petersburg, Russia), this painting is exhibited on the wall squeezed between Matisse’s other two masterpieces: wall-to-wall Dance and wall-to-wall Music.

Not enough space to properly show a painting worth, I guess, something in the range of $200-500 million, depending on whether you talk to a Saudi prince or a Qatar sheik.

Now, if you are still questioning yourself why this “childish painting” is any good, let me show you its workings.

Matisse’s perspective is organised without the right convergence point, with the line of sight sliding from the horizon level of the landscape in the window down to the line of scattered fruit on the table. 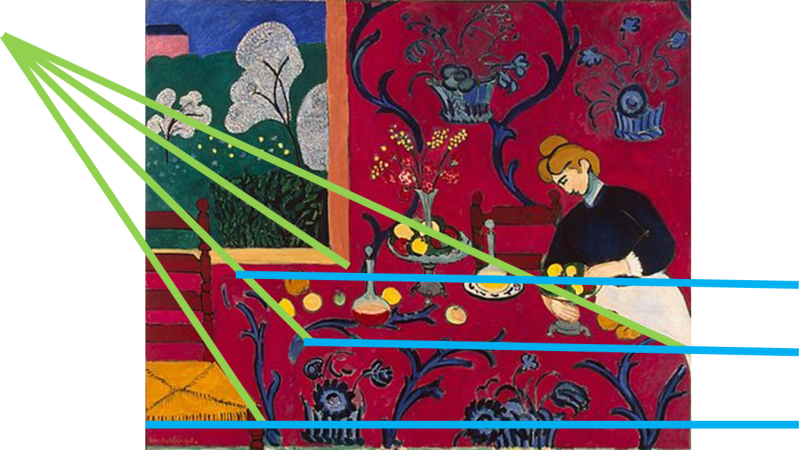 The focal point, being positioned outside, suggests there’s a lot more of this landscape beyond the confines of the window frame (and its left pane is absent to allow your imagination to roam the meadow). It also makes some observers to consider jumping out of the window, with the green field offering the same layout of yellow dots, as suggested by fruit on the table. Matisse tempted the observer to go outside, but his real intention was quite the opposite.

The shifting line of sight was conceived with a purpose. It makes observers dizzy, and they start looking for something to hang on. Matisse slides up the yellow chair for you to relax and wait for the dizziness to pass.

The natural landscape in this painting is, in a way, a clever joke. People hang up idyllic landscapes on their walls as “windows” into the ideal nature. Matisse makes you dizzy looking at it, offers you a chair and welcomes you to stay and enjoy the room, and what he made out of it.

The room does not offer you a convergence point. It stretches to the right for as long as you are certain that parallel lines never cross.

Matisse gives you The World of Indoors, filling it with multiple line, shape, and colour conflicts to keep you interested.

The geometrical horizontal lines of the table conflict with the natural lines of the ornament that grows vertically from the floor and up to the non-existent ceiling. The blues have their argument with reds, which clash with yellows. The drama is going on and on, endless, and I’ve not even begun to get intimate (from the art historian point of view, of course) with the lady who’s arranging the fruit.

If it were a poem, it would be a pleasure to read, but never possible to finish.

It was created for a dining hall, as a decoration that would motivate people to stay in the damn room without any rationally justified reason not to leave it. Artistic cruelty.

Now. The big secret I discovered last Saturday when visiting the Hermitage was this: 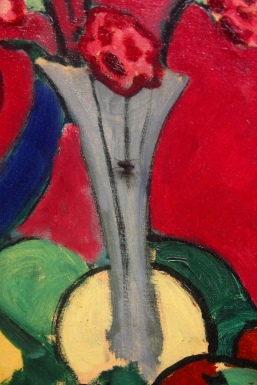 Did you see it? No? Edge closer, and pretend you don’t understand the gallery keeper is shouting at you to stand back: 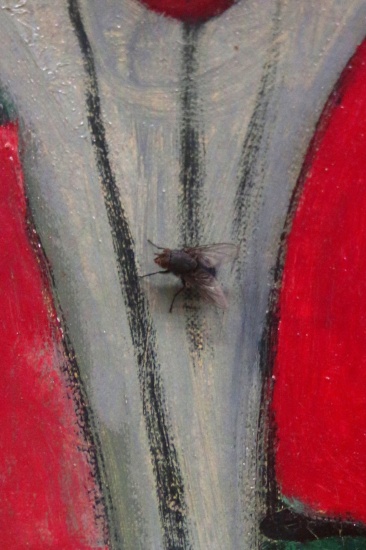 Yessss! Matisse painted a perfectly realistic fly on the vase to suggest that the brains of art critics, who lambasted and ridiculed his work and even called his Russian client a madman, were smaller than the brain of a fly, who naturally accepted this room and all the objects it contained as perfectly and comfortably real.

Now is the time to sit back and give Matisse a standing ovation, seated.

You may use the yellow chair, and while you are seated there, reflect on this:

When Matisse makes you sit in the chair inside his room, you get to face people who are present in the dining hall, so you’ve gone inside the painting without losing connection with reality.

I am now tempted to stand up and applaud him, even though no one can see me doing this.

P.S. Of course it was a real fly that I happened to capture at the moment she was fooled by Matisse, not painted.