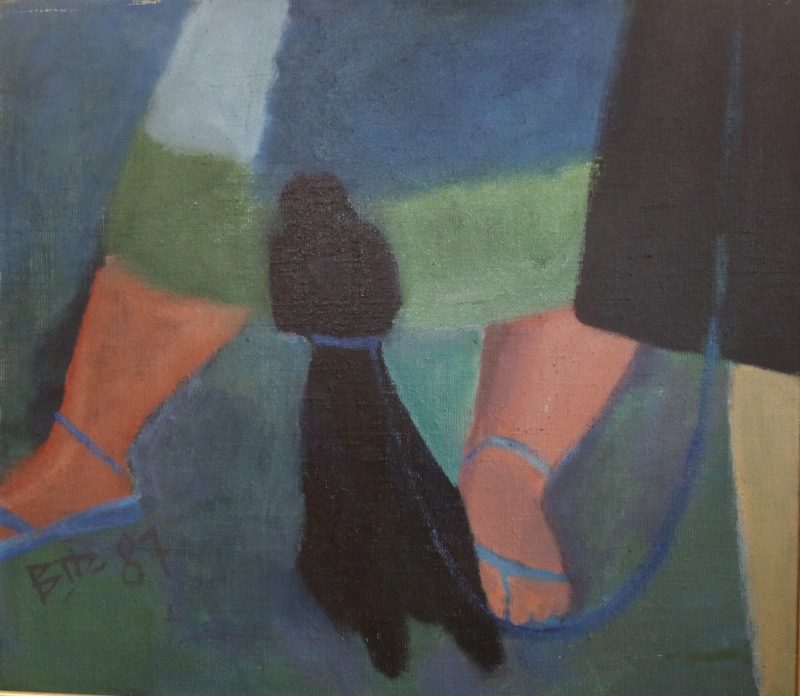 This is The King, by Victor Dynnikov, a genius Russian painter, who died a year before he was recognised. You must remember him from my previous posts.

Two legs and a small dog. What can be great about a painting like that?

The short answer is, “the story it tells, and how it tells it”.

The long answer is also the story is tells, as narrated by me.

Here’s the prequel to the story.

According to a widespread opinion, we don’t own our pets. It’s the other way around. We don’t put collars on them to take them out; they put leashes around our wrists.

In writing, this thought has been expressed a million times. It is easy to verbalise, but hard to show in a still picture. I can’t remember if I’ve ever seen the idea painted (Garfield cartoons don’t count) even though pets used to appear in drawings and paintings as often as humans. Alas, not as equals, but as accessories.

Cute dogs were painted as companions of nude women, a symbol of their loyalty to men who ordered their nude portraits. Hounds attended to moustached gentlemen as hunting stunts, and even great artists could get so much carried away painting them, that their gentlemen would come out as somewhat less alive than the animals.

Cats dialed up sexuality and grace, and sometimes so much of it that critics would accuse painters of pornography.

Exotic animals would add status to their owners, like modern selfies with celebs, except for an ermine that used to signal the lady holding it was pregnant. I am not sure there’s a celebrity who can imbue a photograph with this symbolism today.

Artistic representation of human-pet relationship has been largely limited to showcasing love between pets and their masters. A pet lovingly hugged by its owner? An owner with her pet looking up to her? Oh, not another one. Artists dropped this subject in favour of amateur digital photographers, who never tire of snapping away zillions of lookalike photos. The-Owner-Looks-in-the-Eyes-of-Their-Pet-and-Smiles is a topic so common our memory dumps its candied product the moment a new and similarly widespread picture is flickr’ed on the screen, tumblr’ing down from a cosy Facebook nook of its owner.

You won’t remember any of the photos tomorrow. Perhaps, the crocodile won’t fade that fast, but fade it will.

It is not easy to weave a visual story about a human-pet relationship without being overly sentimental, or abjectly pathetic, or both. It is hard to move beyond the cliché of a pet food ad.

The story in this painting is uniquely different.

We are introduced to a tiny poodle (or terrier?) and its owner, a portly woman with her sandaled feet firmly planted on the ground. The artist doesn’t show the whole of the woman to tell us who she is, but we can guess a lot about her from the clues we are given.

Her dress is a no-nonsense outfit: it is built of geometrical shapes of non-conflicting colours. There are no blossoming flowers or lacy frills on it. “Flippant air” is the least applicable descriptor here. She doesn’t want be in the spotlight with garish clothes or fancy shoes. If she wanted your attention, she’d say so, and you’d find it impossible to pretend you didn’t hear.

She knows where she stands. If you jump the queue in front of the lady, you’re as good as dead.

She’s no idler either: look at this big brown bag she’s holding. She’s on a mission that will see this bag filled with something essential (for her and the dog, no doubt) and she’ll need no help to carry it home. 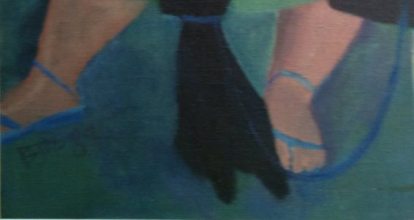 She might be burly, and homicidal to cheats, but she’s got a tender side to her character. Look at the sandals and the matching colour of the leash. Insensitive people don’t buy shoes to match the colour of their pet’s harness.

She is standing still, like a mountain in front of the dog. Her left foot is precariously planted next to the King, but Its Highness doesn’t care. The dog knows its owner would turn into a pillar of salt rather than step on it.

The lady owner doesn’t rush to cuddle, fondle, or scratch her pet. There’s respect between them.

She might be a pillar of the community, but she’d capsize without the dog, her own third column: the dog’s shape mirrors that of her own leg.

Now look at the direction of the three pillars. The dog’s pillar leans in the opposite direction to the legs.  If either of them is removed from the painting, the one who’s left won’t remain standing. She’s collapse to the right, and the dog would topple over to the left. Together they stand in balance, and the small dog outweighs its big owner. It is not a forced reciprocity: the leash is far from being taut, there is no physical effort in maintaining this balance.

She is a mighty queen, and the dog is her king.

The lines, the shapes, the rhythm of this painting may seem accidental decisions but they are not. 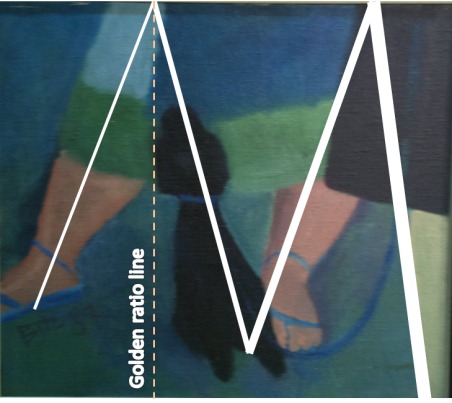 The composition is built around the lines that form the letter M, very balanced, with intersections and end-points of its lines giving a sense of perspective. Years of academic study at an institution named after an artist who was as much about the rules of composition as any of the famous Renaissance masters (Ilya Repin, and a relevant story about one of his paintings), made Dynnikov follow its rules even if he didn’t plan to follow them: the main action takes place around the golden ratio line. These compositional “tricks” give the painting, showing a standing lady and a sitting dog, a lot of movement, or inner dynamism.