The question was, “How are these two images related to each other?” Now, the first image is about a girl who makes it known to the citizens of an Italian town that a roaming theatre \ circus \ curiosity shop has arrived and their performance is about to begin:

Travelling performers would usually use a drum to announce that something interesting was going to begin happening in the main square. Then, the drummer would be doing rounds to collect money. Nowadays, drums are a prelude to the bass solo, and as any drummer can testify, money collection is the last thing that a drummer is entrusted with.

The second image is an Automaton: 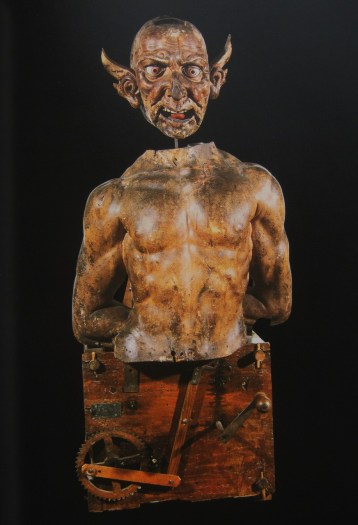 This automaton was exhibited by bands of travelling performers to the public some 400 years ago.

A clockwork mechanism that goes through a 16th century Christ torso to the head could make the devil turn its head, move the eyes, open the mouth, stick out the tongue, and make scary sounds.

It must have been a 16th century equivalent of watching a horror movie.