A sure way to make a laughing stock out of oneself is to point at something and denounce it as “low art”. You would be instantly reminded that the most venerated objects of art, from Shakespeare’s plays to Picasso’s paintings, had been seen as “low art” before they were recognised as the summits of culture, and that it is not about art spelt with a capital or lowercase “a”, but your desire to rise above others on a mere claim you’re smarter. Someone is bound to note this is a dumb attempt at self-appreciation as everyone knows today that the concept of high vs.low art is a sales tool to fool the mega-rich out of their money.

Why do people who agree with the above, keep insisting that cinema is either mass-market chewing gum for the brain or high-calorie art-house food for the mind? Why does art house cinema remain the last bastion of the high art myth? There must be something special about art house cinema, that puts it so high on the plinth of intellectualism.

Don’t expect to find an easy answer. Art house cinema is such an ephemeral concept that even the definition of an art film is built on its difference against all other types of movies: “An art film (also known as art movie, specialty film, art house film, or in the collective sense as art cinema) is typically a serious, independent film aimed at a niche market rather than a mass market audience”.

It’s like saying that “art is something that is not not-art”.

“Luke, I am your father, because all the other actors in the Galaxy were not interested”.

“Oscar Wilde is a genius of humourous writing because Dostoevsky is never fun to read”.

Very few things can be defined by negation. Zero, aliens, and god’s existence are among those unseen but useful concepts that can only be described by what they are not.

An alien is anyone who’s not from this planet (whoever they are). US immigration authorities believe this definition also includes people from other countries, whatever they can be, but this comes from a rather strong assumption that the US is a planet.

God exists because it can’t be proven otherwise.

And what is a better chance to experiment with art house movies than to watch the one intent to show God doesn’t exist? 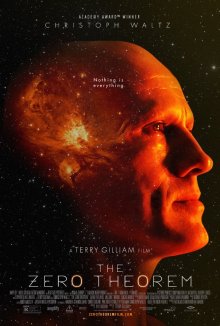 So, I set up a test, with me as the guinea pig, and Terry Gilliam’s latest film, The Zero Theorem, as the stimulus cheese at the end of the labyrinth. The film’s motto: “Nothing is everything” looked a promising negation.

The plot spins around a computer genius who is tasked by his bosses with proving that life as we know it was not a plan of God, but a Big Bang accident. Off-duty, the genius is waiting for a phone call from God, uses a burnt-out Orthodox Christian cathedral for a flat, and wears a WWII black leather coat.

Brevity, clarity, and ability to engage are keys to success in painting or sculpture, but in art house movies complexity, obscurity, and absence of a clear story get to be the required ingredients. Why?!

Perhaps, a mind-boggling revelation awaits the one who musters enough courage to get through the maze of an art house film?

Critical reviews won’t help: all you get is a vague promise of “interesting and satisfying existentialism”. Most people are full to the brim with their own existential stuff to want more from someone else. I, the lab mouse, just want the cheese at the end.

Fortunately, the critic was wrong, and the idea of the film turned out to be much simpler than its plot.

People who believe in God (which is equivalent to the hope of an afterlife) have to lead a restricted life. Some have to stay away from pork, others [try to] abstain from adultery, there’s even a religion that makes the use of elevators a sin on Saturdays.

They also have to spend some 5% to 10% of their life on religious rites (instead of visiting striptease bars or watching reality shows, and I can’t say which option is, actually, worse ), and generally make sacrifices, preparing themselves for the final interview with the doorman of whatever Paradise they’ve chosen to believe in.

So, compared to people who don’t believe in God, and thus are free to allocate their resources in any way they want, the life of a believer must be poorer, on average.

It is DYING that’s easier for believers, or rather the last moments, not poisoned by the bitter realisation it is the End, big time, without a new Beginning.

A better life for an atheist vs. a better end for a believer.

Now, what happens if a believer realises there’s no God, just before the end?

And what happens if an atheist gets a pre-final revelation that God, actually, exists?

If you are young enough to enjoy playing with these questions, Terry Gilliam’s Zero Theorem is two hours well spent. When I was a teenager I also believed that a heated debate with my teenage peers, fuelled by enough wine, could resolve the problem of matter over mind (and also secure attention of a girl I fancied). The plan failed on both counts.

If you think Terry Gilliam is a mountain in movie-making, but a bonsai philosopher, you can make your life richer by spending two hours of it just doing nothing.

I wish someone told me this, before I bought the DVD.

Having run the test, I circled back to my previous conclusion that art house films, defined by negation, exist only as a belief, similar to aliens or gods. My universal rule of dividing movies into great, bearable, and a waste of my time still holds firm, regardless of the fancy labels attached to them by the community of sophisticated critics.

P.S. There’s also a possibility I am not sophisticated enough.