A smiling saint?
A graffiti on a 13th century fresco, left by one of your ancestors?
A fashion idea from the 14th century?

This is what awaits us inside the Basilica of San Zeno. We spent some quality time outside it, now is time to enter.

Oh, if you have a toddler, you MUST come in, for San Zeno, among other things, is also a patron saint for kids who are learning to walk, speak, and use the pot rather than a pamper’s.

The Basilica seems larger on the inside than from the outside, just like VW Golf, at least according to their advertising, in which a lady driver (how sexist) can’t squeeze her relatively small VW into a comparatively huge space between two parked cars. 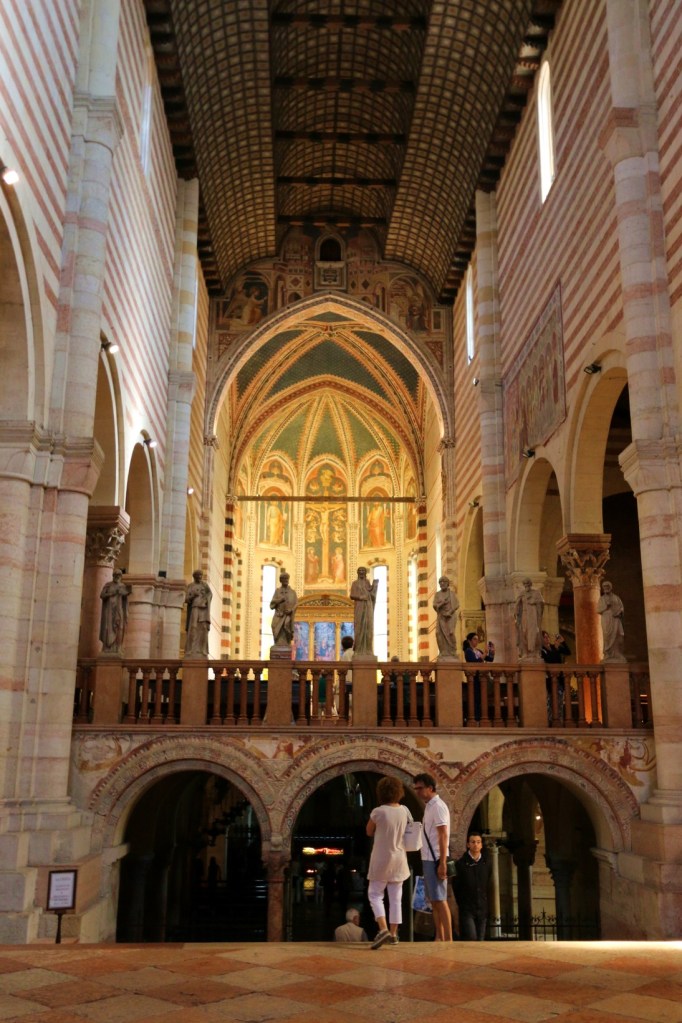 Most people rush to see the masterpiece altar painting by Mantegna, but we’d first go and see Saint Zenon. It is his church, so we must pay respect to the patron saint.

This is his 13th century statue, created by an unknown Picasso who lived some 700 years before the Picasso. To appreciate it, we must learn something of the saint first.

Saint Zenon lived in the 4th century, came to Verona from northern Africa, and was brown. That was confirmed a few years ago when scientists ran tests on his remains, kept in the crypt of this church, and went as far as reconstructing his face. He left a volume of well-written sermons, in which he made a strong point against the Aryan Heresy (Aryans’ didn’t believe in the Holy Trinity: they could not rational out the concept of the Son of God being the same as God the Father). The Trinity concept is a complex one, but Zenon offered a metaphor that more or less summed it up: “the Son and the Father are like two seas connected by a strait of the Holy Spirit”.

Common folk fondly remembered Zenon’s habit of fishing in the local river (he is also a patron of freshwater fishermen now), him being very nice with kids, and his successes at mass baptism. In fact he was an all round nice chap, the sort you could introduce to your mother without any fear of scorn.

His pastoral hobby of fishing naturally has led to him being portrayed holding a rod with a fish: 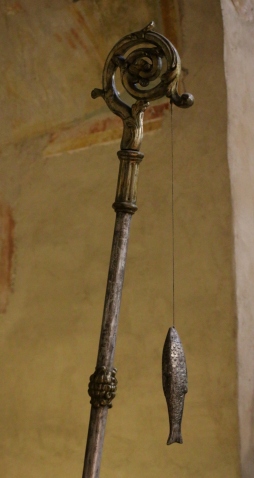 …a kind smiling face (standing out against the backdrop of stern faces of other saints):

… and a HUGE blessing hand with hyperbolised fingers. Note how the right hand is visibly larger than the left.

This is exactly what slightly maniacal Picasso did to fingers, noses, and some less appropriate parts of people he portrayed when he tried to show their inner character.

There is a bit of horror in this statue as well. Click on Page 2 at the bottom to see it!