Great artists steal, poor artists borrow. Picasso was first to say it, but it had been done long before him.

How to steal ideas from five other artists and still produce something they couldn’t have made, something truly innovative?

This is the final part on Mantegna’s masterpiece. Easy reading, if you’ve read Part III: you’ll intuitively understand what was “stolen” from whom.

Mantegna stole the general idea from the Donatello’s assistant who made this sculptural altar. It includes the overall shape, and the way the composition is organised. The stone altarpiece is far from perfect: 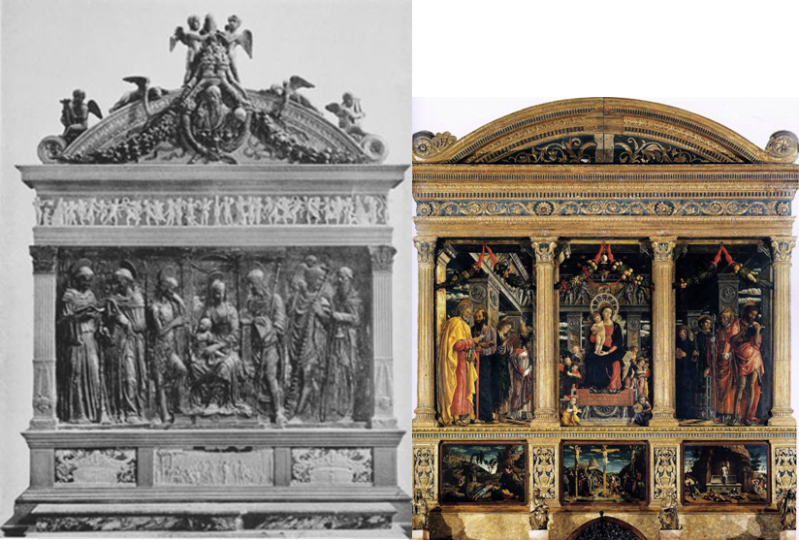 Mantegna then took Donatello’s own ideas of decoration, and, most importantly, proportions:

He appropriated the architectural ideas of his father-in-law, Jacopo Bellini, to create celestial space for the Virgin and saints:

And if I remove the woodwork, you’ll see it much better:

He also picked up landscaping ideas from the old man, clearly visible in the predella (and the cloud shapes as well): 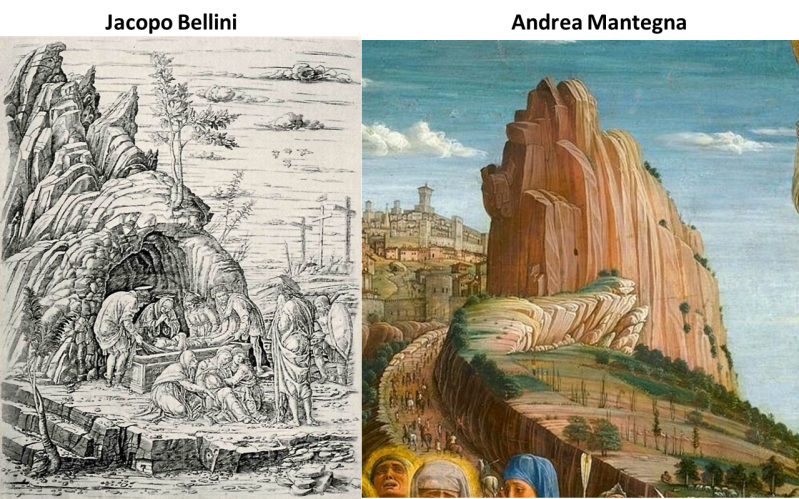 The rhythm and movement are both the influences of Uccello and Bellini, especially well visible in the Crucifixion predella. I am putting Uccello and Bellini together so that you could appreciate the extent to which Mantegna’s future father-in-law was fascinated by the Uccello’s visual trick, when the spears denote lines of action, lines of sight, and groups of people in a complex composition:

Mantegna puts the observer in front of Christ, and inside the crowd, but not above it. He then lowers the horizon line and uses landscape to add emotion and significance to the scene. In Bellini’s work (above) the crucifixion looks like a regular execution outside the town walls. Mantegna, having fewer people(!) at the foreground, makes it an epic moment with crowds of spectators, showing them as “dots” on the road to Jerusalem:

Indeed, with the show over, there’s no point to stay, unless you’re a relative of the executed or a soldier whose pay has been so much overdue that you don’t have money to buy a new pair of sandals and have to gamble on the meagre possessions of the criminals. 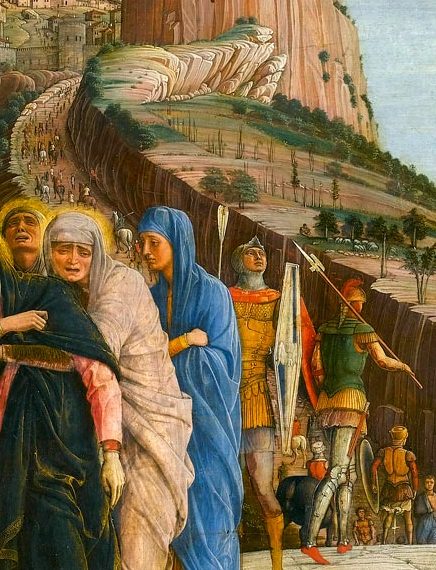 Who could blame this guard, looking at the torn soles of his shoes?

The love for anything and everything classical and antique was indoctrinated in Mantegna by his first teacher and adopted father, Squarcione. And even though Mantegna sued Squarcione to rid himself of his care, he remained passionate about all things classic. No one before, and for a hundred years after Mantegna could draw legionnaire’s armour with such “archeological” accuracy.

At this point, you may say, Mantegna just borrowed ideas and improved them. What was then truly innovative about this work? What made it worthwhile to steal?

In Part III, I mentioned that altarpieces were meant to be portals to the celestial world, with individual saints often portrayed in “windows” or “doors” opening up to Heavens:

Mantegna gives us not a window to the Heavens, but a 3D portal, 500+ years before the Stargate team came up with this:

He joined the Heavens and the mortal observer by placing the real half of columns in front of the painted ones, and hanging the fruit garlands between the two. I masked the woodwork again to highlight the trick:

Thus, Mantegna fused together painting, sculpture, architecture, and history (and one may also add archeology) in a single artwork. A 3D experience of the 15th century.

I can go on and on, talking about the way the saints communicate with each other, or how Mantegna changed perspective (a little bit) to bring the saints closer to the observer. Compare the “correct” preparatory drawing with the end-result:

You may ask me if all these visual inventions and tricks are…important? These subtleties may be lost on a tourist who’s on a mission led by a stern lady with the colourful umbrella who commands the group, the bus, and genuinely believes herding people with Tasers and cattle prods is not a bad idea at all. Think of the way people were watching this art before. They would see it day after day, mass after mass, often from different angles, and they would keep discovering nuances, details, emotions, themselves, the Virgin, the saints, and the Heavens.

I only wish galleries today would allow visitors with foldable chairs.

Before I part with this altarpiece, there’s just one “parallel” you may enjoy:

Now you can understand how much I envy these people:

Come visit Verona. Renaissance art is never boring, if you know its story.

PS And if you know someone important from Verona, can you have a word with them? I’d love access to Mantegna, for a closer view, when I come back next year. If you’ve heard me lamenting about the inaccessibility of Mantegna’s altarpiece in Part III, you’ll know why I’m asking.