For thousands of years men have prided themselves on being stronger, smarter, and generally better than women, created as a necessity for the reproduction of men by a man with a big gray beard whose difference from other men was his ability to make men without the help of a woman.

Don’t re-read this sentence. You can’t find logic in the deeds of someone who’s officially inscrutable. The same gray-bearded guy made men’s life expectancy shorter than women’s, so that women would realise, posthumously, how valuable men were in their lives, and pass the revelation on to other women.

Fair or not, it had worked perfectly until the 1970s, when something went wrong.

And again, the feminist kind of women were to blame!

Just like the very first time, when Eve decided to act without talking to Adam first.

A Renaissance artist of the 15th century from Siena can provide us with illustrative material of this Grand Descent. 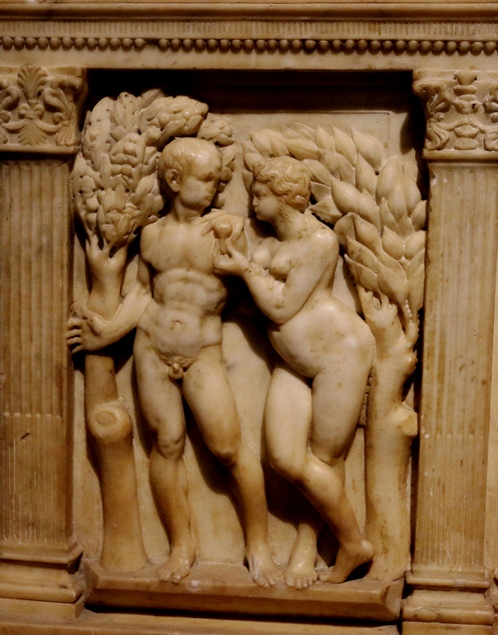 It was Eve who offered the forbidden fruit to Adam. Look at Adam’s private parts resembling an innocent bird. A German artist a couple of decades earlier made an even more seductive version * :

* I explain how apples and breasts are related here (Pure fun, and lots of apples)

And, of course, the man with the big gray beard couldn’t fail to notice that Adam’s “innocent bird” took to flight, so to say. I mean, other animals must have picked up the general idea of the pleasures of sex pretty fast. One doesn’t have to be omnipresent to become aware of a half of Paradise’s population struggling with erection.

We all know that on this Earth the speed of sound leaves much to be desired. Your mom tells you something when you’re 9, and it finally reaches you when you’re 35 and it’s too late. God loves you in a different way: his love is faster, and messages more direct. Once an errand angel lovingly kicks your bottom, you start descending.

The important revelation is provided by the same Renaissance sculptor (the author of the bas-relief above). Adam’s first reaction was to shift blame onto Eve. Look at his accusing finger. It screams, “It was her! She’s to blame!”

But if there’s one thing you can’t do, it is fooling God.

So, as Masaccio rightly showed some 50 years before the sculptor made this panel, Adam and Eve had to descend from the Garden of Eden, in equally shared shame:

What can it teach the modern Man?

That his instinctive, and inherent inclination to shift blame to women is intolerably shameful for someone who deems himself bigger, stronger, and smarter.

Adam showed himself as an infantile teenager incapable of taking responsibility.

Has anything changed since the Descent? Or, at least, since the Renaissance artist exposed Adam’s immaturity?