Animals bring a lot of suffering into our lives.

Driving a county road can be hell.

Uncountable couches have been ruined by animal secret agents, aka “pets”. 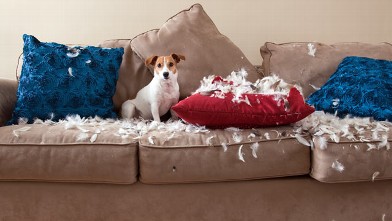 Expensive equipment is known to have been stolen and otherwise damaged.

That’s the price we pay for being carnivorous, so fair’s fair (This also explains why vegan activists are often aggressive towards meat-eaters: vegans can’t square up to cows and bears)

Animals can’t be blamed for misdemeanor though. They are neither kind nor cruel: they didn’t get to eat an apple from the Tree of Knowledge to know good from evil. They don’t feel sorry for you. They don’t empathically smile back when they witness your happiness (*)

When animals want something, they go and get it. You happen to stand in the way? It’s your problem, not their fault.

Instead of addressing the controversy of human-animal relationship, visual arts have been mostly kind to animals, showing them as harmless toys or even friends of people. And where has it led us? The Cute Cat pix epidemic!

Yet, history knows a few artists who were courageous enough to show the truth.

We have Filippo Palizzi with us today, an Italian artist of the 19th century, who braved  making small-size “genre” paintings about animal being insensitive to people.

His paintings may seem simple, or even simplistic, at first glance.

Indeed, this painting is simple, but in a clever way.

The left side of the painting is peaceful and ordely. The bleating river of sheep flows down the road to a communal spring. The front-row sheep stop as soon as they reach water. Other sheep pile up behind them in a humble queue. The shepherd dog comes first, exercising his “right-of-passage” privilege.

The right side, with the road becoming a perilous affair of shattered steps, is filled with drama.

The girl (what’s her age, 6 to 9?) gets knocked over by a young and rule-breaking representative of the otherwise humble herd (not surprisingly, a flock of sheep is also a mob). That proverbial “black sheep” (there are a few of them, it seems) decided to cut in front, skip the line, be the smartass. With the shepherd being at the back, and his law-enforcement agent being busy watering itself, there’s no one to discipline it there.

And no one, absolutely no one cares about the girl weeping over her broken jug. 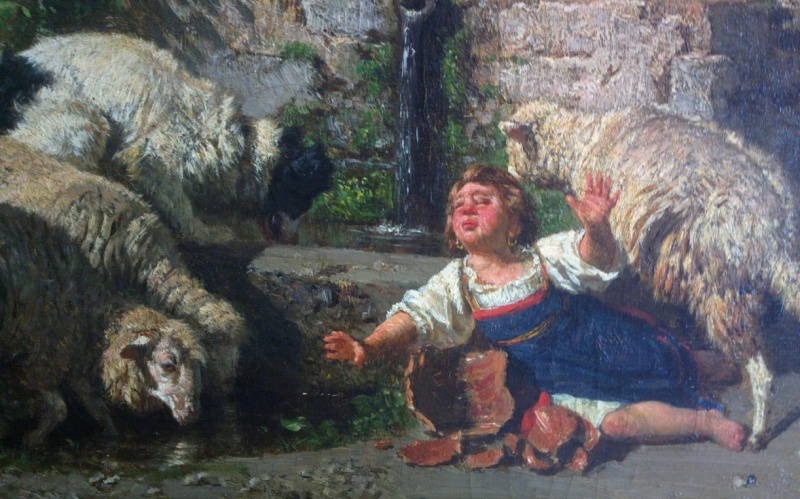 It feels like in a modern traffic jam, when a compact Fiat trying to change lanes gets rammed by an aggressive BMW (in Italy, replace “BMW” with “a compact Fiat” and the original “compact Fiat” with “any other car”). While the street becomes dense with fumes, verbal abuse, and middle-finger duels, traffic officers are watering themselves somewhere else.

If you happen to live in a god-fearing country of polite driving and law-abiding citizens, you won’t understand (**)

(*) Unless, of course, they know they’re in for a treat when you’re happy. Then, there’s that problem with apes: it has been proven experimentally that they show empathy towards other apes. Perhaps an ape picked up the core of Adam’s apple? I expect the next Conclave to figure it out.

(**) Happen to know a god-fearing country of polite driving and law-abiding citizens which is not Switzerland? Gimme the name!