People dream of societies that live at peace with each other, and are prepared to slaughter millions to achieve this ideal. More than once, God himself, having realised his plans for humans were going astray, reset the civilization to ground zero with holy weapons of mass destruction. God’s biggest promise itself is a new order that would follow the absolute and final extermination of everyone living. Don’t forget that God loves people, at least in the majority of religions, He made us in His own image, so people’s love-hate relationship with war shouldn’t surprise anyone.

Art has been walking hand in hand with War for most of its history, mostly glorifying the victors. Examples to the contrary, showing suffering and desolation caused by wars, are very few and relatively recent.

If you ask an art history expert about art dedicated to war suffering, the Christian theme of the Triumph of Death is very likely to come up first, even though it was more often used as a moral reminder that Death does not differentiate between people than a contemplation of war’s consequences. That “theme” was first spotted in the 14th century, reaching climax in Pieter Bruegel’s painting of 1562: Yet, even here war does not take full precedence over other, less violent causes of human demise. War is a part of life here, but not an extraordinary occurrence.

Surprisingly, the first artistic insight into the consequences of War appeared more than a hundred years before Bruegel, in 1338, when Ambrogio Lorenzetti was commissioned to paint a fresco in Siena’s Palazzo Publico. Today it is known as The Allegory of Good and Bad Government, but originally it was conceived as The Allegory of War and Peace.

Trade is dead, buildings stand empty, and crumbling, with no one trying to mend the facades. Stone debris cover the empty streets, and no faces can be spotted in the windows. This fresco provides a stark contrast with the Effects of Good Government on the opposite wall, which is about education, merriment, and prosperity.

Sixty years after Bruegel the issue of war-caused suffering was addressed again. Jacques Callot made a series of 18 etchings dedicated to the Great Miseries of War in 1633, featuring marauding troops, pillagers, and executions. This “Hanging” is known best:

Rubens was inspired by the same atrocities of the Thirty Years’ War when he painted his own anti-war statement five years after Callot’s etchings. His Consequences of War send a powerful, albeit hopeless, allegorical message: war tramples upon arts, humanity, knowledge, and life itself, and no love can stop it, even if it comes in the image of a naked sex symbol of the 17th century. 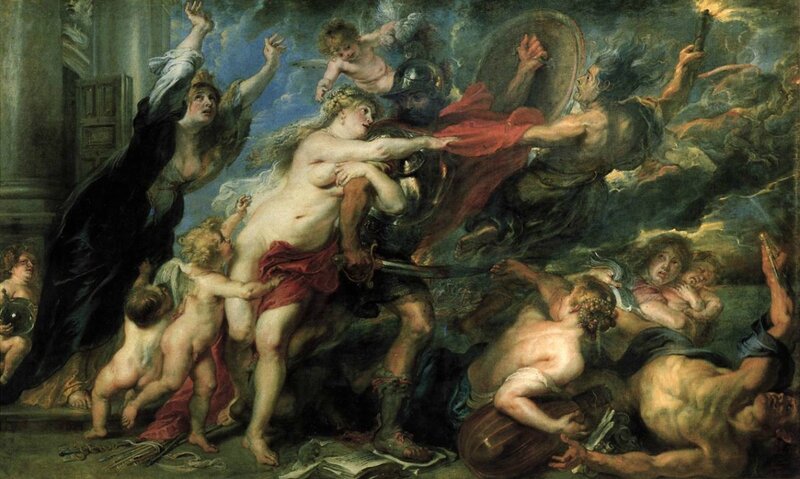 Strangely, while the message is clearly there, the painting lacks emotional impact, for it states the obvious in a rather literal way. War is known to silence arts and to kill people. Love is not known to stop War: it is Victory or Exhaustion that put an end to it. So what? The allegorical figure of Europe with her arms thrust towards the skies is, perhaps, the only image truly relevant today, especially in view of Germany’s threats to cut the slice of Greece out of the EU common pie, if their nationalistic party with populist agenda wins the elections.

An overdose of allegory is just as bad for a painting as too much focusing on naturalistic detail that links it to a very specific conflict and does not allow for a generalisation.

There is one allegory though, that still reverberates as clearly and emotionally as a Stradivari violin. It’s Goya’s mad paintings, made early in the 19th century, and inspired by civil strife in Spain: 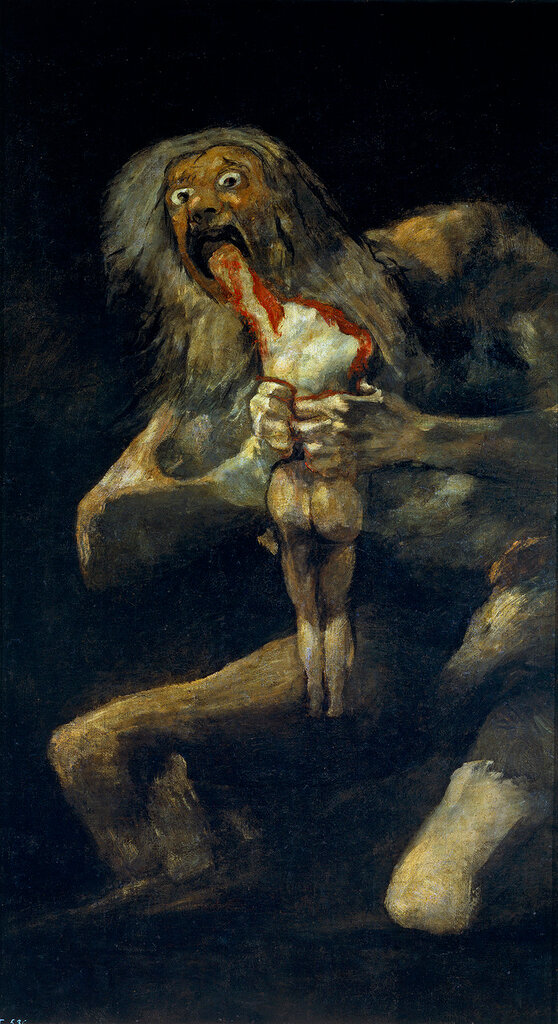 Wars do not just kill off scores of people, separating them into winners and losers.

Wars exterminate humanity, and do as much harm to the victors as to the defeated. The defeated lose their lives or freedom, and the winner loses his soul, or humanity.

A very good friend of mine who inspired me to write this post, shared with me a Goya’s painting that he finds most horrific:

Just as Saturn devouring his children, it was painted inside Goya’s house. We don’t know what it means, but we can safely assume that the inspiration behind it was similar to that of Saturn. This friend of mine interprets the painting as something a fallen soldier might see in his final moments. Other people may interpret it differently, but what is certain is that any verbal narrative freezes down and dries up in the face of this visual image. If my friend’s interpretation is right, it can be seen as a war-consequence painting.

In the 19th century, with weapons of destruction getting more and more powerful, artists went for the shock of mass death to make observers recoil from war, if not their paintings. In 1871, Vasily Vereschagin, a Russian artist, assigned to document a Russian war in the Central Asia, came up with this Apotheosis of War which he explicitly dedicated to all conquerors, past, present, and future:

The painting references legends of Tamerlane who is believed to have repeatedly erected such pyramids with sculls of people he didn’t quite like. Vereschagin modernised the story by showing bullet holes and saber slashes on the sculls.

Eight years later, Vereschagin produced another powerful testimony to the mindless brutality of the Balkan war in the Fallen:

But it was the WWI that would change the course of arts forever. The indiscriminate, inhumane slaughter that it unleashed made artists turn away from the traditional representations of war consequences. Artists wanted to discover imagery that would not just truly horrify observers (photography and film were quite capable of that), but would make people recoil from the concept of war, not just a particular conflict.

At the time, Spanish artists were most prolific in producing War-related allegories.

Picasso, perhaps, is the most well-known with his Guernica, which proved to be so powerful, its copy at the UN was draped for the press-conference of Colin Powell on the start of the Iraq campaign.

Then comes Salvator Dali with his Face of the War (sculls within sculls) and the Premonition of Civil War, the latter showing a body destroying itself: 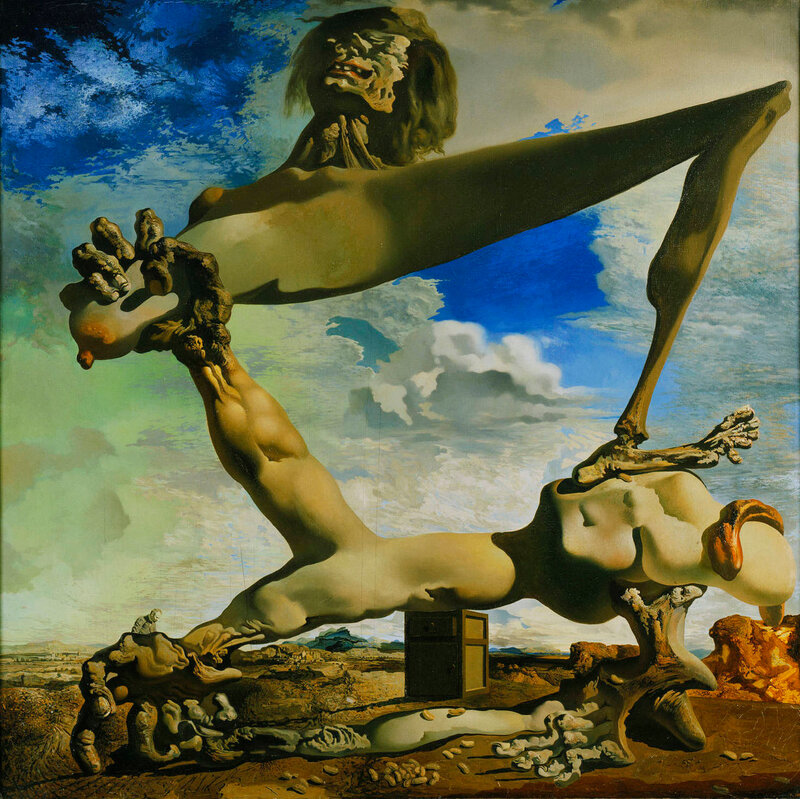 Powerful, isn’t it? But does this gruesome painting really make you shiver? Well, perhaps it does, but I see a lot of Dali’s personal sexual obsessions here, and it somehow narrows its impact.

And then another Spanish artist reinterpreted war once again. Still Life with Old Shoe (1937) by Joan Miro is one of my all-time favourites.

It is both a landscape and a still life, showing very simple objects: the eponymous shoe, a loaf of bread, an apple with a fork stuck in it, and a bottle. You can find these objects in any house, even in a war zone. The key colour here is black. It permeates everything, it spoils the food and poisons the drink. Wherever you are, war finds a way to get you. Black is unstoppable here, it seeps through the canvas, coming at you from behind it, and as you watch the painting, its blackness expands, grows bigger, and devours all these simple elements of life.

For me this is an ultimate anti-war statement: there are no escapees, there can be no survivors, even if the war is waged far from your home. War is an all-consuming fire and blackness.

I find it somewhat strange the painting is not on display (and not on loan) there. Is it a too powerful anti-war statement to be shown to the public?

P.S. I have intentionally omitted some of the best war-related works by Sargent (Gassed), Paul Nash (We are Making a New World) or Steve McQueen’s Queen and Country. There are many more out there, and I’ve chosen the most famous + my favs. Please share your favourite war-related artwork! Do you have the one that resonates with you?