I still remember my first slow dance with a girl I fancied at the time when instead of proper chemistry I was researching the effect of having crystals of Iodine dissolved in Ammonia solution (a bang occurs when the resulting residue dries up, loud enough to make the teacher beat the school’s record in vertical jump). This, and the day I got drunk for the first time are the three things I remember from my school days.

Dance is a single reason to come to National Gallery’s Inventing Impressionism show twice. I mean the three Dance paintings by Renoir. Rarely shown together since they were sold by Paul Durand-Ruel, a famous dealer who commercialised the Impressionists, they offer an ironic insight into the passions swirling on the dance floor.

Art historians seem to know everything about these paintings: time, location, model names, and brands of clothes they wear, but I feel the painter’s idea has been eluding them or they didn’t feel the general public should be made aware of it. Let’s remedy this, for it is best seen when the three paintings are together.

Pierre-Auguste Renoir made two paintings of dance in the country and one ballroom version in 1883.

Look at them and note the major difference between the two types of dance:

Outdoor dancing is much wilder than its ballroom counterpart. In the country, men don’t have to put on gloves, women can wear loosely fitted ones; the movement is dynamic, the plants, trees, and feelings are real. The ballroom type, with its somber white columns, potted plants, controlled steps, and orchestrated music, pales in comparison. That is, at first glance. Because at second glance, we can notice that the two country scenes are very different to each other, and there is a lot of passion in the ballroom scene too.

Let’s get closer to the couple in the middle, who seem to have left their table in a hurry to join the merry-making on the dance floor.

The man has put the hand of his lady in a firm grip, but she holds on to her fan as if it were a symbol of her independence. She didn’t take off her gloves: it is another barrier between her and her partner. The man is obviously quite taken by passion: he dropped his hat, but doesn’t notice it, his lips are almost touching the cheek of the girl, his eyes are cast down towards her face.

While she maintains her barrier at the top half, she’s quite flirtatious at the bottom: look at how her dress is painted against his leg. First, there is no separation between her dress and his suit, it looks like an Yin Yang symbol. Second, it’s the tiny details that you can only see up close and personal.

The blue reflection on the dress is very weak, implying there is no distance between them. The vertical border of the dress is also slightly shaded, because it is pressed against his leg. And yet, her hand rests on the man’s shoulder without embracing him, and her eyes flick back to the observer (and the artist).

She’s aware she’s being watched, and she flirts with her partner and the observer.

I can understand Renoir who used his future wife as the model here, and, perhaps, could not show her infatuated with one of his best friends, but I also understand her: she’s obviously playing with the man she’s dancing with, and with the man observing the scene, and enjoying every moment of it.

Now let’s spy on the left couple. Their dance is much more dramatic. When thinking about it, we need to remember that Renoir painted the background of his portraits to express his view of the portrayed person’s character. Here, the background is not just merrymaking and chatting. There are more men than women in it, and girls appear somewhat “hunted” by men.

Compare the way this man is dressed to the previous gentleman. He is very casual. Of course, dancing at a country cafe didn’t require a formal suit, but a white shirt and black shoes were still a must. Our guy breaks all the rules. And there’s something wild about him that screams he can, or at least he thinks he can behave like a predator.

Look at the way he holds her. In the previous dance, we had “separation” at the top and union at the bottom. Here, the position is different.

At the top, there’s a lot of passion: his neck is craned towards her, and even though she averts her head, perhaps, to avoid his forced kiss, her hand is thrown over his neck.

At the bottom it is the opposite: they are apart.

We don’t have a thin “blue” line separating the girl from her partner. Instead, we have a blue blur that signals motion, clear lines that mean separation, and blue reflections indicating distance:

So, what’s going on in this painting? The girl does not seem to offer much resistance, otherwise she wouldn’t be embracing the man, yet she somehow doesn’t what “it” to happen here and now. What is she afraid of?

Perhaps, the clue is in the painting itself. We just need to follow the girl’s line of sight.

She looks at the flower on the floor. A cut, used, and thrown away flower, the colour of the man’s suit. Does the man strike you as an experienced ladies’ man  who had seduced and abandoned a legion of poor souls before his eye fell on this beautiful girl? Even if he does not seem the kind to you, the girl still doubts the prudence of offering him her lips. She wants to, desires to throw herself into his embrace, but… remember the flower, sweetheart, remember the flower, she keeps telling herself.

A friend of mine, having studied the painting, noticed a ring on her ring finger. Is she engaged? If yes, then it is unlikely she is engaged to the man she is dancing with: he doesn’t have a matching ring.

And now, we sail on to the ballroom, that initially seemed so lacking in passion against these country-cafe diversions.

How do they feel?

Unlike in the country dance paintings, we don’t see much of the man. But what we can see is quite revealing.

And what about the girl?

Perhaps, Renoir left us clues about her character too?

The simplest clue is this:

Have you ever played with making shadows on the wall with your hand?

Look at the space between her thumb and index finger and then look at her slightly parted lips.

She and the man are bound by the rules and norms, but she dreams of a kiss, and that dream makes her blush.

If we look at her dress, which is cut by the frame, so that we don’t know where it ends or originates from, it looks a metaphor for passionate innocence that climbed up the man like a snow avalanche, just going upwards.

Remember, all the three “dances” are life-size: Renoir invites you to become a participant, and build your own plot from the glimpse of a story he painted in each of the them. 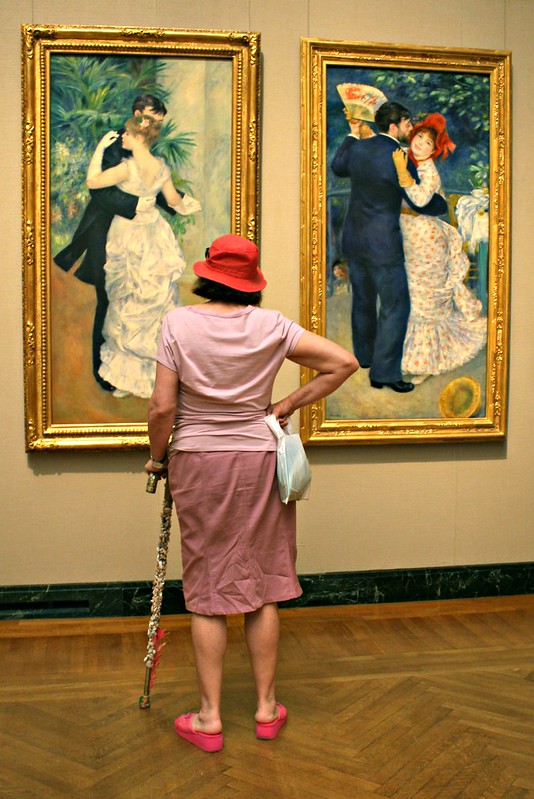 Сlick on the photograph to get to its source

And if you are not satisfied with life-size, there is a US artist who offers you an alternative:

It’s fun, I agree, but… it’s not good for artists. Artists who can’t make a masterpiece of their own love to exploit masterpieces of the past by turning them into hollow pop-art exhibits. It is an easy path to commercial success, but it is often a one-way road: there’s no turning back to creating your own masterpiece.

I am coming back to the show to see the three of them together, and then back again once more. It’s almost as good as mixing Iodine with Ammonia in the school lab and watching your classmates catapult themselves in the air.