Now that we have explored the ground floor of the Giovanni Fattori museum and haven’t yet seen anything from Giovanni Fattori himself, we need to get one level up, to finally get to know the painter.

And what a staircase is it to climb! On my scale of gaudy, it stands a notch behind Jeff Koons.

As you climb the first flight of stairs they face you, as you go higher you are presented with a spectacular view of their very un-childish bottoms:

They are far from being happy, what with the iron rods stabbed in their heads! If you bend down to get to know them better, you get a feeling that something creepy must have been happening in this luxuriant and opulent villa while its owners were alive. 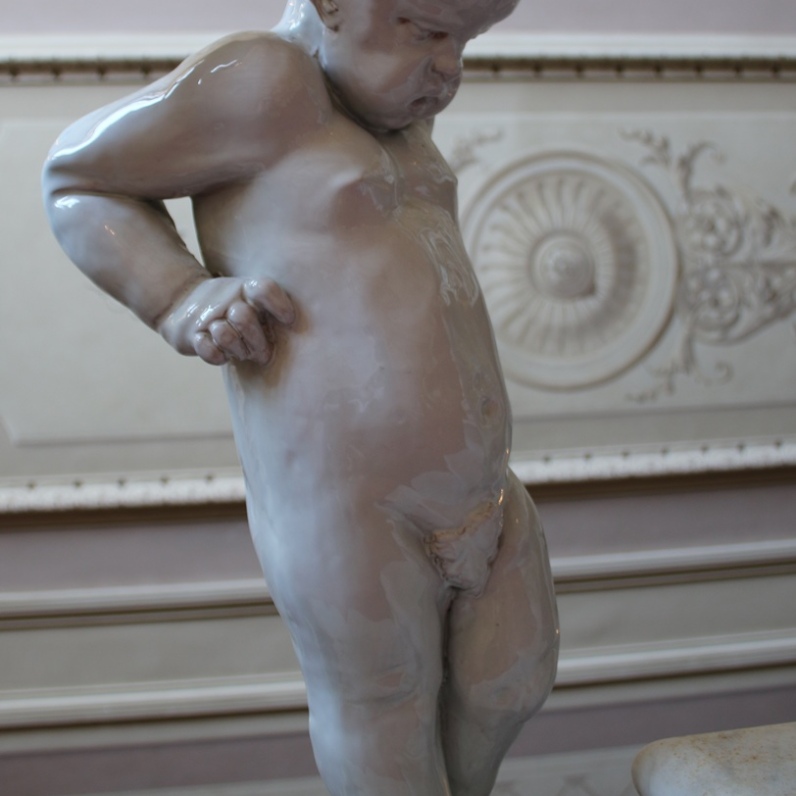 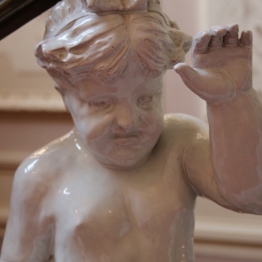 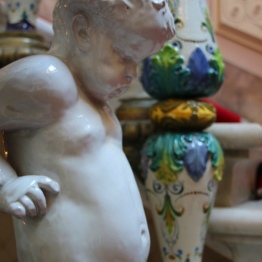 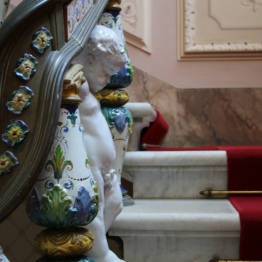 Once you’ve mastered the stairs, getting an unhealthy dose of suffering putti along the way, you get to a spacious hall with a crowd painted on the ceiling.

The ceiling captures an exciting moment in the history of Livorno, as well as in art history.

It is the unveiling of an addition to the monument to Ferdinand I de Medici in 1624. The statue itself was erected in 1601 to celebrate naval victories of Ferdinand over Moorish Corsairs. The statue was made by Bandinelli, an admirer and rival of Michelangelo but without any talent for large forms. I wrote about the guy here, and if you have been to Florence, you must know his major work that stands next to David.

More than 20 years after Ferdinand’s statue was erected, it was decided to add captured Moors, who – coming from North Africa – were usually dark-skinned or black. Painted bronze was seen as a suitable material, and Pietro Tacca, a former pupil of Giambologna, was commissioned to make four figures of defeated pirates.

It’s not often that one can see a sculpture which “accessory” part is better sculpted and more expressive than the main one.

The observer invariably pays more attention to the Moors than the dude who defeated them.

Everything about them is spectacular: their twisted bodies, their faces, of which some are rebellious, and some are quite resigned.

There is a legend that Tacca used two real slaves as models for his sculptures who were set free when the work was completed. One of them settled in Florence but would take his family to Livorno whenever possible to boast of the likeness of his face to one of the bronze Moors.

Of course, the Moors don’t look as black today as in the ceiling fresco, but someone who doesn’t know the real history behind this sculpture may see the whole composition as an offensive symbol of racial superiority. And, believe me, in the presence of black people selling fake bags nearby with white tourists taking pictures of the monument with their uber-expensive Leicas, Canons, and Nikons, this modern interpretation of a historic sculpture does not seem all that irrelevant.

Enough of the creepy stuff. Our next stop is at Italian art of the 19th century.