Simple words possess magic powers, in much the same way that magic spells, actually, don’t. I will use a single word now to summon the attention of one particular individual, and, in the process, explain how the trick works.

What was your first thought, your most salient association when you read “stoned” at the top?

Was it the ugly habit of killing people by throwing stones that is still practiced in some cultures? Well then, you are either a conservative, whose sleep is disturbed by visions of ISIS fighters on your doorstep, or a liberal pundit fighting for women’s rights.

If you thought about a stoned drug addict, you are either a liberal with fond memories of this mind-numbing effect or a conservative who views all liberals as worthless hippies. It doesn’t mean I think conservatives have never zoned out, of course. Some of them are known for escapades that put iconic liberal hippies to shame.

If a fruit materialized in your mind, you must be British, because in Britain fruits (e.g.apricots) have stones while in the US fruits have pits.

If a stoned grave sprang to your mind, you must be – Bingo! – the one individual I promised to summon, my friend Igor (hello, Igor!) who went to see Chagall’s grave the other day and discovered it had been buried under a collection of stones left by his admirers.

You may think that with Igor venturing to a cemetery, it is going to be a fiction story. Nope. It’s real. My friend’s name is indeed Igor and he’s not a proverbial assistant of an evil villain, who decided resurrecting Chagall might not be such a bad idea, given the sad state of contemporary art. Although, if such a villain really existed he wouldn’t be all that evil, would he?

“Visiting stones” are part of an ancient Jewish tradition. If you visit a grave of someone you respect and remember, you leave a stone on it. 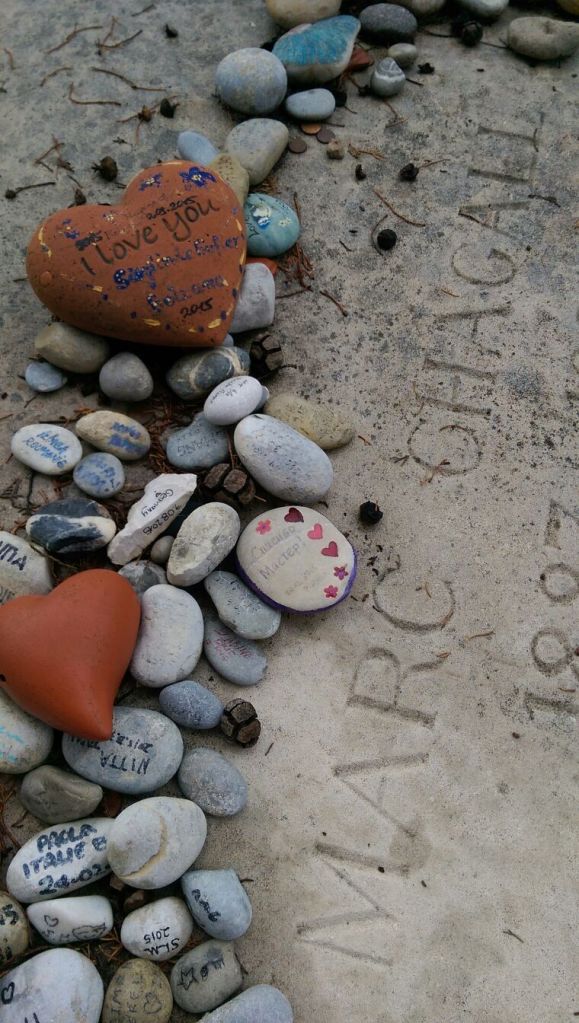 The only difference with Chagall is that in the classic tradition you leave an unmarked stone, like the ones on Oskar Schinder’s grave, which is visited now by 6000 people who are descendants of the 1200 souls he saved during the war:

Sometimes, people bring flowers, their own drawings, and unmarked stones to graves of artists (this is Modigliani’s tombstone):

My first reaction to Igor’s photos was… mixed. I though, “A heart shaped souvenir” with “I ♥ you” on it!? Is this the way to pay respect to an artist who has helped millions of people find happiness in their bleak and often horrible circumstances? Is this appropriate homage to a painter who has made the Bible look like a book of clever stories with a happy ending?

And then I thought I was being so snobbish it had blinded me to the obvious. Even if “I ♥ you” translates “I ♥ myself for being so culturally advanced that I’ve made a detour to see Chagall’s grave”, it works. Chagall makes people happy with themselves even from his grave. without lifting a finger. And, on the bright side, they have to bow to put the stone down. Even if the act of bowing does not consciously register as respect, there must be an unconscious level on which it does.

Is it a good tradition then? Well, it is competitive, that’s for sure. The more people remember you, the more stones your grave accumulates for everyone to see that you are remembered by a lot of people. I don’t know if pride or envy have any benefit for the dead, but this rocky equivalent of Facebook “Likes” must make the living think of doing something good for other people while they are still living.

The only problem with this tradition is its origin, or rather its most plausible explanation. It is, of course, the most improbable one at the same time, but scratch any religious tradition, and you’d find plenty of plausible improbability beneath.

This is the story:

Shui Haber. Halachic Researcher at Mir.
A story that happened in Jerusalem, retold in Sefer Ha’Todaah (Book of Our Heritage) by Rabbi Eliyahu Kitov:

“Rabbi Kalonymus Baal Haness, who is buried at the foot of the Mount of Olives… was instrumental in saving the Jews of Jerusalem from the effects of a blood libel. The Ishmaelites had killed one of their own children and thrown him by night into the courtyard of the synagogue in an attempt to destroy their enemies the Jews. Although it was Shabbat, Rabbi Kalonymus wrote one of the sacred names of G-d on a piece of parchment and placed this on the forehead of the murdered child. Immediately the latter stood up and pointed an accusing finger at the true murderer. But Rabbi Kalonymus passed judgment on himself for having desecrated the Shabbat and commanded that after his death whoever passed by his grave should throw a stone thereon. The people of Jerusalem carried out his wishes, and it became the custom that whoever passed there added a stone to the heap on his grave.”

Yes, it goes back to the myth of Jews and their recipe of matzoh with blood of children. I am not sure supporting a tradition that lies at the heart of the Middle East conflict was something Chagall admirers, especially the ones of Ishmaelite descent, wanted to do or even thought of.

Perhaps, flowers will do next time you’re at the site.

What I am certain about is that Chagall didn’t feature a lot in this blog, and it’s time I put down a stone of my own. So, stay tuned, Chagall is coming soon.

In the meantime, please tell me what you like (or don’t like) about Chagall, what you understand, or don’t understand about his work, and which works are your favourite. This will be a great help for me!

PS No liberal or conservative was harmed in any way in the process of writing this post.