We all know there’s lots of money in fandom: all those tickets, scarves, t-shirts, badges, and hospital bills for cracked skulls, squashed faces, and broken teeth. When I think of fans, and especially fans of popular games, I imagine a legion of happy bartenders, dentists, and Chinese exporters of fake club paraphernalia.

Ever since men first united for a mammoth hunt, they’ve been happy to splash on tools and tokens that would help them reach their cause, even if it was another evolutionary dead-end.

Fans, and especially male fans, are a treasure trove for any trade, because men get irrational when it comes to being a club member, especially when this club encourages mad behaviours, idiotic hats, and girls’ getting topless.

Men frown at their wives when they want to change curtains bought ten years ago (“nothing’s wrong with the old ones!”), but are happy to buy club shirts that change design each season to make fans keep buying them, and then pay for tickets to stand-up shows to be informed by comedians of how stupid they all are.

Fandoms keep everyone happy. Except artists.

Artists celebrate sports and sportsmen, but ignore fans and their fandoms.

My dear fellows, why do you turn your back on an opportunity that’s more generous than Donald Trump in his promises?

The global art market features precious few artworks that celebrate fans (if you take wedding cake toppers off the list). 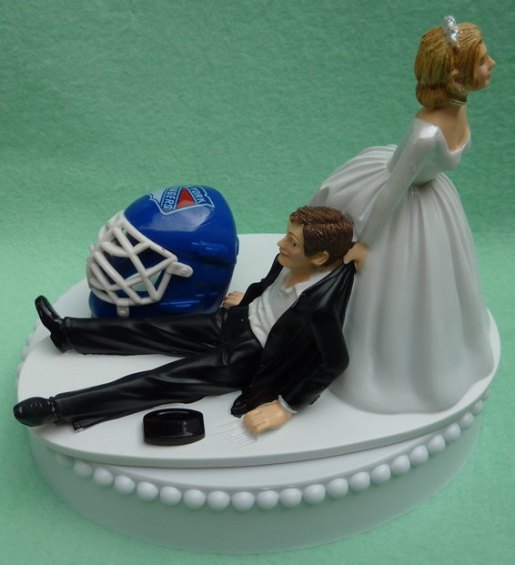 Throughout art history fans only feature in supporting roles.

And only occasionally, in preparatory drawings or sketches, fans take centre stage:

In the examples above, artists used the audience as a backdrop to enhance contrast in their work. The strained body of the fighter becomes all the more strained when contrasted with a relaxed pose of a spectator. The honestly of the fight becomes accentuated with a fat cat watching it with a betting interest in his eyes. Still, it’s never about fans themselves!

In my search of artworks dedicated to sport fans, I couldn’t walk past Toronto.

There, Michael Snow, a renowned polymath artist, mounted sculpted fans high up on the wall of a stadium. This is a rare case when sculptural caricature is paid for by the caricatured (indirectly via taxes, of course). 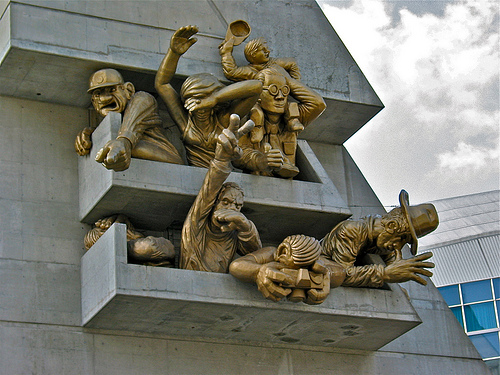 I find it strange. Is there nothing to glorify about fans?

Fandom can be a good thing, you know. There are decent values in there, hidden beneath all the violence and stupid acts we get in the news.

First, fandom is about equality. It is about people being equal in the ecstasy of victory, in the drunken gloom of defeat, or in their meaningless fist-fights with men from other fandoms. Second, fandom is about togetherness, being a part of the pack. Give me a third or even fourth if you are a fan of anything, but even equality and togetherness alone are enough to cheer up the fandom concept.

Where is art that would celebrate this?

So far, I could find only a single artwork that would not be a mockery or social critique of fans. It is a work by a Latvian sculptor, Olita Abolinya.

I assume this is a group of Soviet soccer fans. Soccer championships in the USSR were taking place in winter because sports were meant to build character rather than entertain.

It’s a good piece. It shows fans in cold weather but the pink clay somehow radiates warmth that the group generates by being connected to each other.

And this is it.

So, if you are an artist and want to sell to the profitable fan community or get over a creative block, look into the fandom good sides.

Show fans resolved to support their team when it lost.

Show a family, in which husband and wife support opposing teams, and do not fight over which club their kids will support when they grow up.

Show fans united not through a goal or win, but through deep understanding of tactics and strategy in football, soccer, hockey, golf, or sack jumping.

It’s all out there, waiting for your talent to crack it.

PS If you are not an artist, but have artist-friends, forward it to them. Make them rich!