Now, if this were true, as some right-wing media claims it to be, would you have at least a modicum of sympathy for anti-immigration rallies and the average Western strongman punching some sense into the unenlightened average refugee?

Don’t stand up indignantly just yet. Social experiments on the rise of fascism have proven that getting a “yes” to my question takes a few days of work in an average US classroom.

Recently, a group of refugees waiting to be transported to Finland from Russia were beaten up by local men for groping Russian girls at a disco. It was hailed nationwide as the right (Russian) way of dealing with the refugee problem.

I am sure a sizeable proportion of Calais residents would cheer up Frenchmen doing the same to the Jungle camp residents.

Vigilante militia and patrols, of course. Easily identifiable by their uniforms and shoulder bands. Strong men would patrol the streets without being slowed down by police regulations. That will order things up.

And next, obviously, a system of identification needs to be set up. Syrians would be required to wear, say, a yellow star. Afgans would be assigned a green one. North Africans… I don’t know, pink? And, of course, how could I forget, before their papers are properly checked, to prevent terrorists entering the EU, they all would have to be detained in some special places, let’s say, temporary migration camps. A simple electical fence, barbed wired, will protect them from justifiably hostile local populations.

If you think a reinvention of the Holocaust is impossible, think again. There’s a generation of people now who are barely aware of the dreadful events taking place more than 70 years ago. Collective human memory is, perhaps, as selective as the individual mind and tends to bury painful moments under the thick blanket of cute cats, X-Factor winners, and loan payment dates.

Alexander Mikhalkovich, a Latvian artist, who describes himself as a web-terrorist, set it his purpose to make people remember the Holocaust.

He inserts Holocaust photographs in web-services such as Foursquare or Google at the exact geo locations where the events depicted took place so that whenever a visitor checks in, they are getting a scene of mass execution or something similar innoculously inserted in the user-generated galleries of splendid views and relaxed passtimes.

This is his statement and some of his work:

I believe that the Latvians have begun to forget about the Holocaust. It is difficult to know about it if you are not interested in this topic specifically. People are often in places where terrible things happened recently, but they do not know it. Finding some terrible photo evidence, I wanted to remind people about the Holocaust in Latvia. I decided to bypass the security systems on popular photo hosting services on maps, such as Google Earth, Panoramio and Foursquare and dilute our usual photoblog of travel photos with examples of Nazi atrocities. On these giants, there is an automated system for testing the photos before making them available to the public. With the help of special programs I changed the GPS data about the location of my smartphone. So I make minor visual changes in the picture, trying to make it invisible to the verification system of copyright. Amazingly, the little Stamp tool – and Google Image (service to search for identical pictures) can no longer find the picture. But the trick of such a giant like Google is not so easy. My photos were uploaded to Google Earth, moderated during two days and as a result were not put in the public domain Perhaps at some stage of the inspection, the robot had suspicions and he sent the photos to the moderation man Because of this, I had to concentrate on Foursquare, because my elaborated algorithm perfectly bypassed secunty of the service. Now I feel like Abba Kovner, a member of the Jewish Avengers; a terrorist group after the war who dreamed of taking revenge on Germany by poisoning the Dresden water supply. I’m a terrorist, but in the name of Memory. I’m invading your world of sunsets, selfies, kittens and happy meals; reminding you of what lies beneath the beach you are lounging on. 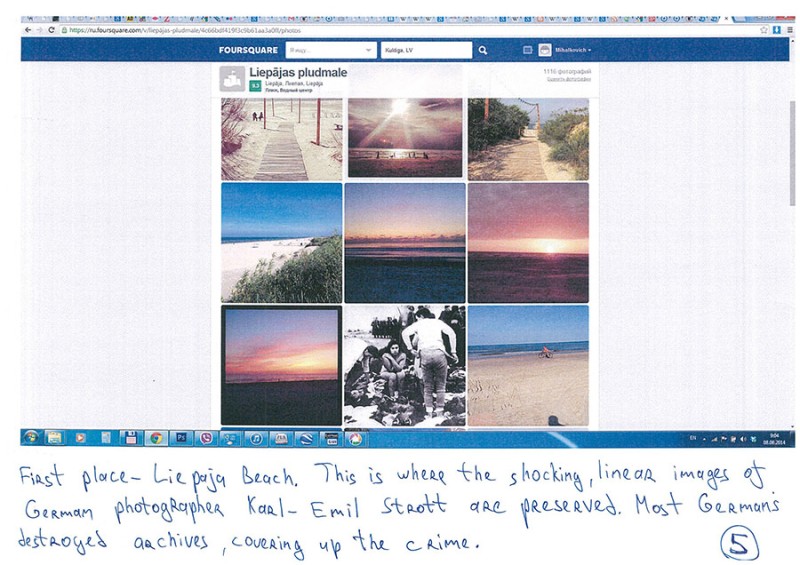 Once, Foursquare commented on a photo of a group of Jewish girls lining up to be executed, “You’ve got gorgeous hair today!”.

This is the kind of digital art that should make the headlines.