Summer Exhibition at the RA in London has always been looked at with contempt by progressive high brow art critics. A mix of realist academicians, amateurs, and no-names concocted with the obvious goal of making a sale – what an insult to the politically erect minds of the politically correct!

Last year, the show was curated by Grayson Perry and got 5 starts all over (you can’t say a bad word about Grayson Perry, a darling of the left and right). But this year, the Guardian critic Jonathan Jones, rolled his review back to a single star with the title “…A moronic monument to British mediocrity”.

This is not true.

There is plenty of great works by artists both known and new, a lot of mediocre works by very talented artists, and some cheap graphics series from big names because big names love fat wads of cash in small notes they get for large editions. Yet, the experience of visiting the show is not like you have to sift a ton of sand to get a speck of gold. It is more like taking large nuggets out of the sieve without really shaking it.

Yes, a large group exhibition like this one mirrors the society more often than not. It shows that people who are well educated, earn above-average money and pay above-average taxes want something on their walls that cheers them up, gives them energy and optimism to keep them going. Is it bad taste to go for a landscape instead of a feminist parody of Lichtenstein with the girl\artist wondering about her right to decide what do to with her body? Keep in mind the landscape was done well and sincerely, while the Lichtenstein homage was made with the too-obvious reason of pressing all the right buttons of the leftist brain. 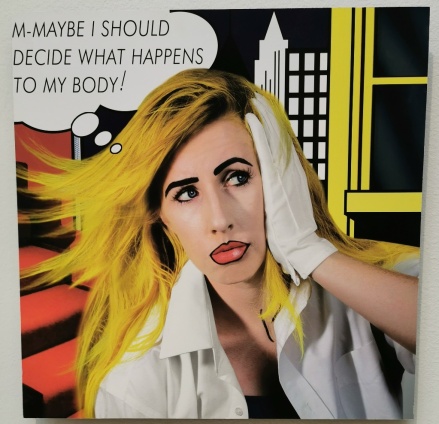 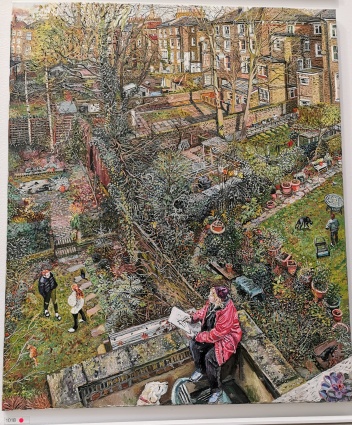 The dilemma of a progressive art critic when covering shows like RA’s Summer is, in fact, about money. If you praise a realistic landscape (priced at £2K for a customer with income around £200K) you can’t possibly justify the sale of a minimalist white square at the neighboring Pace Gallery (hovering above £500K and targeted at an uber rich collector, who ultimately pays for the champagne at exclusive previews). As a progressive, you can applaud realism only when it is politically provocative because it is impossible to address a political issue while staying abstract. The Times can give the show 4 stars out of 5, but not the Guardian.

So, if you are in London, Summer Exhibition at the RA is half a day well spent. Steer clear of the politically motivated stuff (It is the only thing that is mediocre about the show) and approach ladders with caution. This year the show is fixated on the images of ladders and stairs. Perhaps, it is a temporary effect of the unending climb/descent somehow associated with Brexit.

P.S. The top image is a large-scale collage of “street art” and council estate photos. Let’s say, this image speaks volumes to the heart of a Muscovite (me) who’d lived ten years in very similar conditions.