In most cases they are made with the sole purpose of selling them to male customers from developing countries who often happen to have wads of freshly laundered cash, which sculptors would like see changing hands.

These “customers” can afford to buy cocacola-bodied beauties in the flesh, but gradually they realise the looks they are getting from old-money people at Ritz and Ascot are not caused by envy, but are rather zoological in nature. The old money are glancing the nouveau rich up and down as dangerous animals, which can control their basic instincts if fed on time. But, who has not heard of circus lions tearing their tamers to tatters? Money alone can buy faked respect of a doorman for the fleeting moment of swinging the door open. But it ends there. What can be done?

Art is the answer.

Art dealers rush to the rescue, for art is viewed as a latch on the gates to the elite status. Billionaires are sold “big names” (made into “names” by the same curators the super-rich hire to help them look educated connoisseurs), millionaires fall for sculptures of beautiful young women. Those sad micro-oligarchs who can’t afford their personal curator see them as the key to the gates of higher society, because they believe everyone loves beautiful young women in the flesh.

Note to artists: if you produce beautiful young women, price them below $5K. You sell to millionaires, not to Roman Abramovich!

The result is usually something sexy, bronze, in an artfully sculpted wet t-shirt, taking on a sexy pose. There are life-sized plastic alternatives, of course. In short, it is pure pornography of the soul.

There is no drama, no conflict in a sculpture of a beautiful young woman, even if she’s sculpted as someone who is in desperate need of sexual intercourse right here and now, because that’s something she’ll be getting in a moment. She’s so sexy she can raise the dead, so finding a suitable male is not a problem for her.

But there is one special case that I like, and this is a case of outdoors, sea, and cactuses.

Eze is a village in the South of France. I think it is pronounced as “Ez”. It sits on a mountain and boasts a premium hotel, a Michelin restaurant and a garden of cactuses sprawling over the slope that faces the sea.

“You’re as beautiful as a cactus flower”

The last slope you want to tumble down

Green, blue and orange. A difficult combination to look natural 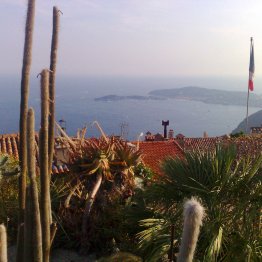 Some cactuses are very phallic

Now that you’ve seen the garden, it is time to see the girls that are strategically positioned there. The pics are worth clicking on, trust me. 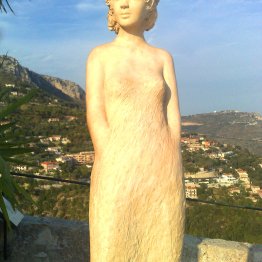 Showing off her body 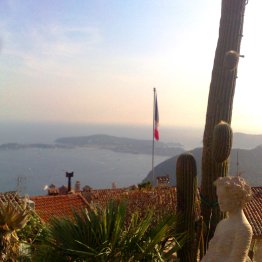 Yes, it is phallic. I know, thank you.

Why do these girls – very ordinary sculptures were they put into gallery space – become interesting art in this natural setting?

Because they produce a very real conflict between what you do there (you trudge the garden’s steep steps, sweating in the body and planning dinner, next stop, and the road ahead in the mind) and what you want to do (you want to relax watching the sea, turning your face to the sun, thinking deep and novel thoughts about the fate of man, the role of art, and NOT coming back to what you call day-time job). The conflict is not in the sculptures themselves, it is in the viewer’s mind only. Which is not a bad thing at all, as long as you don’t buy the sandstone girls (you’d have to buy the cactus garden for the girls to stay art, and what will you do with the garden then?)