In my yesterday’s post, I was talking about this dramatic landscape by Ivan Shishkin, that he “invented” to represent the depression he suffered through because of the death of his young wife in a year after their marriage.

I asked three questions at the end:

My amazing readers (Olga Brajnović and Anna, ) came back with insightful answers – thank you! As usual, I doctored the image to explain Shishkin’s methods.

Shishkin uses dark “markers” proportioned and positioned in a way that the eye is following. I’ve marked a few in this picture to better illustrate the concept.

It is important to paint those markers in a way that would not be too obvious. A casual observer won’t realise the markers are there until they are pointed out.

To understand the vertical rhythm, I’ve maxed out contrast in this picture.

I am sure you can see the trick without any help now, but still: 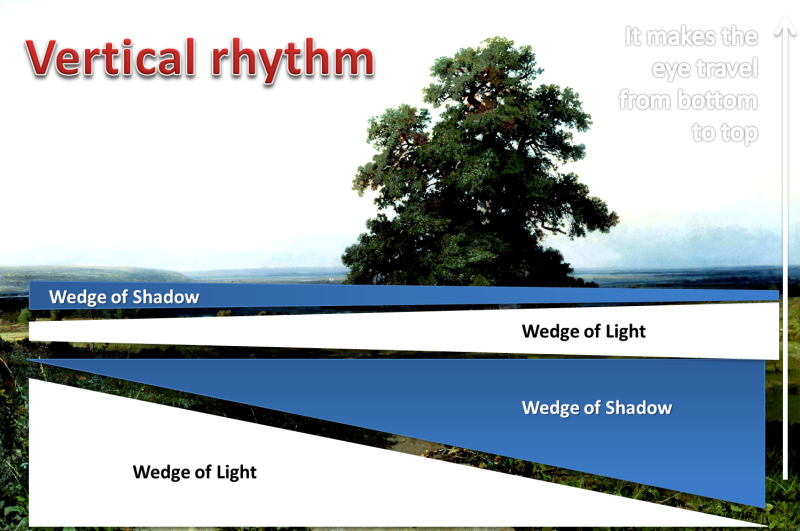 Shishkin uses interchanging wedges of light and shadow that thin out towards the horizon to create the vertical rhythm and depth.

The play of light and shadow on a relatively flat surface of the plain is justified by the skies, with its own wedges of clouds and clear skies (to better see it, I’ve killed brightness in this picture):

And these are the wedges that get “reflected” on the ground:

It is not enough to know the compositional trick, for the choice of colour value, its intensity is just as important. A less gifted artist would make this composition too obvious, and hence less believable.

Most landscape artists in the 19th century used to paint something notably beautiful at the foreground, to whet viewers’ appetite for watching and studying their painting. It would look theatrical and untrue, just like in this typical work of a Dutch artist:

The plants at the foreground of Shishkin’s painting are NOT beautified in any way. In fact, he makes some of them quite withered, and thus opposed to the oak, which is lonely but full of green vitality.

This group of plants represents blooming, withering and dying, and is linked to the artist’s emotional state as well. The road that leads nowhere and disappears in the folds of the ground is the main symbol of Shishkin’s disorientation, a simple representation of the feeling of being lost.