First-year students of art schools across the globe sweat out drawing pots until they get potty in the head. Pots are boring but they help students understand different forms, weights and shadows along with the spatial relationship of simple objects. Artists-to-be can use this knowledge in the future to crate more complex compositions in more sophisticated genres than still-life bowls and bottles.

It was Giorgio Morandi (Italy) who raised pots and bottles to the level of a philosophical essay on human condition. 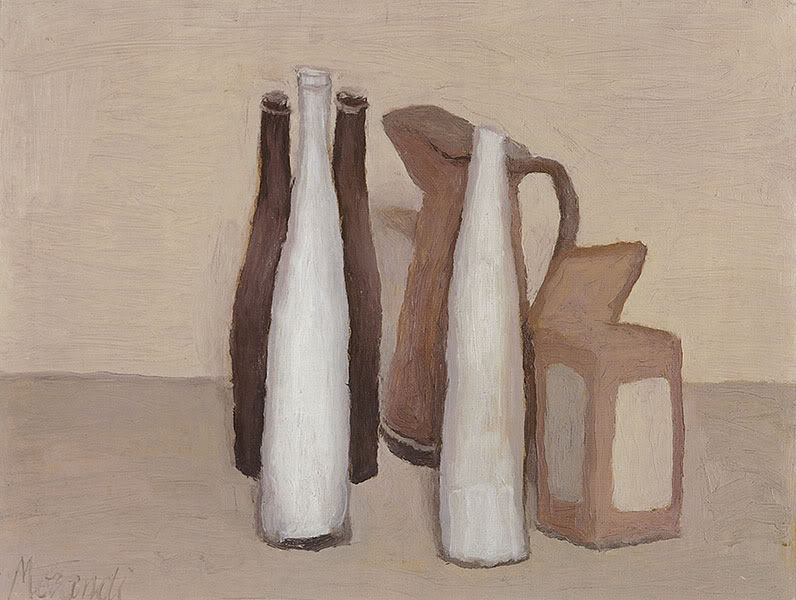 This is one of his works from the 50s. Think of these objects as personalities. It is easy to imagine them as people.

The white bottle to the left, flanked by two black bodyguards or footmen (who are fit, lean, and trying to emulate their boss in all possible ways, while staying in his shadow), is in a clear opposition to the diverse group to the right. Look closer at the irregularity of the white boss-bottle shape: it seems to bulge out its breast a bit towards the other white bottle,

The other white bottle who seems to be singled out from the group to the right by the boss-bottle is of the same colour as the white boss, albeit slightly more yellowish. There’s more variety in this guy. There are more different tones on his white surface. This implies a more complicated personality. Its left side is a tiny bit concave, indicating the boss-bottle has had an impact with its bulging posture.

The box with its lid flapped open and the beaked jug (the other white bottle’s friends or, perhaps, just people on the same side of the street), seem to be brownish commoners, who lack the clear colours and glamour of the sophisticated bottles to the left. The Jug is especially interesting. He’s obviously more durable, and, frankly, more useful than all the bottles, but somehow he’s not beautiful enough to stand at the front. He’s got that rugged character of a simple man, but a man one can trust. He may not be cute, but he lowers his beak before no one.

You see, it is increasingly difficult to refer to the objects as “it”.

Any of Morandi’s “simple” still lifes represents a sociological or anthropological study. He was far too clever to be painting still lifes for the sake of the “poetry of shapes, colours, and forms”. I cringe when art critics insult his intelligence writing, “Taken one by one, the paintings are close studies in rhythm and balance. When they are seen in series, intricate rhyme schemes surface as objects change shape, placement and chromatic tone from picture to picture while keeping their basic identity.”  Morandi’s paintings are so much more!

Any of Morandi’s still lifes can be played with in a number of ways.

This is one of them: what the boss-bottle says, what the other white bottle answers, and what the box thinks along the way. Remember, the text must match the logic of shapes, colours, and the way the objects are positioned relative to each other! The box is hiding behind, the jug is neither hiding nor willing to be noticed, though it understands it can’t remain unseen (years of heavy beer consumption can’t be easily hidden, can they?). 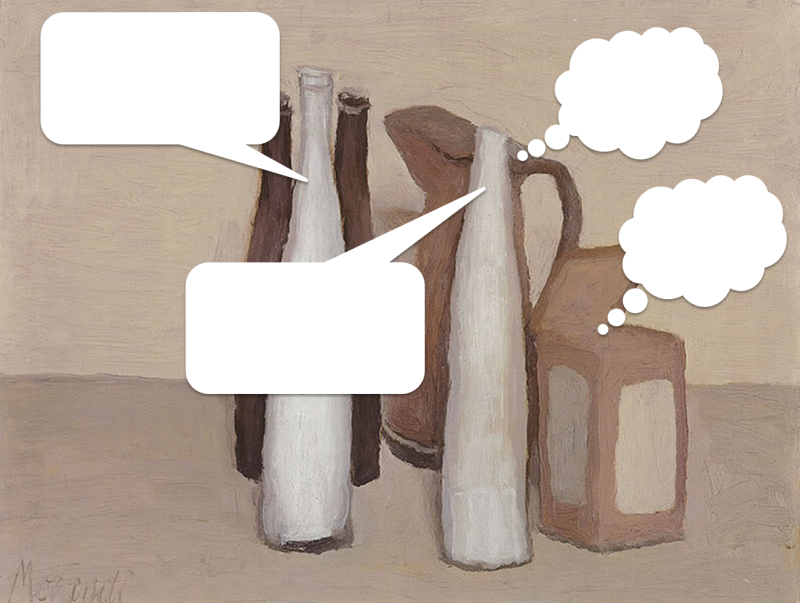 You can print out a Morandi, draw the bubbles and then play this game with your friends, family, and strangers in a pub.

Psychologists call it a projection exercise that allows to surface up hidden motivations of the person who plays the game. So, be prepared for the Unexpected.

In my next post, I will continue talking about the Aesopian language of still lifes that Soviet artists learned to use. Two of them reached new (and very different) highs in this genre. To give you a taste of what I will be talking about, I am showcasing two works right now: 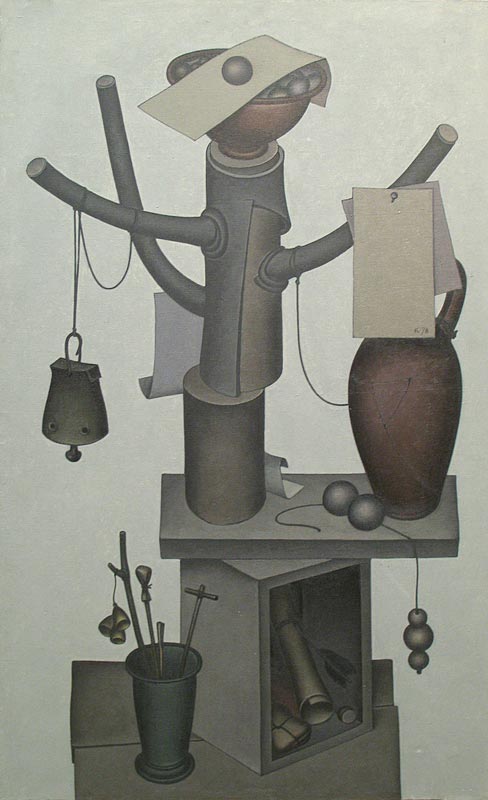 In the meantime, you may want to practice the projective game with Morandi. Please, share your dialogues with me!