Sports in the Soviet Union used to be a fight promoting the Big Idea of Communism. As a kid, I was certain a communist man was better than a capitalist one, both morally and physically.

Look at these optimistic runners by Alexander Deineka, a chief realist painter in the Soviet Union. What a happy bunch of athletes! They sport breasts, thighs and bottoms of the same attractive sizes – and all this sex appeal is coming toward and past the viewer, creating a tidal wave of emotional response in men, who never fail to register the absence of bras. As observers stand in front of this painting, the wind from the runners brushes their faces, tickling their noses with the smell of sweat, set midst the endless rolling expanse of Soviet Socialist nature. A new dawn, a brave new world, a bright future devoid of the trappings and shackles, and certainly the underwear, of corrupted and polluting capitalism.

Of course they were.

Until I realised the Deineka girls were fake. Which happened about the time the Big Idea of the Just Communist Society turned out to be a bluff.

In the real sports, that superiority idea was just as bad as having a mosquito tattooed on your shoulder. Unsuspecting nations wanted to slap Russia all the time, thinking they were, in fact, helping. Russians would kick back. The already suspecting nations would retaliate with more force. And a full-blown anabolic-fueled battle would ensue. That was sports back then.

Today, Russian authorities try to push the same agenda, but there’s no big idea to ground it on, except Russia’s historic predestination to uphold the virtuous heterosexuality of Mankind.

However, that’s not a fool-proof pedestal to mount the New Russian Athlete on. What if he/she comes out as, you know, “deviant”? What if he/she wins?! imagine Putin having to shake hands with someone whose heart – according to the Russian Goebbels (Dmitry Kiselev) – shall be burned. Shame.

No big idea – no mouth-foamed zealots.

Indeed, believers in the Russian uber-might are now few and comical. Consumerism has become the true religion of modern Russia just as everywhere else. The L’Oreal Generation puts money and sex in the front row (“because you’re worth it”). Today, Russkies are more famous for their extravagant parties in St. Tropez rather than ballet or chess, unless, of course a ballet director is assassinated or a former chess champion is busted at a street protest in Moscow.

Eventually, art mirroring the modern Russia’s view on sports and itself must have been created by someone.

This is the equation:

This is the result by Andrew Tarusov (some of the translations are awkward, but in Russian they rhyme OK): 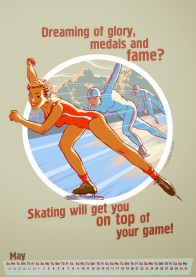 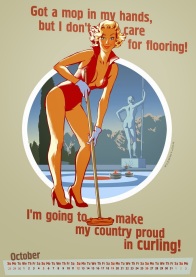 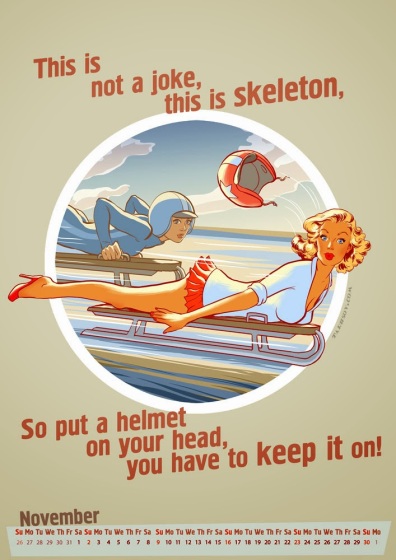 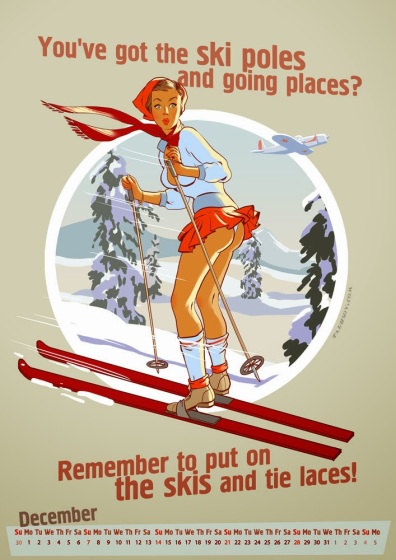 Pinning this calendar up an office wall may not be a good idea in countries where sexual harassment is frowned upon, but the girl is obviously over 18, so it must be OK to have the images stored on a personal computer.

Now, if you made it this far, there’s a bonus.

Will you sync your google calendars? Will you create a joint account on Facebook? Will you keep creating content for your family website until death do part you? You are now husband and wife. Exchange your social network passwords.

What exactly were you doing at 7:30 pm on January 28, 2001? – I was sitting in my chair holding a calendar and watching the clock on the wall, of course.

When the Maya Calendar came to an end, the calendar of Junea began.

Wall calendars at the office are needed to perfect counting black days until the red ones.

“Good Morning” is when it is 1 pm on the clock, Saturday on the calendar, and an ocean view from the window.

Asking a girl who she is according to the Chinese Calendar can help the man establish her age without asking it directly. The margin of error is plus or minus 12 years.

You understand you overstayed your welcome when the hostess begins to look up – every now and then – at the wall calendar rather than the wall clock.

First time visiting this blog? To sample it, click on About at the top. It has links to some of my best or typical posts. There’s an Art & Fun shelf if you feel like in need of a laugh.