Ideas have immense power over people.

I know an antique dealer who’d kill a customer for saying, “Oh, what a great baroque piece!” while pointing at a gothic chest of drawers. The guy believes dating is sacred. No wonder he’s single: his attempts at the other kind of dating failed because women he met were attributing themselves to a different epoch. You don’t discount 42 to 35 in front of a man whose profession is about pinning a proper age tag onto the object he is about to acquire.

I also know a president, who believes his country is surrounded by enemies, which can’t sleep properly until his motherland is destroyed. Wolves of evil circle the clearing, waiting for the lonely pilgrim to nod off. So he sets fire around his camp torching up all the surrounding countries, and shoots at the firemen coming to the rescue, taking them for the Hounds of Hell that lurk in the fiery darkness.

You’d say it is not rational, and hence unlikely. One of the firemen would shout out for the pilgrim to stop shooting. I am sure one of them will. But if you are certain they are the proverbial Hounds of Hell, you’d just murmur, “No, you devilish creatures, I can see through your foul tricks!” and keep shooting. It is not about what’s real or true and what’s not. It is all about beliefs. Irrational behaviour in otherwise normal people is just as common as rational actions of complete psychos.

If you are convinced that Anglo-Saxons and Zionists conspire to turn Russia into a failed state (which is the prevalent theory in Russia right now), Russian politics start making sense.

The problem is that Russian politics are represented by very real tanks, soldiers, and nukes.

Today, we witness the Russian belief in a global conspiracy against it materialising into a self-fulfilling prophecy. Even if originally it was a figment of Putin’s imagination, it becomes real as the world watches Putin’s actions. Other nations start thinking they indeed would be better off with Russia in a restraint jacket.

Is there a way out of it? No one wants a war, bloodshed, shelling, refugees, and sanctioned poverty. Surely, everyone has good intentions, including the Russian President.

In a situation like that, good intentions help as much as a bullet-proof vest on board of a sinking ship.

That’s how it works.

Imagine a bear wanders into a hunter’s lodge in search for food.

A half-naked hunter barely escapes, slipping out through a small window at the back. He picks up his rifle at the last moment. He then buttresses the door from the outside with a log, and makes a 911 call.

The call is received by an operator who is incidentally a PETA activist, and before she calls a team from the nearest zoo, she makes sure a group of her fellow PETA members is on site to prevent any harm that may come the bear’s way.

The bear is barricaded inside the lodge, and PETA activists create a shield around the hut, waiting for the arrival of a suitable transport to take the bear to a safe location in the forest. 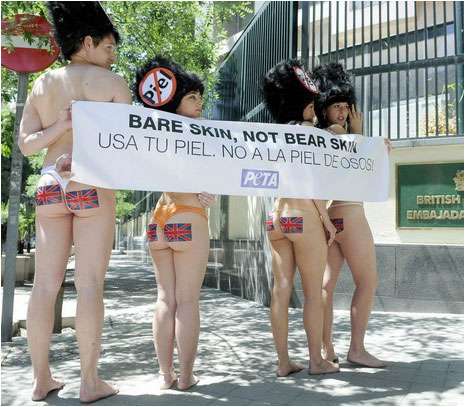 The bear sees a crowd of people outside. They are very loud and aggressive, chanting something about bears, hunters, and fur hats (here the bear shudders) in hysterical voices. The bear’s best guess is that it is going to be killed. Hunters are known to have killed bears before, you know, so in human terms, it is an educated guess. The bear wants to find a way out of the wooden hut and run, run, run back to the forest: any bear knows it is dumb to confront an army.

After an hour of thrashing around, the bear is seconds away from ripping the door off its hinges and storming outside.

There’s no gun with a sedative bullet yet, just a regular one.

The hunter wants to train his rifle on the door to catch the bear disoriented when it emerges from the lodge. He knows there would be no second chance to create the first impression with a bear that size.

PETA activists shout that a pointed rifle may provoke the bear to assault people, and that it is better to throw out the gun altogether, because the bear would simply run off to the woods.

Now, add to the scene a bear cub that was discovered by PETA activists outside the lodge. It is a cute fluffy ball of fur, and very hungry. One of the activists takes a bottle of milk to feed the poor creature. The father-bear sees a human grabbing the cub and realises one of the cubs has been following its father to the lodge. The scary thought “They gonna take my son!” flashes through the bear’s mind.

The bear doubles up its efforts to break out.

The hunter cocks up his rifle.

PETA activists keep shouting at the hunter to lower the gun.

They all, including the bear, mean frigging well and are behaving noble-mindedly, god after all being on their side.

As the bear comes out with the door turned into flying shrapnel splinters, the hunter pulls the trigger, trying not to hurt a PETA activist, and… just wounds the animal. Wounded bear massacres activists, with the first to be ripped open being the one feeding the cub. Then the bear goes for the hunter. No one can outrun a wounded bear.

When the police arrive at the scene (which they see as a massacre site), they aim for the head and finish the bear with a dozen accurate shots.

That’s when they see a zoo van pulling in.

Oh, the important detail: the hunter was out there in the forest on a fishing trip, originally.

You may think it is now irrelevant, until you realise it was the surviving fish that benefited in this conflict, ultimately.

Now think of the bear cub as Ukraine.

Think of PETA activists, protesting that the gun is trained on the door, as Western “lefties” (that’s not difficult to imagine at all).

Think of the hunter as Western “righties”.

The bear itself is, well, Russia.

There’s no police within a thousand light-years.

The fish is somewhere in China.

The time is now.

What are the chances that the zoo van pulls in before the bear is out of the lodge?

Could the whole mess be avoided?

Yes, and here’s my manifesto on crisis avoidance strategy:

a) Avoid people who want to impose their ideas on others. They are well-meaning bears.

(b) Make sure your bear is fed, whatever or whoever it is. If it is not your bear, install electric fence.

(d) Shoot to solve the problem, not aggravate it

(e) If you can’t solve the problem, hide to not become a part of it

If (b) to (e) failed, RUN or put on a Justin Bieber song, or find its equivalent.

P.S. No bears, hunters, or PETA activists suffered while this post was being written, but some people actually died in Ukraine, Iraq, and Syria, which means the bear is not necessarily Russia, and the fish is not always in China. And no, I am not feeling light-hearted about it.