I was showing some clever public art in “Summer art. Part I“, and today we are having the type of public art that’s great for selfie backgrounds.

What you see above is a multi-figure installation in Florence. I flipped it over. The figures are not walking along the ridge, they are crawling up the side of a house. This installation is going to be the hit of the year, especially on Facebook or Instagram.

And it was impactful. Walk through this gallery to understand why there were more people with mouths gaping than shut in that street. 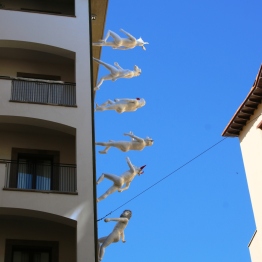 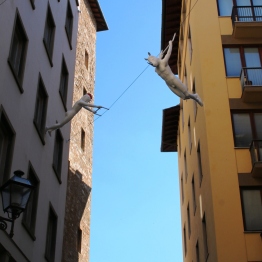 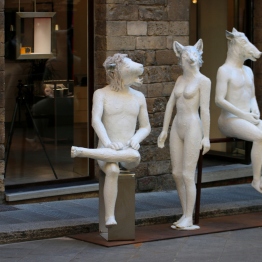 This installation celebrates the recent opening of a a boutique art hotel owned by the Ferrogama family. The creator of the anthropomorphic world is the same guy who designed the hotel.

The artist said he was inspired by the Medicis, and by Cosimo I, in particular.

This Medici ruler was often represented by a turtle (prudence) in the combination with a sail (action), and that’s the way he went down in history. As most medieval Italian princes or dukes he never hesitated to have an individual opponent killed, an opposing city drowned in blood, and would bleed his own subjects with impossible taxes to splash on arts in general, and Benvenuto Cellini, in particular. He left us the Uffizi building though.

The jolly good idea that people were/are/love to be/can be represented by animals has been around since the first fantasy writers in Ancient Egypt invented Anubis and Seth. Intellectually, the topic has been sealed tight by Ninja Turtles.

Yet, the way the figures are scattered around does make one stop and look around. You don’t see figures scaling walls very often these days.

Anything that’s (a) unusual and (b) static is bound to become a background for people posing for photos against it, as if to illustrate that unlike “fear”, or “surprise”, “DUMB” can be represented by a stunning variety of facial expressions. One can easily imagine what was the most favourite pose to be photographed at the starting point of this queueing group of figures:

if I were a local teenager, and needed an extra euro, I’d be renting head masks of animals to people who want to get photographed crouching at the bottom there. I estimate I could make a 1000€ a day. If there’s anyone from Florence reading this, guys, it’s not too late to start. In August it can go up to a couple grand a day!