Branding public art (or any art) great, not so great, and poor is a dangerous territory, unless you are a fast runner. Sculptors are usually people with strong arms, heavy tools, and short tempers.

I’d rather divide it along the lines of “public art that makes people think or feel something new”, and “public art that is an entertaining background for taking selfies and/or great meeting point landmarks”.

My preference is the first type of public art, but I have nothing against the latter type. I am simply not good enough at taking selfies. As landmarks, public art is invaluable: millions would be lost in the jungle of cities without the Eros in Piccadilly or the Bull in Manhattan.

So, this summer’s catalogue has two chapters in it, and today I am going to show what I liked from the “thinking|feeling art” category, saving the background art for my next post.

Very often. it is not so much the sculpture itself, but its context that makes it an interesting work of art.

At first this kneeling figure does not appear striking:

But when it is poised against the church gates, and the colour of the shirt is rhyming with the gate, the context makes you think something else. 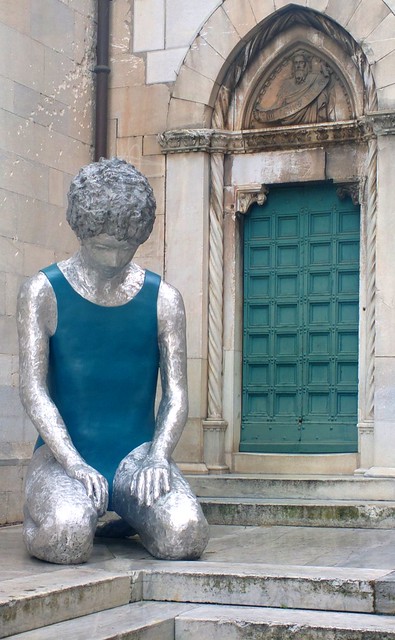 The same could be said about this Eve by Botero. The guy is so popular someone even stole the tag from the plinth.

It could be another one of his Eves-with-an-apple, but as she looks down the main trading street that opens into the square with the main cathedral behind her, thoughts about the modern versions of cardinal sins may start bouncing inside a head or two.

As Botero is one of the most recognised sculptors around the globe, the tag is, indeed, superfluous. Even if you are not into sculpture, you must have bumped into one of his voluptuous girls, men, or sparrows.

And this is his sparrow that is believed to represent the species feeding off a McDonald’s joint:

About a dozen steps away from the Eve, Sophia Vari, Botero’s wife (also a sculptor) shows her Fruits of the Night. 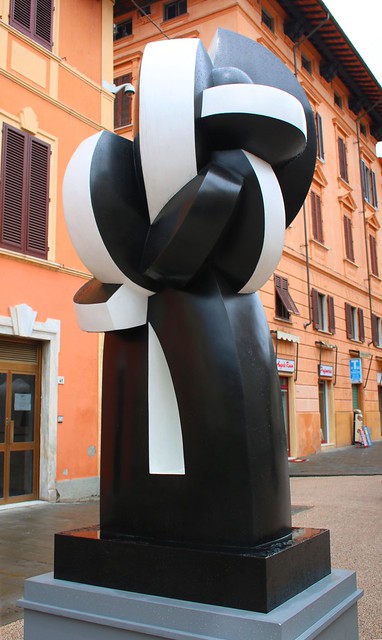 Now, a lot of what Sophia Vari produces is like that. To me, she represents an interesting trend in modern sculpture: glamorising achievements of great artists in a way that a semi-literate oligarch would buy it. You won’t be surprised to learn that she’s based in Monaco.

Compare these best known pieces from Vari with Henri Etienne-Martin and Alicia Penalba:

I am not saying that processing revolutionary ideas of the past into glamourised souvenirs of the present is necessarily a bad thing. As a Soviet poet once said, “we need a variety of people with a variety of important skills”. He was referring to building socialism, but building capitalism is no different.

One of my all time favourite “Penalbas” is this Grand Dialogue from Martigny in Switzerland, which I had a chance to enjoy live this summer:

Makes one think of “we-need-to-talk” situations, doesn’t it?

It makes me think of tension at its zenith, just before the sparks start flying around with shards of what used to be porcelain plates before the dialogue began. It doesn’t matter if you think like me or have your own vision: this abstract piece creates a universe of meanings from which everyone can draw their own interpretations.

A Etienne-Martin work, from the same place as the Grand Dialogue, made in 1947:

This was Etienne-Martin’s first step towards the geometrical abstractions that he became famous for in the 70s (the small pic above). For me, it is an example of how the concept of love, being together, and sex can be convincingly rendered in a non-vulgar way.

The background type of public art that comes next is much more fun, so stay tuned!