Rembrandt is more often compared to writers than painters. He has been likened to Shakespeare in England and Dostoyevsky in Russia for his explores of human character under extreme strain and stress, be it a brush with death or burial under cornucopia’s gifts. That might be true, but for me he is more of a philosopher with prophetic insights into the social order that would flourish many centuries later.

He craved for recognition when he was young, and for money, when he got recognised and bankrupt. At the time, group portraits were as good a commission in the protestant Amsterdam as an altarpiece in Rome, so the order from the Textile Guild was a godsend. 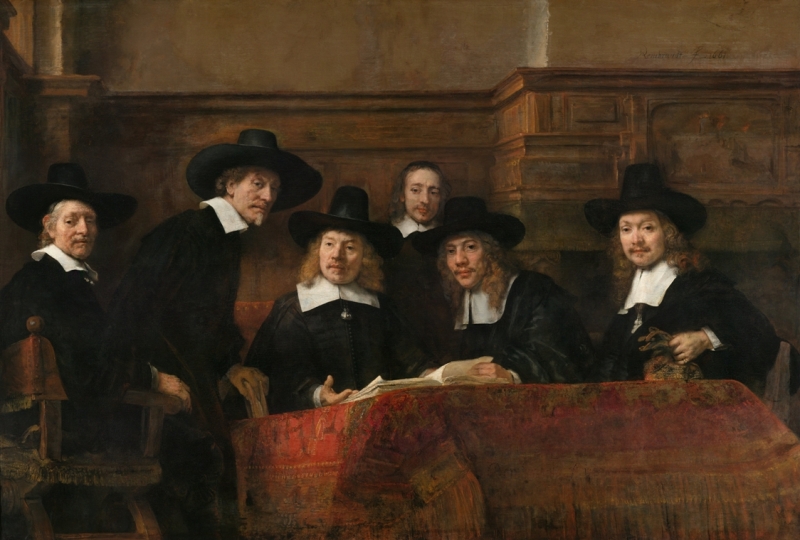 This is a group portrait of the so-called syndics of the cloth merchants’ guild, or people who ruled the textile trade in the Netherlands, using the subtle tools of quality control. They were a powerful group intricately linked to the Republican government that, at the outset, allowed them to oust British textile makers from the market, and at the end, let them exercise a lot of control over the government itself. I can easily see a modern EU bureaucrat in this role.

The first impression from this painting is that the syndics have assembled for their regular meeting. No. Syndics were never getting together for meetings or board presentations. Each of them was elected for one year, and had to come three times a week to the guild hall, one by one, to certify the quality of fabrics presented for inspection. I guess that saved a lot of budget: something modern EU commissions might like to copy. Each syndic paid for his own portrait within this group, as was the custom, so Rembrandt, having learned his lesson from the Nightwatch the hard way (when some of the unfavourably portrayed watch members declined to cash up), gave each of them the representation beyond what they deserved, or could even hope for.

To put it simply, Rembrandt created a portrait of the utopian corporate board. You don’t see such boards in the real life, but each board hopes to be as close to this ideal as possible.

Three of the syndics are watching you, the observer, with the other two eyeing up something to the left of you. If you look at the way the figures are lit, you’d realise it is not the light coming from the window on the left, it must be some large opening, like a big door that you’d left open when you entered.

Now, how does the board react to you and your news, idea, or proposal?

Each of the board members has his own “character”:

They are all different, but Rembrandt makes them united by grouping them around the table that gives off welcoming red warmth as if a fireplace, and by horizontal lines in the wood panelling.

Each of them brings in an ingredient without which a corporation is likely to collapse, but with all of them together, it is destined to prosper. Why? Because it reacts to challenges both effectively and efficiently, just as a management textbook of the 21st century would prescribe:

The only problem is that such boards do not exist: stupidity, and greed inevitably get in the way.