…but everyone knows what she had to go through. A perfect portrait opportunity, isn’t it? No limits to imagination with very few restrictions, like a small mouth and big eyes (for it is the mouth that lets sin inside our bodies, and thanks to the eyes we can check just how sinful is that chocolate cake that we are about to put into our mouth).

Many cultures in the Christian world have their own relationship with the Blessed Virgin.

In Russia, the most famous icon is the Vladimir Virgin, believed to be a copy from the original painted by St.Luke himself. It is often used a symbol of Russian culture, even though it was made in Constantinople by a Greek artist.

In the 12th century, a Russian prince stole it from a nunnery. The icon had developed a habit of giving him assignments, and he obeyed all its commands unconditionally. Today, the prince would be locked up as a schizophrenic patient, but the Church raised him to sainthood.

The icon is a great work of art, convincingly showing the sorrow of a mother who knows her son is destined to sacrifice his life.

She’s not looking at the observer, she stares at nothing and everything. Today, this inward-directed look gives away an experienced yoga practitioner in the thickest of crowds.

It has become a symbol of the humble acceptance of the necessary evil for a greater good  (which Russians, who call the whole affair “sacrifice”, are so famous for). A fragment of the icon is also the logo of Icon Productions, a Mel Gibson company that gave the world the Braveheart, What Women Want, and the Passions of Christ, heavily criticised by the Church and banned in orthodox countries.

In Mexico, the Virgin of Guadalupe is at the foundation of national identity. 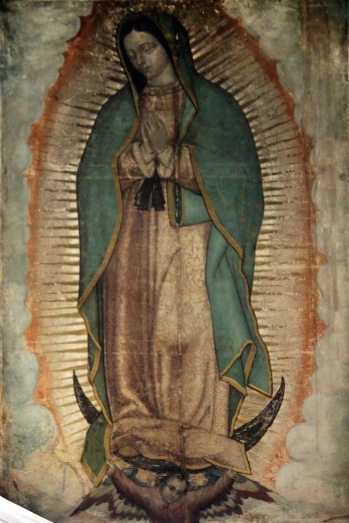 It appeared as a print on the robe of a peasant which the said peasant used to collect roses from the place where the Virgin’s apparition wanted a church to be built.

The peasant had effectively become an errand boy between the Virgin and the local bishop, until the bishop got convinced the peasant was not a fraud. Why the Virgin could not appear directly in front of the bishop and command him to build the church is beyond me.

The cathedral where the robe is shown behind a bullet-proof glass is the largest and most visited church on earth. The peasant was promoted to sainthood, of course, even though it is dubious he’s ever existed.

As a work of art, it is said to be a good example of the 15th-century colonial style.

Having learned the story of this painting, I can appreciate the Mexican infatuation with soap operas titled “Sugarcane Field of Passions” or “Don Darveio’s Secret” (though not the telenovelas themselves).

I am sure that the moment I started writing about the Virgin’s representation, most readers thought of Italy, and Raphael. Da Vinci is more known for his real women than Madonnas, and Lippi with his pupil Botticelli were more about representing women they loved than the celestial ideal, so…yes, it’s Raphael who comes up first on all google searches.

That may well be debatable, but there’s one Italian Madonna I fell in love with this summer.

It is a board painted by Ambrogio Lorenzetti in 1324-25, and rarely seen outside of the chambers of the Archbishop palace in Siena, and – by the shape of it – possibly a part of a larger altarpiece.

It’s an incredibly revolutionary image for the 14th century. Its graphical and colour solution is very modern. The Virgin is set off centre to show the heaviness of the child: a very real burden, as the position of her right hand indicates. Her clothes are rendered by flat areas of colour – it is the child that’s rendered in a more 3D manner, implying volume, and mass.

I’d say it again, the colour solution is just unbelievable. Look at the way the boy stands out against his mother via the contrasts of colours used to show his skin, the Virgin’s clothes, and his own pink diaper cloth. He stands out, but remains united with his mother at the same time. The unity is achieved compositionally via this circle:

Look at the dark lower part of the painting. The darkness is created by the Virgin’s cloak, but it also creates the impression that she is holding her son above an abyss.

The boy holds on to his mum’s tit as if he would be holding on to dear life, and look at the white scarf painted in such a way that it becomes more than just a symbol of purity. It’s pure milk, flowing from the Mother to the Child.

The compositional circle above makes this painting so much more than a representation of the Virgin. It is a clever essay on life and love, and all the things the latter entails and brings about.

Do you have your own favourite Madonna? Tell me!