But ask men about being helpless and their romantic tales would turn out to be remarkably different.

Being helpless in the face of something you didn’t purposefully cause, like unrequited love, is one thing. Being a helpless idiot and facing the consequences of your own romantic deeds, like texting a very wrong person about your feelings, is quite another.

We feel sorry for the former (“Poor guy”), and sneer at the latter (“Friggin’ idiot”) in dramas and comedies, respectively.

The icon of the poor-guy type of helplessness and the resulting out-and-out gloom (what today is often diagnosed as depression) was created by Mikhail Vrubel in 1890 and is called the Seated Demon. 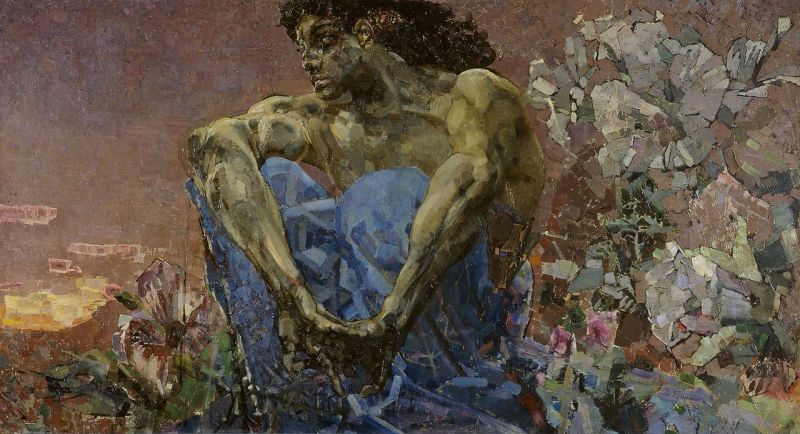 Originally, it was an illustration to the eponymous Lermontov’s poem, in which the Demon falls in love with a mortal girl. This, as you and I understand, is a hopeless affair: everyone knows angels do not have sexual organs, and a fallen angel doesn’t grow a penis after his fall: unlike socially responsible employers gods don’t award bonuses when they kick you out.

Anyway, this is a great painting that came to symbolise a lot of things Vrubel had never intended. He explicitly wanted to paint a powerful spiritual being that wasn’t so much evil as suffering. Today, it is seen as an icon of helplessness in the face of fate, consumerism, and selfie sticks. Yes, for some reason girls love taking their pictures in front of it. Is it because they enjoy it when strong and attractive men are helpless?

Some experts believe an alternative explanation for the selfie epidemic is trite but true: girls don’t care about the meaning of the painting. They see it as a nice backdrop to their own splendid image.

The Demon is the Poor Guy we all feel sorry for, and as time goes by, the image remains quite contemporary: an office clerk. honest and capable, but laid off due to an economic downturn, can very much sympathise with this painting, even though his situation is, perhaps, the last thing Vrubel could have imagined.

The Helpless Idiot icon can also be found in Russia, though originally it was created by a foreigner.

It is the statue of Orpheus by Antonio Canova, a neoclassical sculptor from Italy. The English must love him for the same reason the Greeks should hate him. His recommendation was the decisive last drop in acquiring the Parthenon marbles.

According to Greek myths, Orpheus was a great poet, singer and composer. One day, his beloved wife Eurydice died from a viper’s bite.  Given that “1000 Ways to Kill a Mortal: from Mildly Sadistic to Uber Cruel” had been the all-time bestselling manual on Mount Olympus ever since Zeus’ father took to eating his children (and until it was replaced by Fifty Shades of Grey), a viper’s bite was not the worst way to go.

Regardless, grief-stricken Orpheus began composing and performing tunes of such grandiose sadness that even rabbits were weeping instead of making more rabbits. Eventually, local gods, nymphs, and neighbouring people conspired on sending Orpheus on a tour of the underworld, the only 100% sound-proof place in the known universe, in search of his diseased wife. The sad singer travelled there,  and performed for the underworld’s ruling couple, Hades and Persephone.

The legend says Orpheus softened their hearts, and they allowed him to take his wife back to the surface. The true story was that the concepts of hell and tormenting the dead had not been invented yet, and Hades couldn’t imagine why his subjects should be suffering more than they were suffering already, what with already being dead, yeah? Also, he couldn’t revive the dead, despite all the rumours to the contrary. So, Hades made a deal with the singer, that he could take his wife to the upper world only if he came first, she followed him, and he never looked back until he came out of the underworld. Otherwise, the girl would be lost to Orpheus forever, which would be his own fault this time around.

The Bible then borrowed the story, with God turning Lot’s wife into a salt statue when she looked back at the destruction of Sodom. Curiosity, impatience, and peep-show addiction are sinful in most religions.

A special notice to police personnel working speed cameras:  you understand you are damned, don’t you?

Of course, Orpheus looked back, because romantic men always do, and just as certainly, his wife was pulled back into the underworld. This is the moment that Canova sculpted for the Russian Empress more than 200 years ago: 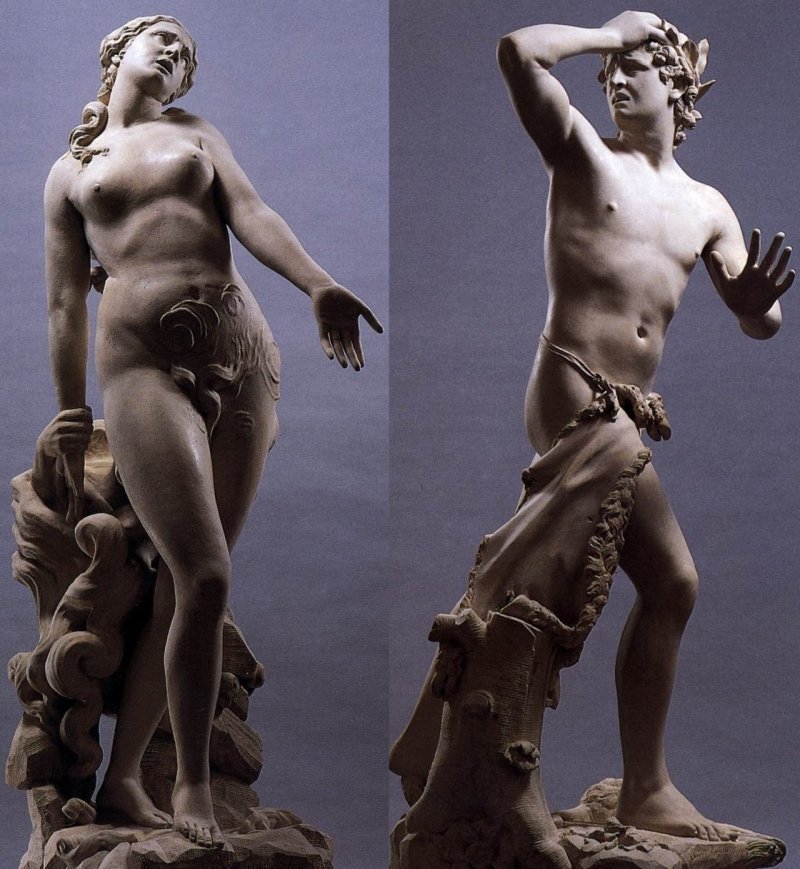 Hades’ brilliant idea was to shift responsibility to Orpheus because guilt would prevent him from both (a) coming back to the underworld and (b) depressive singing in the upper world. Since then, this guilt trick has become a popular tool in male-female relationship management.

Having made a helpless idiot of out himself, Orpheus vowed to never touch a woman. This dramatic story could end right there and then with a strong moral message to everyone’s satisfaction, but no, ancient Greeks were never happy with straightforward plots. 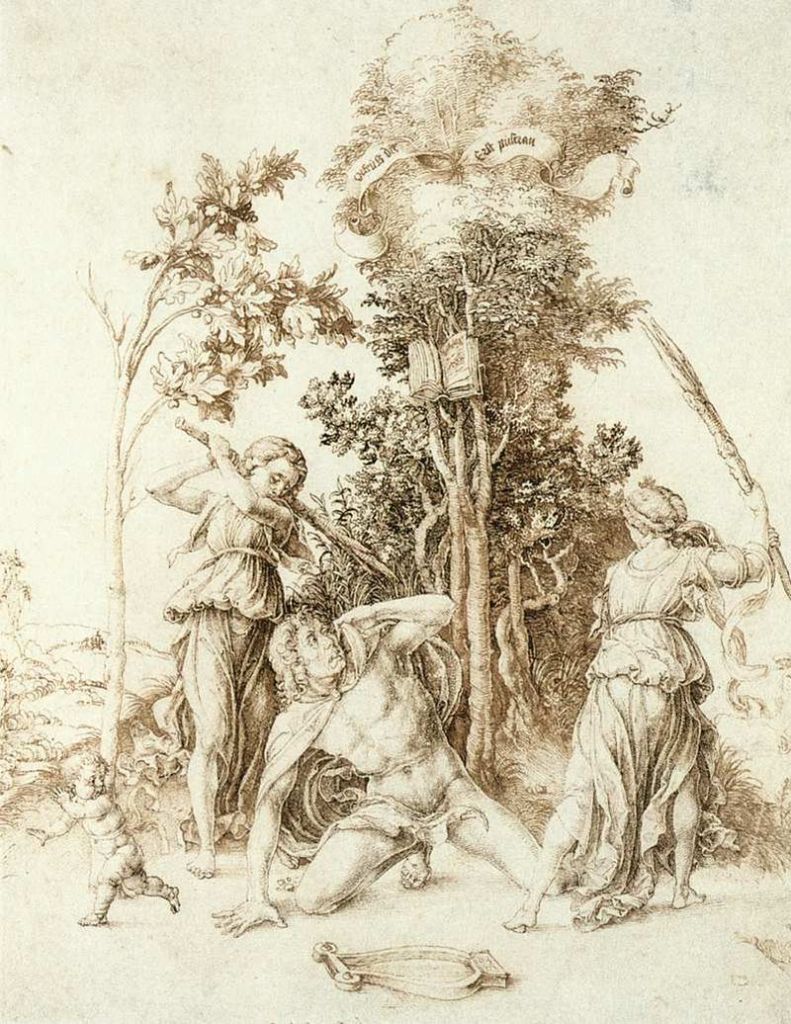 The banner at the top leaves the observer in no doubt as to the reason for this outburst of female cruelty. It reads “Orpheus, the first pederast”.

Strangely, this part of the story seems to have been lost in the mists of time. Otherwise, the organisers of Golden Orpheus, a major East European pop music contest, could be held responsible for something even more horrible than promoting dreadful singing.

This summer, I ran into Orpheus in Carrara. The local museum staged a show of Canova’s works,  and I had a chance to get face to face with Orpheus. He does look like an Internet meme, ready for the taking, with his exaggerated facial despair on top of a beautiful neoclassical body.

This disbelief, I guess, eventually killed neo classicism. Beautiful suffering or the suffering of the beautiful is a difficult concept to have faith in. In today’s glamorous world it’s the non-beautiful who struggle in pain and vain.

This is also why contemporary attempts at revival of neo-classicism invariably end up in kitsch.