I can understand why painters love sunrises and sunsets. They sell well. Both are visually striking, symbolically linked to new beginnings or twilight romanticism, but above all, it is possible to paint them in a more striking manner than what the reality is offering us within its daily urban diet. People who live in cities don’t see much of either anyway.

Why then do painters miss out on volcano eruptions? I feel there’s demand for them among the adventurous, explosive, and testosterone rich.

Look at Etna, informing Sicily that the planet was feeling a bit flatulent the other day.

Imagine this photograph to be a painting though.

I bet art critics would write it off as a painter’s reference to a childhood accident with a box of matches, and what the painter’s father said about it afterwards. Critics would scoff at the painter’s implied intent to give the viewer cheap thrills through overdramatisation.

And, you know, I’d be among those critics too. We say “wow” to a photograph like this without questioning it (I hope you think it’s awesome too), because a photograph of an eruption has the documentary quality of a fact in much the same way that a painting doesn’t.

A painter invents and creates conflict in his work, and to avoid copying from a photograph, he would have to make the conflict more…dramatic, because there is no point in making it less dramatic. And, trying to make it “better” the painter would make it false and pretentious.

Indeed, in all the history of art, only a few volcano paintings are worth a second glance.

So, what do the famous painted eruptions have that makes them interesting?

Some of the eruption paintings are pure documentaries of artistic experiences. A modern consumer may not believe it, but before smart phones, artists usually had to be physically present at an eruption scene to sketch and remember it. Alas, these documentary illustrations have lost all their illustrative value once the public got access to colour photos.

It is surprising, really, how few eruption artworks proved to be disruptive enough to stay in art history. The ones that remained are less about volcanos and more about their impact on the surrounding nature and people.

Joseph Wright of Derby, an English painter, more known for his Caravaggio-styled paintings of scientific advancement in 18th-century England and failed attempts to win clients from Gainsborough, set the tone for volcano painting with dozens of works inspired by Mount Vesuvius activity he witnessed in Italy (he missed the big eruption that happened a few years after he left Napoli).

His set the golden compositional standard for the theme: he would contrast tranquility of the sea and the dead light of the full moon against the startingly alive fire of the volcano, throwing in a few people at the foreground, who watched the eruption apprehensively or were doing their usual stuff while stealing alarmed glances at the mountain going whoopee.

At the bottom of the last painting, there’s a group of people carrying the body of a victim along the banks of a lava river. While the scene is intended to be dramatic, somehow, it loses out to the conflict in the skies and becomes an unnecessary sideline plot:

Wright’s approach to the portrayal of eruptions gave rise to a whole school of painting, appropriately named the Volcano School that existed in the Aloha State in the late 19th century. It consisted of two dozens of non-native artists lured to the islands’ non-stop volcano activity. None of them could take the theme beyond the compositional ideas of Joseph Wright, so I am not showcasing their work.

Some forty years after Wright, Johan Christian Dahl, a Norwegian artist, witnessed a real eruption of Vesuvius, and created one of the most striking images of volcanos, shifting the focus from Man as Victim, to Man as Explorer (though many believe it is about Man as a curious-idiot-who-doesn’t-know-when-to take-cover-until-it’s-too-late).

Unlike Wright, Dahl witnessed the real eruption and was decidedly true to nature (this is a photo of an Aloha volcano):

Still, just like Wright, Dahl tried to embrace the unembraceable by squeezing a massive eruption scene and two tourists with their guides and mules into a single painting. The human aspect of the story was pushed to the sidelines, again. 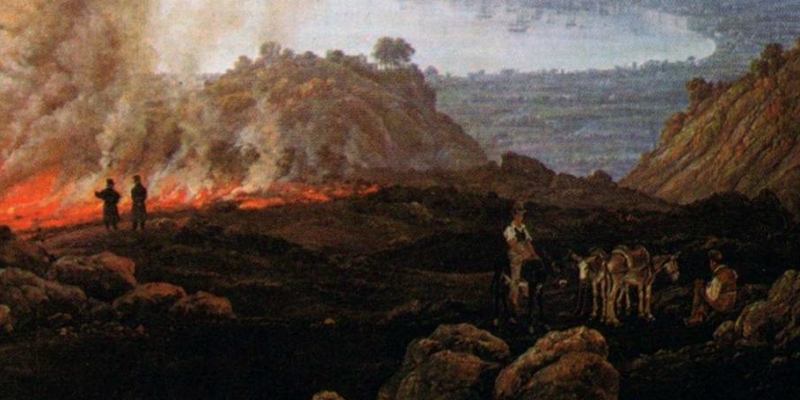 Dahl would then rework the painting several times to highlight the travellers, adding more contrast to the figures and reducing their numbers, but that didn’t amount to much:

The artist who realised that you don’t have to show the whole eruption to convey its horror and beauty, was a Russian.

Nikolai Yaroshenko painted this Man Vs. Nature statement in 1898. It is unfair that it is virtually unknown.

The two tiny figures at the edge of the crater stand firmly in stark contrast against the unfathomable power of the volcano, and the stones that blast out and would start falling any moment make me, the viewer, cringe and awe at the courage of the explorers.

In terms of colour, this is a clever piece too.

Yaroshenko reinforces the conflict by using complimentary colours. He contrasts the green shoulder of the crater against the red of the fire inside it, and the orange lighting of the cloud of smoke in the centre with the blue shading of the mountains at the back.

The most famous volcano painting was also done by a Russian artist who lived in Italy at the time. It is the Last Day of Pompeii by Karl Bryullov.

When exhibited in Milan for the first time, it brought Bryullov (who was 30 at the time) to such fame that people in theatres would stand up and applause him whenever they’d notice him entering, and admirers would literally lift him up in their hands and carry their hero through Milanese streets if they saw him walking.

This painting is a great example of classicism fused with romanticism, as well as Bryullov’s passion towards a beautiful Russian princess who posed for one of the women in the painting.

But, as it is not, really, about a volcano eruption, I will not talk about it, except for one thing. Everyone is running, stumbling and trying to get away in this painting. And yet, its composition is constructed in such a way that you KNOW they won’t escape from the box of the painting. Take a moment to reflect on how this is achieved, it’s fun.

Surprisingly, volcano art ends here. I’ve got nothing else to show. How tiny is this heritage if compared to millions of sunrises and sunsets you find in galleries and museums!

The irony in this comparison is that without volcanos some of the most famous sunsets would not exist.

A group of Greek and German scientists studied  red-to-green ratios in sunsets by famous masters and discovered that the more artistically and emotionally sticking sunsets were painted in the years immediately following volcanic eruptions that created a imbalance in the atmosphere resulting in sunsets having more reds and oranges with greens and blues filtered out by ash particles.

This link takes you to their paper, which you will have no problem to understand if you have a Physics PhD in your pocket or a healthy dose of masochism in your character.

PS. Before you click out of this blog, please tell me if you are interested in me talking more about Bryullov or romantic classicism makes you sick.

And if you missed my previous post on art use in movies, check it out – I’d love to know what you think.