Part I is here, and it covers Ancient Greece, Rome, and the Dark Middle Ages.

To stay true to the subject, we will see how a plague of the past edged Durer to create a masterpiece on women’s empowerment; why Titian’s Europa was a justification of rape, how Veronese was a 16th-century Tinto Brass; and end with an artist who celebrated the harmony of human and animal forms in a way that puts Ingres to shame today.

Since 1385 Europa and the Bull had been sailing through the pages of manuscripts as mere illustrations until they hit shore in 1445, this time, in a sculptural form – and found themselves right at the gates of the Renaissance. It is not a metaphor – they were put on the new gates of the old St.Peter cathedral in the Vatican.

When Pope Eugene IV ordered these doors from Filarete, a B-list Florentine artist, he insisted on a mix of biblical and mythical scenes to celebrate papal achievements in forging the unification (albeit, temporary) of the Catholic and Eastern Churches. It was a time of rediscovery of the classical past, and ancient myths were seen as a bridge between the past and present, the East and West, the bridge that Pope Eugene IV designed. Besides, Europa had a special mission: she symbolised the return of the previously lost orthodox souls into the fold. The doors, installed in 1445, are still there. You can find a relief of Europa riding the Bull at the bottom of the left fold if you happen to get to the Vatican, but there’s nothing extraordinary about the image save for the fact of its appearance.

You may wonder why Europa was placed at the bottom of these huge doors, lost in a crowd of other images, almost an afterthought of the artist’s medieval mind suffering from “classics” overload.

The rationale behind Europa’s giving precedence to other classical myths is two-fold. First, it was taking a severe strain of imagination to equal rape to redemption, even at the times when rape was allegedly much more common. For artists, it was easier to stay away from it than explain the controversy. Second, the story was not violent enough. Europa’s tale, if taken at face value, is almost a situation comedy with a happy ending. Apart from the abduction moment, there’s no tension. Europa’s initial shock is soon remedied by a barrage of Cupid’s arrows, the climax (sex on the beach with a god) is followed by the birth of three healthy sons who become kings, and in the end, no one dies! No torture, no slain dragons – medieval people wouldn’t buy it.

The myth, if interpreted as a celebration of the classical past, with the rape conveniently omitted, becomes textbook boring. This triumphantly looking virgin is ready to attest to it.

You may notice the sculpture’s similarity to the 1385 illustration, except that the Bull is more regal and less lively in the latter. I estimate that less than 1 per cent of all relevant images show Europa not holding one of the horns, so these two must be related.

In 1497 a new edition of Ovid was published in Venice: “Ovidio metamorphoseos vulgare”. Its illustrator attempted to add drama to the story by showing readers the story in its entirety, and it was the first time this myth got comic-stripped. 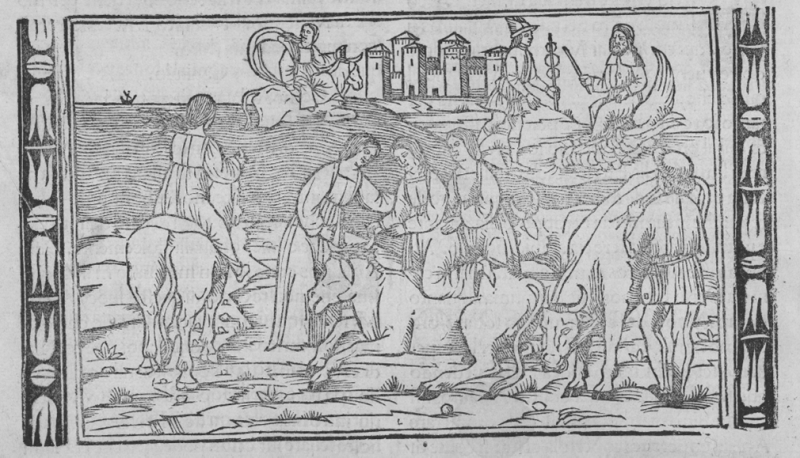 Here, the artist flaunts his skills in compositional inventiveness. He places all the scenes in a clockwise oval with perfect spacing between the plot-moving events. He begins with Zeus ordering Hermes to pretend a shepherd and bring the king’s herd to the shore (1), continues with Hermes doing Zeus’s bidding (2), then shows Europa being helped on the Bull by her unsuspecting maids (3), and the Bull’s siding closer to the sea (4), and ends the story with the Bull coming ashore in Crete (6). 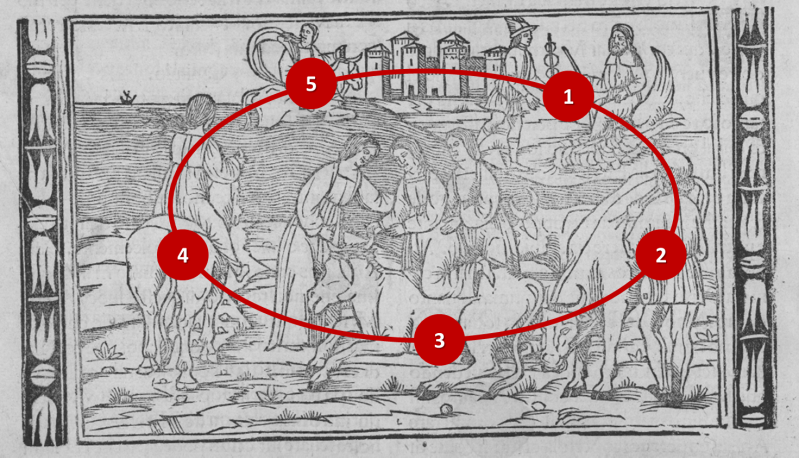 However neatly it is composed, the picture is also a good example of the simple truth that explaining everything is often telling nothing: there is no emotion here, even in comparison to the 1385 manuscript.

It might seem this controversial and boring myth was going to be shelved for another millennium were it not for the ability of Renaissance artists to distil passion from anything related to love, however violent or unseemly.

In 1494 a young German artist, Albrecht Durer, on a flight from a plague outbreak in his home town of Nuremberg, arrived at Venice to have a firsthand experience of ancient art and learn a trick or two from Giovanni Bellini. After a year of his deep-diving into a new culture (the liberal love practices of the Serenissima Repubblica not excluded), he sketched his own version of the myth. He was 24 then, and 500 years ahead of his time. Let’s look at his Europa and find out why!

Desperate maids, Europa as an Amazon warrior, sea creatures marvelling at the ruckus, the downward diagonal composition that takes Europa and her ride right in front of and past the viewer with such force that one can feel the wind rushing in the wake of the riders. Even today we may blush with embarrassment at the audacious eroticism of Europa – and it is not her exposed breasts, but her disregard for our stare. She does not attempt to cover herself, she’s one with the elements, the same force of nature as the Bull or the sea creatures are.

The drawing is not just perfect – it precedes contemporary view of the myth showing Europa not a victim but a fearless explorer who appropriated the means of transportation, ventured into the known, made a ton of discoveries, and had a lot of fun along the way.

From this moment in time, the myth of Europa forked out in its artistic interpretation. This chart summarises the paths different artists were taking:

While Durer’s sketch combines both violent emotions and eroticism, artists who followed him preferred a single focus.

Violence could be expressed in a mild form, as in this Baldassare Peruzzi’s fresco in Villa Farnesina (1510), a friend of Raphael:

This soft-porn relief was made the same year as Durer’s sketch.

And clients didn’t have to wait long for some hardcore stuff to appear:

In 1557, Lyon printers published a book of Metamorphoses illustrated by Bernard Salomon. In an instant (or whatever stood for “instant” when information travelled at the speed of a horse-drawn carriage) it became a must-have. Its reprints and even fakes spread all over Europe, boosting the popularity of ancient myths.

Salomon’s book (one of the first examples of poetic and visual unity) also established a canon for the depiction of Europa’s myth: a soft mix of violence and eroticism.

So, when Titian started working on his mythological series for Philippe II, the King of Spain, he and his client both had a solid reference point.

Titian faithfully followed the canonical recipe: take the full measure of a naked virgin, mix it with a pinch of desperation, add thrashing about (generously), spice it with applicable metaphors and symbols, take downpayment, serve.

It is still a magnificent work of art that has inspired generations of artists.

Titian’s work did not just provide a justification for rape, it provided the rape experience as well. You, the all-powerful Jupiter, can maim and rape, and the virgin may feel unhappy at first. Still, in the long run, it’s going to turn out all right: look at what happened to Europa – she became royalty, and her son Midas became a wise king, rich beyond the imagination of Jeffrey Bezos.

I am not even talking about the mastery of colour here.

But – let me ask you – isn’t Durer’s simple sketch still more…inspired? And more inspiring and humane?

Twenty years later, Titian was followed by his rival, Paolo Veronese (who was forty years younger than Titian) in bringing the Europa myth to life. Today, Veronese would be – no doubt about that – a director of films with star casts and many extras. He was the first artist to set up spotlights in paintings and orchestrate scenes as a modern theatre manager would, but most importantly, he was a master of detail.

The balance of violence and eroticism is shifted heavily towards the latter.

While showing the whole story in different parts of the painting may seem excessively didactic at the age when educated people knew it by heart, everything else is far from being dull. This is almost Baroque, some thirty years before it officially began.

It is a massive, spectacular, and mildly arousing piece (even if foot fetish is not your thing), but… I still think Durer was looking down at Paolo with sympathetic regret: such a great talent wasted on commercial trash!

I want to close the Renaissance part with an engraving after a fresco by Il Rosso from Florence, an obvious follower of Michelangelo and one of the main artists of Château de Fontainebleau. It is 1540 – even before similar works by Titian or Veronese – but look at how modern it is.

It was meant as a reminder that goodness comes from humans living in harmony with animals (what a strange interpretation of the myth), but I think it achieved something more. The unity of their bodies, the way that she is ruling the Bull holding his horn rather than grasping it in desperation, show equality of two strong beings.

And the moment I thought I wouldn’t be surprised to find Rosso’s work on a feminist poster – ooh-la-la – I didn’t have to wait long.

The myth of Europa, COVID, Durer, Il Rosso, hype culture and cowgirl attitude all come together in one picture, except that in this case instead of having three sons, she may end up with a single case of acute cystitis.

Baroque, Rembrandt and maybe even Modernists are next!