While Part III of Europa’s myth is in the oven, here’s an appetiser quiz about Rubens and Titian.

Can you spot the differences between them, save for the obvious one, in the colour palette?

They are almost identical from afar, but hi-res pics of Titian and Rubens can provide you with enough detail to keep you safe at home for the next couple of hours. These details, however small, tell an interesting story about Jesuits’ appetite for propaganda and high society’s desire for pleasure.

So, assuming you now decided to have a break from straining your eyes at the details of both paintings, here’s a bit of historical context.

On his first 8-year stay in Italy (1600-1608), 23+ years old Rubens was more into Raphael, Michelangelo, Veronese, and the School of Bologna. They all were about gracious, clearly defined lines that we like to call “classical” today. The inventive, curvacious and dynamic lines that help us point at a Baroque painting and remark with smug confidence, “Hey, that’s Baroque” were just beginning to emerge.

Titian, dead for twenty-five years by that time, had been an ocean away from his contemporaries, especially during his last 15 years. He was about fields of shimmering colour and blurred shapes. Cut out a small square from a Titian painting, and you get a baby Rothko.

Here, this shimmering effect is achieved by orchestrating warm (orange) and cold (blue) colours in a way that they diffuse into each other. The fact that they are complimentary helps the eye to become drawn to their visual conflict and interplay of fuzzy layers of paint.

Sometimes, Titian would put minor characters and objects in his paintings so much out of focus, viewers couldn’t decipher what or whom he meant to depict.

Rubens knew about Titian and even made a few copies of his works (he was copying everything worthy of notice at the time), but he didn’t care much for the Venetian Genius then.

In 1608, Rubens returned to Antwerp, and – through hard work and ingenious socialising – made a career that was unfathomable for the son of a disgraced lawyer who narrowly escaped decapitation, having been discovered in bed with his client, the wife of the Prince of Orange (the future founder of the Netherlands), also known as William the Silent. Conjugal infidelity was not an issue he would agree to put on mute, though.

In 1609, Spain and the Netherlands signed a 12-year truce. Flanders could finally take a breath. Their economy was up, their aristocracy could renew receptions and balls, their artists could return to their easels.

Jesuits flooded the country, intent on bringing catholicism back to its glory. They were looking for art that would work as powerful propaganda – something more dramatic and grandiose than the rigid style of the Northern Renaissance. Secular high society wanted to celebrate the rebound of hedonism, so they also wanted art to be bigger-than-life, expressive, and, whenever possible, eroticised.

Rubens was ideally positioned to offer all three: size, expressiveness, and eroticism. He was well versed in Veronese’s massive compositions, had a perfect knowledge of the School of Bologna’s expressive lines, and had copied enough of Michelangelo to paint monumental nudes with the ease of Shakespeare coining metaphors. The novel style would later become known as Early Baroque, and Rubens was its prophet and most skilled practitioner.

He soon became Frander’s court painter, a nobleman, owner of an art factory employing dozens of artists, and an ambassador for the reigning queen. Politically, he was, perhaps, the only sane person in the whole of Europe at the time, advocating for the peaceful coexistence of nations and religions that would help each country prosper unhindered by needless losses of life and resources. His stance on peace&prosperity coupled with his infamous charm made Isabella, the Sovereign of Flanders, sent him to Spain in 1628 as her representative.

His mission was to mediate a peace treaty between Spain and England, and it would take him two years to have all the parties reconciled (he ultimately succeeded!). In the meantime, he achieved something equally important in the art department. He rediscovered Titian in the collection of Spanish king Philip IV. It must have been quite painful to realise that Titian was more than half a century ahead of his time. So, Rubens started copying Titian’s works by the dozen, and The Rape of Europa was one of them.

Young Velazques (appointed court painter a few years earlier) was assigned to accompany Rubens and help him in all matters artistic. He must have felt envious. Velazques’ dream was to become a wealthy nobleman too, but the process of rising to the ranks of aristocracy in Madrid was immeasurably more complicated than in Flanders and didn’t quite agree with wealth: to become a nobleman, Velazquez would have to prove that he’d never sold anything made with his hands, and was only getting money from royal commissions. Velazques’ dream of nobility wouldn’t come true for another thirty years, and then he would have only two years left to enjoy it. Sad.

So, back to Rubens, who had been contemplating quitting his artistic career in favour of diplomatic one before his shocking rediscovery of Titian. Velazquez, who was providing canvases, paints, and, possibly, insights into the workings of the Spanish court, is really an accessory to the story: I simply enjoy imagining Rubens saying, “Diego, hold my beer”.

If you’ve made it this far through history, here’s a reminder of the ways Titian’s painting was meant to work on the viewer from the previous chapter:

Now, let’s get down to details and see how the history bit would help us.

Titian’s space is ominous and dramatic, Rubens’s is light and airy. For Rubens (and his clientele), Europa’s myth was an opportunity to dial up eroticism, not impose a moral lesson. Rubens and his customers were devout catholics and no artist could jump-start painting nudes unless they were related to a classical myth. And once you’ve got a fable with a naked woman in it, why in the holy Ovid would you waste your chance at titillating the public, and on what, moralising?

So, once I’ve mentioned it, let eroticism come second.

Rubens added size and machismo to the bull’s head which made it obviously hotter. Jupiter inside is puffing his lust at us through his blown-out nostrils and smiling in anticipation. Still, I vote Titian here because of his consistency. If the composition is about the viewer raping Europa with his eyes, then why would you create a competitor?

Rubens went even further than this, he made Europa dressed in transparent curtain lace:

But somehow, instead of making Europa sexier, he just made it all messier.

Now we come to the contours, the clarity of lines, the third difference.

I believe you remember that Rubens at the time still favoured line over colour. 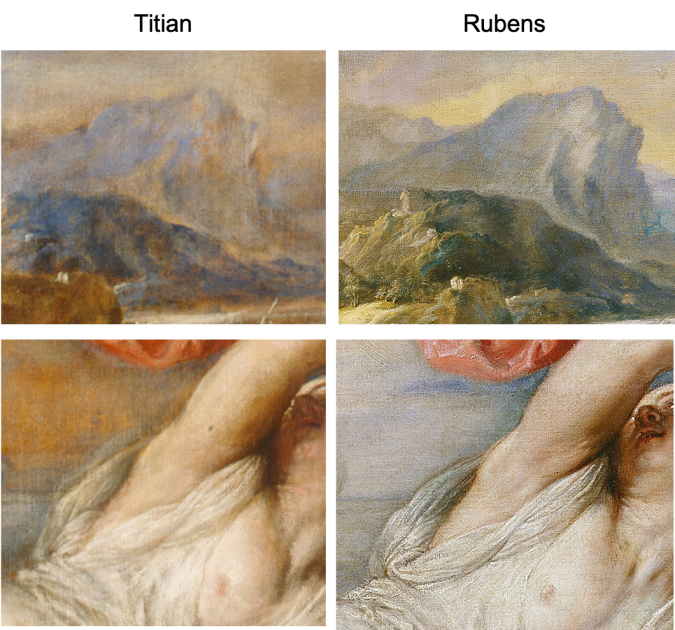 Lines in Titian’s work are born out of two or more colour fields colliding or gently touching each other. For Rubens, the line comes first, and it separates shapes that afterwards are given their due volume by colour modelling when thin glazes are added to achieve tonal variation.

This is why Rubens failed to copy one of the most critical details in Titian’s painting:

As Europa’s cloak gets soaked in water, it sinks and is only kept near the surface because the Bull is running at Michael Phelps’s speed, leaving a swirl behind. In Titian’s Europa, it is a spot of wonder, where flesh, water, and cloth are all mixed up together in a blur.

Rubens’s painting approach, with contours delineating colour areas, just couldn’t work here. He had to take Europa’s cloak out of the water, blow-dry it, put it on top of the sea surface, remove the swirl and cross fingers we wouldn’t notice. 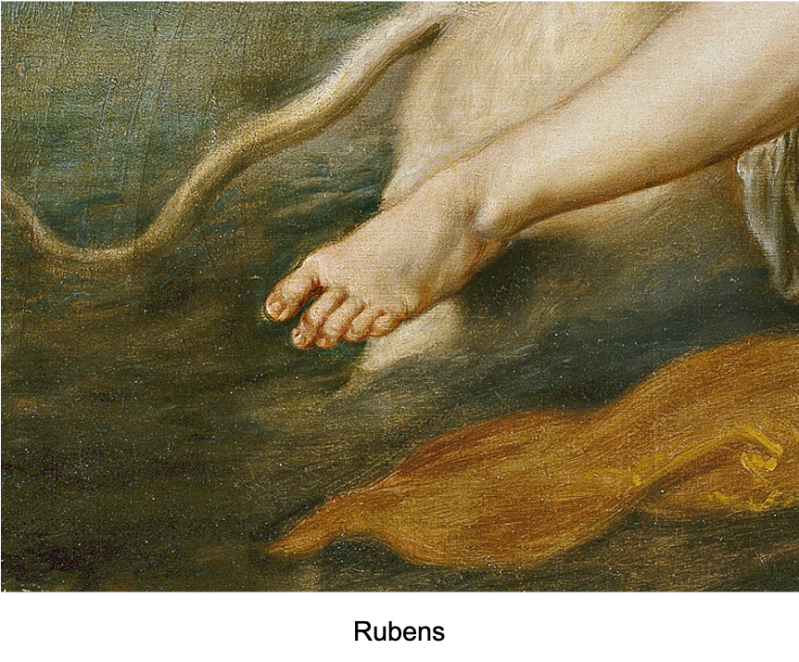 My guess is getting rid of the swirl cost the Bull at least 50% of the torque.

And, of course, Rubens’s line-based approach married to his intent to max out expressiveness from anything that was exhibiting an emotion killed a lot of air in the painting (this was the Achille’s foot of Veronese paintings too) I wrote earlier that Titian separated his main object from auxiliaries by losing detail in the latter. Distorted, often magnified air perspective was his principal tool.

Rubens’s maidens on the shore are as clearly defined as if they are not farther than fifty feet from us. This makes Rubens’s background the work of a stage designer. In the last ten years of his life, Rubens would finally master Titian’s tricks.

And, finally, a kind of detail that is not really important, but just a fun fact. The eyes.

Rubens’s were run-of-the-mill, while Titian cared about the individuality of even the smallest fish. Rubens felt it too, I guess – and he tried to follow Titian even in this rather minute detail in his later years.

Titian would remain Rubens’s mentor for the rest of his life. Upon Rubens’s death, the inventory of his estate included 9 paintings by Titian and 33 copies, two of which were signed as Rubens’s own work.

When Titian dropped his brush, the King of Spain instantly stooped to pick it up for him. After Titian put his brush aside, 70 years passed before the artist, who could claim to have truly picked it up, straightened up.