The Baroque was a Catholic invention, but its ideas soon spread into the Protestant world. As a rule, artists from Protestant countries would visit the Catholic South to educate themselves in Italian art, but even if they never did (like Rembrandt), they could find plenty of it in Holland or Germany. Imported sculptures and paintings could be seen at wealthy homes, guild offices and state halls, and the stream of printed engravings provided updates of the latest trends. When Rubens – upon his return to Antwerp from Italy in 1609 – set up his studio that would soon grow into a painting factory, he also established a print shop to secure fast and wide distribution of engravings after his paintings. It would make his work accessible to all, everywhere. If this fact was known outside of the community of art historians, we might end up with “rubensing” posts rather than “retweeting” or sharing.

The Catholic Baroque might have been the father to its Protestant followers, but its offspring grew to be different enough to be re-packaged as the Lutheran Baroque by future art historians. What could be different about the myth of Europa though, a simple story with a linear plot, fixed character roles, and known outcome?

Reformation: did it set women free or lock them up?

As I am using a virgin abducted and raped by a god to travel through art history, the changing role of women during the Reformation can’t be ignored. If it had an impact on artists, it must have influenced their art.

If you ask a Protestant whether the Reformation was good for women, he or she will say, yes, definitely. Women were liberated from monasteries, could finally read and study the Bible in their vernacular language, and with their social roles fixed as Mothers and Housewives, they had to learn reading, writing and some basic math to be able to run their households. Their new skills coupled with a broader awareness of the equality of men and women – something they could now read about in the Bible – gave them a new degree of freedom.

A Catholic may see it differently: women, who had chosen to become nuns, lost their freedom, were forced into marriage and had to abandon the active role in society that monasteries had been providing through education, arts, institutional charity, and participation in the life of their communities. It is not a fact, they would argue, that Protestant countries had more educated women if you subtract educated nuns; as for the Bible, reading it without a proper commentary by robed-men-who-always-knew-better made women understand it literally, which set them on a path away from God and wisdom. Besides, in a Catholic society, a woman had a choice. She could put on the monastic habit or a kitchen apron, but Protestants locked up women exclusively in their homes. In the end, women were getting fewer degrees of freedom there.

I’ve read a contemporary Catholic argument that the emergence of feminism in the Protestant countries long before this movement reached the Catholics is another proof of the loss of women’s freedom during the Reformation. They say the Protestant way of life exhausted women’s patience in three centuries, while Catholic grooming had maintained them happy and content for fifteen hundred years.

While the last argument is as valid as a statement that the absence of feminism in some Gulf countries means women are more liberated there than, say, in France or the UK, there’s truth in both points of view.

Women were domesticated by the Reformation at an ever-increasing rate, but they were also getting smarter along the way.

I am sure you can’t wait to see a domesticated Europa now.

Catholics, rejoice! Amen, it is painted proof of your argument. Neither the Bull nor the Princess is willing to go anywhere. A maid is taking the Bull by its horn – god or no god – to its destination, and all she cares about is keeping her dress dry. Europa seems resigned, bidding her farewell to a friend. The virgin Princess is forced into a marriage, and it’s not something she’s excited about. It is not some brute force, no. It is the dull coercion of societal norms. No cupids, no love, just dredging through shallow waters. No one is happy in this picture, not even the reluctant bull, seen off by his own girlfriend up on the hill.

It could be the saddest realistic picture of all time if the Russian artist Pukirev didn’t paint The Mesalliance in 1863.

Fortunately for us, Protestants were purging churches of art but allowed and encouraged it at public spaces and private homes. Artists could still find clients who wanted to indulge their basic instincts away from the public eye.

Free of the ideological tenets of the Catholic Church, artists could go the full monty if they wanted to.

Truth be told, van Everdingen was rather a Classicist than a Baroque painter. Perhaps, he was simply stuck in the past, or, on the opposite, had managed to peek into the late 18th century and foresee the Neo-Classicism? We can’t know it for sure as he had a nasty habit of not signing his work, so very few of his paintings are known to exist.

Fortunately, Rembrandt always signed his work with his unique style at least. When he was in his early twenties, a wealthy merchant commissioned him to paint the Abduction of Europa.

Wikipedia discusses it in great detail, so I’ll just add on top that Rembrandt succeeded in marrying the ancient myth to the current Protestant narrative on the value of industriousness, reason, and modesty.

This is how he did it (read comments by the numbers): It is unlikely that Zeus was contemplating the risks and margins of international trade while abducting a hot red-haired girl. Yet, Rembrandt made the ancient god an active economic player in the Protestant version of the story – perhaps, more important than Europa herself. Europa represents exotic cargo, but Zeus is the vessel that takes the goods to Holland. If Japan doesn’t want to trade, no problem – we’ll go to China or Korea! We’d stay afloat as long as we have ships for the goods and cranes to unload them.

Note how uniquely far Rembrandt and his client took Europa from the sex theme.

But the role of Rembrandt’s client is even more unique – so different to anything we’ve seen so far! When the King of Spain was looking at Titian’s Europa, he was identifying himself with the Bull. When Pople Alexander VII was looking at Lorrain’s landscaped myth, he was the enlightened art connoisseur. When the client of van Everdingen was *** at his 5 nude maidens, he was an average jerk. Rembrand’s merchant was that proverbial guy who whistled all the way to the bank. Zeus was hauling goods for him, and he was pocketing the profits.

There is a lesson here for contemporary artists, however immoral it may be. Pitch an oligarch with something that echoes his business. Position him as the beneficiary of whatever action is taking place in or around your art. Get rich. The only challenge here is to find that “something”, but the fact that Rembrandt pulled it off 400 years ago should be an encouragement. Oh, and find a gallerist or curator who can explain your idea to the oligarch.

Now I can sum up the Catholic and Lutheran Baroque on one page: 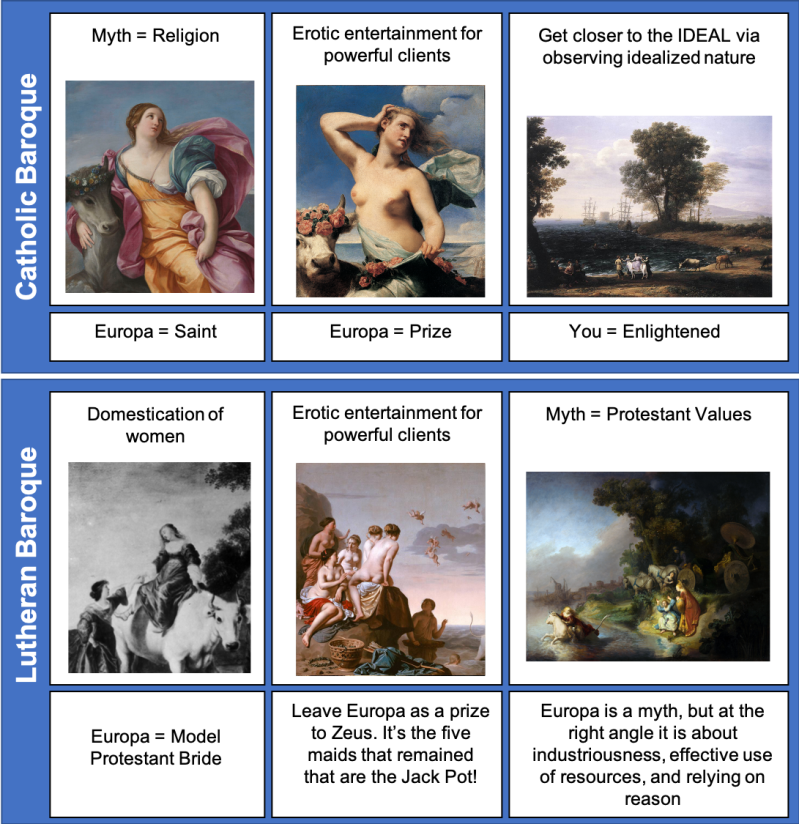 What fascinates me, is that no other myth has been changing its meaning so much and so often in the history of art.

We are having the Rococo soon, in Part V…and don’t forget to “rubens” this post!

In case you missed the previous chapters:

Part I – In Antiquity, the age of discovery and adventure, the myth of Europa was a prologue to more exciting stories. Europa was not a victim, just a participant in the grand scheme of things.

Part II – Late Middle Ages and the Renaissance: Search for emotions in the plot and a new meaning of the story. Durer vs Titian. Artists discovered that high-level emotions can be combined with violence and eroticism. First signs of women’s empowerment in art with Europa’s making the Bull do her bidding.

Quiz: Why Rubens copied Titian’s Rape differently to the original and what conjugal infidelity, Jesuits and Velazquez had to do with it

Part III – During the Catholic Baroque, Europa was seen as a saint or a prized whore, but Claude Lorrain made her into a device that allowed his clients to show off their enlightened character.